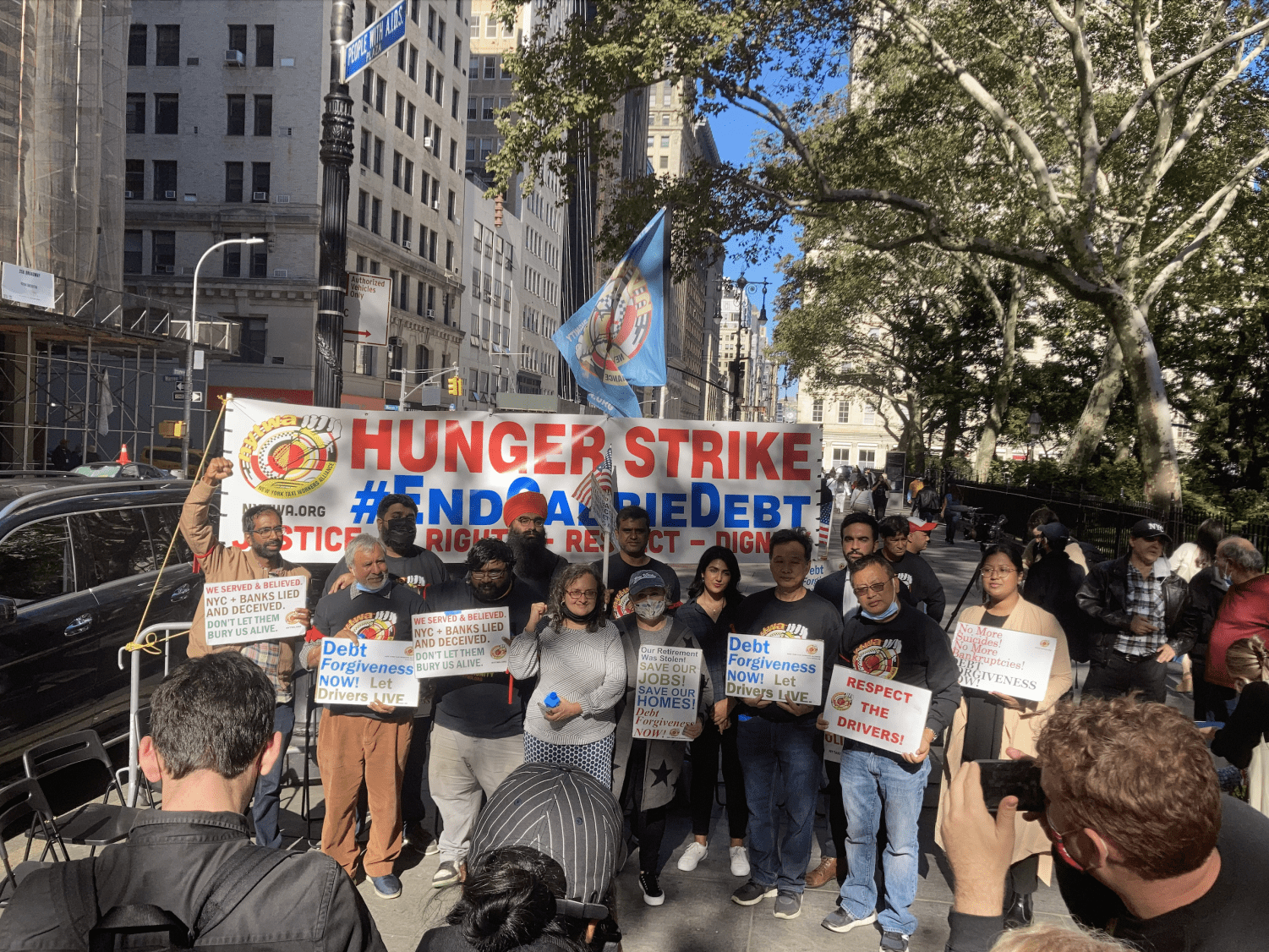 Members of the Taxi Workers Alliance began their hunger strike on October 28th, others from within and outside of the union would join them in the coming days. (AIDAN LANE)

Members of the Taxi Workers Alliance began their hunger strike on October 28th, others from within and outside of the union would join them in the coming days.

After a 45-day strike, NYC taxi drivers celebrate a victory in their fight for debt relief

On a warm, blue-skied afternoon, the Taxi Workers Alliance (TWA) gathered on the corner of Murray Street and Broadway outside of City Hall. They had been protesting there for 31 days — all day, all night — but on that day, Wednesday, Oct. 28, there was more commotion and media, and the stakes were higher.

The striking cabbies were about to launch a hunger strike.

Since Uber began business in NYC in 2011 and Lyft entered the industry in 2014, ride-hail companies have waged a war against NYC yellow cabs, controlling more and more of the market each year. Until 2017, the ride-hail industry had yet to win, but that year Uber served more riders than NYC taxis. The war certainly seemed over.

“I’ve been coming to this building, city hall, since 2017 asking for help, asking for mercy, because they turned my dream into a nightmare.”Mouhamadou Aliyu, taxi driver

In 2014, the New York City Taxi and Limousine Commission (TLC) had its last auction of Taxi Medallions, the license required for drivers to operate yellow cabs in NYC. TLC is the regulatory body of all for-hire car services in the city. The starting price for a single medallion was $850,000. The estimated price of a medallion today is $100,000. The average driver’s debt is around $600,000.

As a result of the Uber and Lyft takeover, NYC’s taxi drivers have suffered. Thousands foreclosed on their medallion loans, with many forced to spend their retirement savings and work long days for dwindling earnings.

“We have a lot of drivers who are in their 60s — some are even pushing their 70s — that have no retirement,” Augustine Tang, a taxi driver and strike organizer, said. “They want to go back out to work, but they don’t want to be trapped behind the wheel, basically in indentured servitude, working to pay off the loan that they will never be able to pay back.”

The medallion market collapse struck at the heart of these cabbies’ very existence, as city officials offered taxi medallions to immigrants as a way of achieving their coveted “American dream.”

“They were going to airports saying, ‘Hey look, you have a chance to get to the middle class,’ that the medallion is better than the stock market, that it was even a worry-free retirement for these guys,” Tang said.

Mouhamadou Aliyu, a taxi driver since 2001 and an immigrant from Ivory Coast, said he is pained by the destruction of his dream.

“I’ve been coming to this building, city hall, since 2017 asking for help, asking for mercy, because they turned my dream into a nightmare,” he said. “They destroyed my life. They took the American Dream away from me.”

On Sept. 18, the TLC finally proposed a debt relief plan for the drivers. It would cost the city $65 million and cap driver debt payments at around $1,600 a month. There would be no city-backed guarantee on medallion loans, meaning drivers would still be at risk of foreclosure and bankruptcy.

Organizers said the TLC’s plan was way too little, way too late. A strike was necessary.

“I was trying to build a better life for my kids and the system just destroyed the whole thing.”Mouhamadou Aliyu

In 2015, the city declined to cap the number of ride-hail drivers in NYC. They later did so, but in 2019 the cap was struck down in court. There are now more than 130,000 ride-hail drivers in NYC, compared to 13,587 medallions, half of which are not currently being used due to fear of bankruptcy. This means there are only about 7,000 active cabbies in the city.

Tang said he inherited his medallion from his father, who passed away six years ago. Along with the medallion, he inherited $530,000 in debt.

“I decided to keep it — really just to carry on his legacy and keep the medallion in the family,” he said. “Five years ago I didn’t know anything about driving a taxi, about the medallion. I didn’t know how much goes into a taxi, how much expense and hardship was going to come from all the for-hire vehicles that were flooding the city.”

After 45 days of protest, with 14 of the strikers on a two-week hunger strike, the drivers have become a family. During the protests, the drivers showed infinite compassion for each other and for their respective struggles. Each striker was friendly, welcoming and calm — sometimes almost joyful. But as the protest would heat up, the raw emotion of their fury and of their sadness was palpable.

“I was trying to build a better life for my kids and the system just destroyed the whole thing,” Aliyu said. “It’s too much pain. The suffering’s unbearable.”

Jimmy Lai, a Malaysian immigrant who has worked as a taxi driver for 17 years, is also in massive debt, but said his struggles are nothing in comparison to older drivers.

“I know one driver from Hong Kong. He started to drive in 1973. It’s been 48 years already. They lost all their retirement. This is a disaster,” Lai said.

It was through their resiliency that the TWA finally won. On Nov. 3, with the support of the entire NYC congressional delegation and more than 70 current state senators and assembly members, the city accepted a slightly modified version of the TWA debt relief proposal. The proposal included a debt cap at $170,000, monthly payments of around $1,100 and a city-backed guarantee if drivers can’t make those payments.

After the city and TWA announced they had come to an agreement, the protest became a celebration. Those on hunger strike could finally eat and those who had forgone work for a month and a half could go back to supporting their families.

Their victory takes place amid the backdrop of a national surge in union strikes and an increase in public support of labor.

While NYC taxi drivers have won this fight, the very existence of yellow cabs is still at stake. Ride-hail companies continue to dominate the market, and in order to make their $1,100-a-month payments, drivers will still need to work long hours.

But not everything is going the way of ride-hail companies. This summer, taxi usage went up 5% while ride-hail use declined 15%, in part due to the shortage of drivers amid the pandemic.

The years ahead contain more uncertainty than answers.

With the Curb app designed to promote NYC taxis, cabs seem ready for more riders. The app has lower fares than Uber and Lyft, no surge pricing, and it gives drivers more money than competitors.

Uber has no plans of giving up its market share, as the company is in talks with TLC to offer taxis operated by medallion-owning drivers a place on its app. 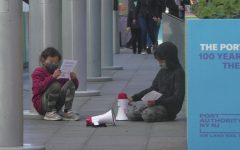 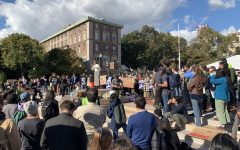 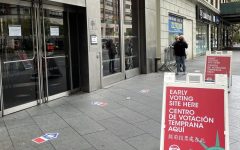 “I can’t stand them,” he said. “We paid over a million dollars for this thing (the medallion). They came in and got it for free. This is why we’re here now, protesting the predatory lending.”

For now, yellow taxi drivers can enjoy their hard-earned victory, but the years ahead contain more uncertainty than answers. 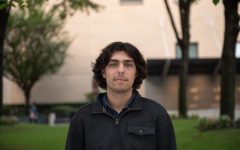 Aidan Lane (they/them), FCLC ‘23, is an assistant features editor for The Observer. They’re a Journalism major minoring in Spanish and New Media and Digital Design. When they’re not looking for people to speak Spanish with, you’ll probably find them in the Lincoln Center practice rooms playing guitar, attempting to learn the drums or listening to every genre imaginable.