Video footage of the game is lost, but photos survive of Fordham’s season opener against Waynesburg, the first ever televised college football game. (PHOTO COURTESY OF FORDHAM ATHLETICS, GRAPHIC ILLUSTRATION BY MADDIE SANDHOLM)

Video footage of the game is lost, but photos survive of Fordham’s season opener against Waynesburg, the first ever televised college football game.

On Sept. 28, 1939, the Rams took on the Yellow Jackets in the first televised game in college football history.

The year was 1939, and Fordham was a football school. Three years removed from the legendary “Seven Blocks of Granite” and three away from a victory in the Sugar Bowl, the Rams were perennial contenders on the national stage. But in the season opener that year against the Waynesburg University (WU) Yellow Jackets, the football powerhouse took yet another leap forward — this time onto the small screen.

On Sept. 28, 1939, the Rams took on the Yellow Jackets in the first televised game in college football history. But to fans at Randall’s Island Stadium, the game was similar to any other Fordham rout in previous years. The differences were minimal: a single camera mounted on the sidelines, two massive Telemobile trucks outside the stadium and radio commentator Bill Stern in a nearly unprecedented role.

In a massive effort sparked by New York’s World Fair, NBC began to pour large sums of money into various sorts of television broadcasting. One of these was live sports coverage, which was already extremely popular on the radio and intrinsically appealing to a visual format.

For a small New York audience tuning in from home, airing any Fordham University game was an obvious choice.

At the time, New York City was the only location in the country with the technology to broadcast such an event. The Telemobile trucks transmitted signals to a tower atop the Empire State Building controlled by the Radio Corporation of America. The audience watching W2XBS, NBC’s experimental TV station at the time, was certainly smaller than the 9,000 fans in attendance. The exact number of viewers varies between sources, but NBC broadcasts at the time were only available to those in the New York area because of a limited transmission range. Meanwhile, household televisions were limited and expensive, at least $4,000 when adjusted for inflation, making them an exclusive commodity for wealthy families.

But for a small New York audience tuning in from home, airing any Fordham University (FU) game was an obvious choice. The maroon-clad marauders from the Bronx were coming off a 1938 season in which they ranked 15th in the country and a 1937 season in which they had been ranked third.

Led by Head Coach Jim Crowley and Athletic Director Jack Coffey, the Rams were one of the most formidable teams on the East Coast by 1939 and had the schedule to prove it. In what was considered “Caligulan cruelty” at the time, Coffey organized one of the hardest schedules in the school’s history, including games against the University of Alabama, Tulane University and the University of Pittsburgh.

Of the matchups on this supposed “suicide schedule,” Waynesburg in the season opener was considered one of the team’s easiest opponents all year. When the two teams played on the same field the previous season, the Rams won handily, 53-0. So when Yellow Jackets left halfback Bob Brooks, WU ’42, broke off a 63-yard touchdown run less than five minutes into the first quarter, fans watching at home had the chance to witness one of the first crowd silencers in television history.

With the extra point, Waynesburg took an early 7-0 lead, but the Rams responded quickly with a score of their own on the following drive. Fordham marched to Waynesburg’s 17-yard line on five straight rushes, and Steve Kazlo, FU ’40, found the end zone on yet another condescendingly easy run. Kazlo made his own extra point to tie the game, 7-7.

By the end of the second quarter, Waynesburg’s early attack was nearly forgotten, as Fordham scored two more touchdowns to take a two-score lead. The first was an evasive 32-yard score by left halfback Leonard Eshmont, FU ’41, who made Waynesburg defenders look silly enough to reportedly evoke laughter from the crowd in attendance.

The second score only came after a complicated sequence. After failing to convert on fourth down at the goal line, the Rams gave possession to the Yellow Jackets in their own end zone. Waynesburg failed to gain a first down, a problem for the team all game, and kicked away to Fordham.

The punt was short, however, and the three-headed running attack of Kazlo, Eshmont and Ralph Friedgen, FU ’40, got the Rams back to the two-yard line before the end of the quarter. Friedgen cashed in from there, becoming the third Fordham back to score in the 21-7 game.

The second half is of little note, as the Yellow Jackets sputtered while the Rams continued to score. In the third quarter, fullback Dominic Principe, FU ’41, notched yet another rushing touchdown for the Rams from four yards out, and Friedgen scored again in the closing minutes of the fourth. The final extra point was no good, but the result was never in question as Fordham cruised to a 34-7 victory.

It was an investment for the future of television and the potential market for sports within the medium.

In a game that was very different from the ones played today, quarterback and team captain William Krywicki, FU ’40, was praised more for his blocking than passing. The team only made five pass attempts, some of which were thrown by backs and not by Krywicki. Two were completed for 64 yards, and two were intercepted.

Fordham backs combined for 337 yards on the ground while Waynesburg only managed 157, even with Brooks’ 63-yard scamper early on. The Yellow Jackets collected five first downs throughout the entire game and lost three fumbles. Despite losing, Brooks was the one who received the most applause after the game, as many considered Fordham’s performance a disappointment.

While the game is remembered today as the first televised college football game, very few people considered it the focal point of the event. Stern, who typically embellished plays for his calls on radio, found the visual element limiting, and NBC almost certainly spent more than they made back on the single broadcast. However, it was an investment for the future of television and the potential market for sports within the medium.

Some of the finest football players in Fordham’s history were changing the world.

Fordham went on to lose its next two games to Alabama and Tulane but finished the season with a 6-2 record and earned the 15th ranking in the Associated Press poll at the end of the year. The Rams earned a berth in the Cotton Bowl the following season but lost 13-12 to Texas A&M University. After that, nearly every member of the team fought in World War II, and some went on to pursue careers in professional football.

The years wore on, and Fordham’s football program suffered while Waynesburg eventually accepted its status as a Division III school. Nearly every player on the field that day has since passed away. Randall’s Island Stadium became Triborough Stadium and then Downing Stadium before it was eventually torn down and replaced by Icahn Stadium. The footage broadcast that day was not recorded and has not been seen since. It seems like the only thing that lives on from that day is the company that captured the action.

After years of refinement, NBC’s costly stunt in 1939 evolved into a billion-dollar industry, and sports television has become a societal constant even as star players and teams fade away and grow anew. Though they didn’t know it at the time, some of the finest football players in Fordham’s history were changing the world. 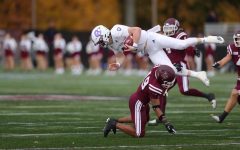 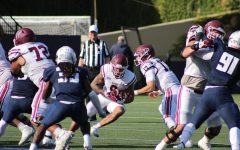 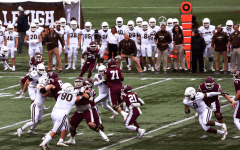 Their thoughts in 1939 didn’t extend far beyond a game against the Crimson Tide the following week, but with the help of a revolutionary broadcasting company in the heart of a city on the cutting edge, the Rams did their part in furthering one of the most important technologies known to the contemporary world. 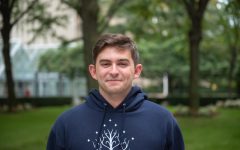 Patrick Moquin, FCLC ’22, is majoring in journalism and oversees Fordham sports coverage for The Observer. He played baseball in high school and also follows horse racing and motorsports, though he’s allergic to horses and doesn’t have a driver’s license. He most thoroughly enjoys his time at The Observer when he’s working with other editors and writers.