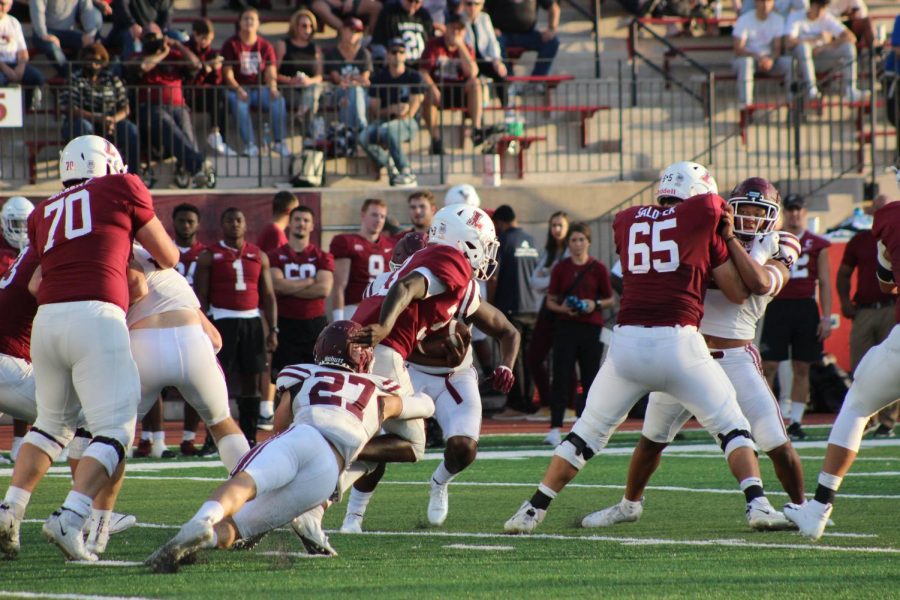 The Fordham football team defeated the Lafayette College (LC) Leopards, 42-41, in a tumultuous back-and-forth barn burner on Saturday, Oct. 2. The Patriot League debut for both squads did not disappoint fans, as the rivals scored a combined 83 points. The Rams move to 2-3 on the season, claiming their second consecutive win and first conference victory of the year.

The scoring started early in Easton, Pennsylvania, as the Rams’ opening drive took just 1:23. In four plays, Fordham traveled 73 yards, with Trey Sneed, Fordham College at Rose Hill (FCRH) ’22, finding the endzone on the final play of the drive for his first touchdown of the season. Sneed, named a captain for the 2021 season, made a tremendous difference for the Rams’ offense in his first game of the year.

After forcing a three-and-out, Fordham got the ball back and drove down the field again. On a handoff, Trey Wilson III, Gabelli School of Business at Rose Hill (GSBRH) ’23, evaded a tackle before finding open space on the way to a 23-yard touchdown. With 8:52 remaining in the first quarter, the Rams already held a 14-0 lead.

The Lafayette defense failed to slow down Tim DeMorat, FCRH ’22, and the Fordham offense on the subsequent drive.

The Lafayette defense failed to slow down Tim DeMorat, FCRH ’22, and the Fordham offense on the subsequent drive. A 36-yard completion to Hamze El-Zayat, FCRH ’22, to convert on third down led to a 14-yard touchdown pass from DeMorat to Garrett Cody, FCRH ’23. Going into the second quarter, the Rams led 21-7.

Lafayette seemed to figure out Fordham’s high-powered offense in the second quarter. The Rams started it off with a three-and-out, which the Leopards took advantage of by punching in a one-yard rushing touchdown to bring the game within a score.

The next Fordham possession was also fruitless, and again Lafayette responded with a touchdown. This time, Davis picked apart the Fordham secondary, completing five of six passes for 79 yards before fullback Ty Hranicka, LC ’22, muscled into the endzone for a one-yard score. The teams entered halftime deadlocked at 21.

The Leopards started the second half with the ball, and, during the kickoff, the Patriot League’s reigning Defensive Player of the Year Ryan Greenhagen, GSBRH ’22, suffered an injury that kept him out for the remainder of the game. Lafayette almost immediately took advantage of Greenhagen’s absence, and on the second play of the half, Davis connected with K.J. Rodgers, LC ’23, for a 74-yard touchdown.

On Fordham’s next drive, the offense failed to score, but a phenomenal punt by John O’Friel, FCRH ’23, pinned Lafayette on its own one-yard line. Upon further review, when Jesse Bramble, FCRH ’22, caught the punt to keep it out of the endzone, replay showed that his foot was on the goal line. This should have resulted in the Leopards receiving the ball at their own 20-yard line, but the officials missed the call and the Lafayette offense started its possession under unfavorable conditions.

After both squads struggled on their following possessions, Lafayette received the ball on its own seven-yard line.

The missed call would come back to haunt Lafayette, as the Fordham defense stepped up and caused a safety by sacking Davis in the endzone. Fotis Kokosioulis, FCRH ’22, then returned the post-safety kickoff for 45 yards before Nick Leinenweber, FCRH ’22, knocked in a 39-yard field goal to cut the Lafayette lead to just two points.

After both squads struggled on their following possessions, Lafayette received the ball on its own seven-yard line. The Leopards’ offense marched down the field, gaining seven first downs and 93 yards on just nine plays, culminating in Davis’ four-yard rushing touchdown to give Lafayette a 35-26 edge.

Fordham followed Lafayette’s lead on its next drive. Facing a nine-point deficit, the Rams’ offense turned to the rushing game. Fordham ran the ball nine consecutive times for 67 yards. The final run of the drive was a one-yard rush by Sneed for his second touchdown of the contest.

After Fordham forced a three-and-out for Lafayette, the Rams received the ball while trailing by just two points. A 33-yard run by Sneed got the Rams into field goal range, and Leinenweber nailed a 19-yard attempt to give Fordham a 36-35 lead with 7:32 remaining in the game.

Lafayette was determined to keep things interesting. Facing third down and seven, Davis connected with Joe Gillette, LC ’23, for a 16-yard gain. A few plays later, Davis threw a deep pass that fell incomplete on third down and one, but a defensive pass interference call kept Lafayette’s hopes alive.

Following a sack by Bramble, the Leopards were up against the ropes. For Lafayette to have any hope of winning the game, Davis and the offense needed to convert on third down and 20. The first-year quarterback stepped back and fired a 23-yard rocket to Young, converting the third down and continuing the Leopards’ march down the field. Davis would finish the game with 354 yards, two touchdown passes and a rushing touchdown.

The drive concluded with a one-yard rushing score by Michael Hayes, LC ’25, to give Lafayette a 41-36 lead. The Leopards left just 1:40 on the clock for DeMorat and the Rams’ offense to respond.

Fordham moved quickly and precisely. Four completions from DeMorat moved the Rams from their own 28-yard line to Lafayette’s 34-yard line before he handed the ball off to Sneed. The captain running back broke off an 18-yard rush to move the Rams into the redzone.

A 14-yard bullet to M.J. Wright, GSBRH ’23, got Fordham to Lafayette’s two-yard line before DeMorat decided to handle business himself, rushing for two yards into the endzone to give the Rams a 42-41 lead. The drive took only 1:12 and left 28 seconds for the Leopards to muster a comeback. 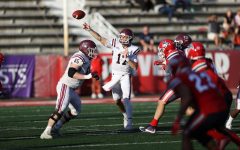 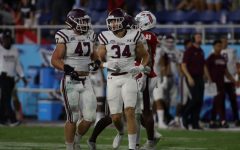 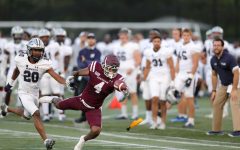 Davis and the Lafayette offense repeatedly attempted to connect on deep passes, but each time they were denied by the Fordham defense. On Lafayette’s final play of regulation, Fordham inexplicably had 12 defenders on the field. This meant that Lafayette would get one final untimed try to find the endzone. Davis’ throw sailed through the air, but was ultimately batted down by Fordham’s defense, securing a Fordham victory.

The nail-biting win marks a triumphant beginning to Fordham’s Patriot League play. While there is plenty to celebrate following such a clutch performance, the victory is undoubtedly subdued as the team and fans await any news regarding the health status of Greenhagen. Fordham will look to carry its momentum into its next contest, a homecoming weekend meeting against Wagner College on Saturday, Oct. 9.