On a playlist with: Scarlxrd, City Morgue and Korn

The deets: If you hated the nu metal trend of the 2000s (see also: Limp Bizkit), avert your ears, because you are going to loathe Bone Crew. Conversely, if you didn’t mind hearing Evanescence’s timeless “Bring Me to Life” everywhere you went in 2003, then you just might love this EP (and have something in common with me).

This “trap metal” duo is the brainchild of Fronzilla, the critically acclaimed frontman of Atlanta-based metalcore band Attila, and DaBoiJ, a practically unknown rapper from Detroit. As Fronzilla tells the story, the two met at the Detroit date of Warped Tour 2014. How much more apt could a trap metal rendezvous get than Warped Tour, the only traveling festival with designated stages for both hip-hop and metal?

When these two worlds collide, it is … surprisingly fitting. While the metalcore roots of Attila and the hip-hop vibes of DaBoiJ might not have much in common, the two don’t sound entirely abrasive when combined. The sound leans more heavily on hip-hop than metal, in that the structure of the songs is more typical of rap, and both vocalists deliver their flows like rappers do (even when screamed). But the elements of hardcore that tinge these five tracks don’t sound out of place at all; the low-tuned, distorted guitars and screamed vocals blend in quite nicely.

The best example of this amalgam is on “Real Ones,” which begins with a hi-hat beat indicative of a trap song but quickly adds the low-tuned distortion guitar that deathcore music epitomizes. Then, about halfway through the track, Fronzilla begins screaming with an impressively fast and coherent flow for a harsh vocalist.

However, something must be said about how boring Bone Crew’s bars are. Both DaBoiJ and Fronzilla fall utterly flat in their lyrical prowess. DaBoiJ’s lines lack cleverness virtually the entire time, which he could’ve made up for by complicating his flow, but his normal pace feels like that of spoken word, and he rarely kicks it up a notch. Meanwhile, Fronzilla has not developed his writing skills enough, either, relying too heavily on his complex flows and well-executed growls. And this is the thing that drags down the quality of this otherwise solid record.

I know that trap artists screaming is not a new concept. Rapper Scarlxrd, who grew up listening to metal, has been doing this for three years now, and City Morgue is a trap metal-esque crew that’s already popular on WORLDSTAR. Even Brooklyn’s own 6ix9ine, a recent rap phenomenon, screams in his music sometimes. But the unabashed elements of hardcore music on this Bone Crew EP are new, and they fit well, despite the underwhelming nature of the record’s lyrical content.

The bottom line: Bone Crew just might have scratched the right itch with this “trap metal” EP. With some lessons in lyricism and a good marketing team, this duo could jumpstart a nu metal-like resurgence of rock music.

The peaks: “Welcome to the Bone Crew,” “Back It Up”

On a playlist with: The Weeknd, Beyoncé and Taylor Swift

The deets: Ariana Grande is one of the most easily recognizable voices in music today, and for good reason: she is immensely talented and has a distinct brand image. She has transformed herself from a supporting actor on a Nickelodeon show (“Victorious”) into an undeniable megaforce in the music industry, and she knows it.

Grande’s confidence on “Sweetener” shines particularly on the tracks “successful” and “God is a woman.” On the former, she plays on the classic trope of a man coming home to his wife to talk about work; here, she is coming home to a man to tell him about her day. On the latter, which was a single for the LP, she asserts that her lover will be so impressed by her abilities in the boudoir that he will suddenly become spiritually awakened: implicitly, believing she is God.

The instrumentation on the album is mostly pop, but there are tasteful tinges of R&B throughout. The best example of this is “blazed,” on which noted hip-hop and R&B artist Pharrell Williams wrote, produced and features. The song is mellow yet danceable, which is a positive trait that many R&B records have. But, unfortunately, “sweetener” actually struggles to achieve this on most of its other cuts.

Many of the tracks on this album are too slow and laid-back to be fun, a characteristic I expect of pop music: “goodnight n go,” “R.E.M” and “successful” all disappoint in their lack of proverbial punch. Their weak production and leisurely paces make them hard to enjoy, and there are enough of these songs on this 15-track album that it sometimes becomes a drag to listen to.

Grande is at her best when her beats are enjoyable and the production is good, which is why “no tears left to cry” it is distinctly the standout song on the album. The track is fast-paced, the melody is catchy and it goes without saying that the vocals are outstanding: the perfect storm for the young superstar. “God is a woman” stands out for the exact same reason.

It would be criminal not to mention Grande’s dedication to making impassioned social and political statements via her massive platform, be they subtle or overt. On “the light is coming,” there is a sample of a 2009 public meeting about healthcare during which a citizen yells that a Senator “wouldn’t let anybody speak.” This outburst is played on a loop throughout the song, adding low-key social and metaphorical commentary about light overcoming darkness in a political context. Meanwhile, she said on Twitter that the song “successful” is about women celebrating each other, adding a message of feminism to the record. The most powerful moment comes on “get well soon,” though. This cut is about overcoming anxiety and other mental health issues in general, but Grande said that it is also about the months following the bombing at her Manchester, U.K., concert and how hard they were for her mentally. After the last notes of the song ring out, there are 40 seconds of silence dedicated to the victims of the bombing, bringing the track’s length to 5:22, which is, poignantly, the date of the bombing.

The bottom line: “Sweetener” is not strong in production or entertainment value, but it is stronger than ever in passion and vocal ability. Grande must include more interesting dance-pop jams on her next album for it to hold up in the oversaturated pop market, but this is certainly a step up from her previous works.

The peaks: “no tears left to cry,” “God is a woman,” “blazed (feat. Pharrell Williams)”

The deets: At 45 years old, which is technically middle aged, Eminem has finally returned to vintage form on “Kamikaze” — I daresay the real Slim Shady has returned. However, the question remains: is this a good thing?

After the release of 2017’s “Revival,” feedback on the album was largely negative. Critics suggested that Eminem had lost his aggressive luster, failed at attempting trap-style triplet flows and made it clear that he was reaching to maintain relevance. I was not one of these critics, as I liked “Revival” more than most people did. I found his staunch anti-Trump stance compelling and I still enjoy hearing how fast and clever he is today, even well into his 40s.

On Kamikaze, Em takes direct aim at those very same critics, addressing almost every one of the individual criticisms of “Revival.” That lost aggression came back, as he name-drops several rappers in biting insults — members of his hit list include Lil Yachty, Lil Xan, Lil Pump, Drake, Machine Gun Kelly and Tyler, the Creator. Adding to the punch of this album is the fact that there isn’t a single ballad on the album.

All 13 tracks on this album are unapologetic and powerful, with great production from young producers like Mike Will Made It and Ronny J. I particularly enjoyed the strength of “Lucky You,” which features young rapper Joyner Lucas. Lucas notably rose to fame on social media and YouTube with his song “I’m Not Racist,” a track that deals with issues of race and politics in modern America. Em’s inclusion of Lucas and young producers on “Kamikaze” shows that, even at 45, he is willing to praise and collaborate with artists younger than he is. The beat on this track is incredibly fun, Lucas’s verses showcase his rhythmic prowess, and Eminem’s long stanza proves that he is still sharp in his flow and attacks. He even calls out rappers who don’t write their own songs, likely referencing the recent Drake ghostwriting controversy.

He addresses the trap flow issue on “The Ringer,” though a bit hypocritically. On this cut, he raps ironically in trap-style triplets, saying, “Do you have any idea how much I hate this choppy flow everyone copies though? Probably no / Get this f–kin’ audio out my Audio, yo, adiós.” It doesn’t make much sense that he claims to hate choppy trap flows when he attempted them on 2017’s “Believe” and “Chloraseptic.” But he might be inadvertently admitting it was a mistake on this line in “The Ringer,” so I’ll give him a pass on that for now.

What I cannot excuse, however, is Eminem’s continued use of the homophobic f-slur. While the ninth track, “Fall,” is one of the best on the album, he hurls the tone-deaf insult when dissing Tyler, the Creator. Even on the explicit version of the track, the word is censored, showing he understands the gravity and implications of the word’s use, yet he uses it anyway. Here, it is clear that Em is striving to maintain relevance in a trite and tired way. But while it is unfortunate that the he had to spoil his most interesting release in a long time with a major hindrance like a homophobic slur, it is not surprising. He has used it on almost every album of his career, and many rappers still use it today, including Tyler, the Creator. I can only hope that hip-hop as a genre can move past this childish and offensive attitude soon.

Eminem’s age does make him seem a bit out of touch on this album, but it is clear that he is trying to freshen up his style with his use of young producers and young featured artists. Ultimately, this album sounds much better than his two previous albums, and it is an effective mix of new sound and classic Shady attitude.

The bottom line: “Kamikaze” is a return to form for Eminem: it is his best album in at least a decade, and the first on which he effectively embraces newer trends and younger collaborators in hip-hop. Once he moves past tired homophobic insults and makes up his mind about whether or not he espouses trap influence, he might be able to bang out one or two more quality releases before he inevitably retires from the game. 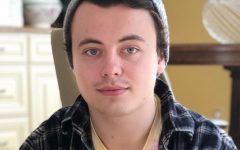 Jordan Meltzer, Gabelli School of Business ’20, is a news editor emeritus for The Observer. A global business major concentrating in communication and media management, Jordan has written for all five sections of The Observer, but his dedication is to the news section. Topics of particular interest to Jordan are politics, music and the many goings-on at Fordham Lincoln Center. Jordan is also a Yankees fan and advocates for the universalization of the designated hitter.