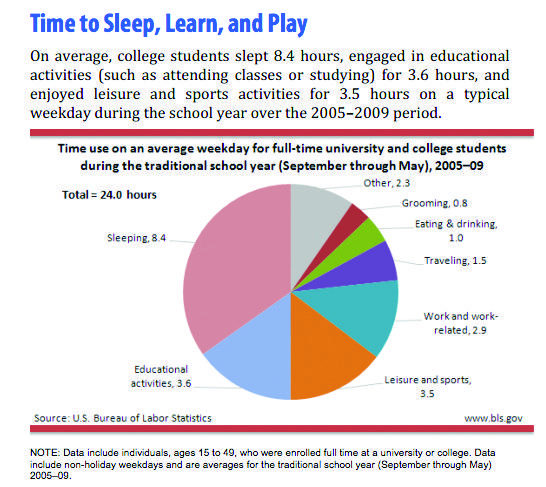 If one applies the “Quiet Hours” policy in the McMahon dorms, students should sleep from 11:30 p.m. to 8 a.m. This appears to be Fordham’s ideal sleeping schedule: eight hours and a half of quiet and nourishing sleep. But when walking in the corridors of McMahon after midnight, it is common to hear the subtle sound of video games, laughter and loud hip-hop. With all the noise and activity, one wonders how much students really sleep.

According to a Bureau of Labor Statistics (BLS) study, part of the American Time Use Survey, students do sleep for more than 8 hours per night during weekdays. The BLS asked more than 50,000 persons aged 15 and over about their daily activities and the time they dedicate to them.

This way, they were able to determine that the average student in the United States sleeps for 8.4 hours each day. Put into perspective, an 8.4 hours of sleep average represents more than a third of a day. Arthur Esteves-Ferreira, Fordham College at Lincoln Center (FCLC) ’14, said, “I do not think I know anyone who sleeps that much.”

Unlike most people, Courtney Cambria, FCLC ’15, said, “I sleep for eight to nine hours each night but my roommates go to sleep at 3 a.m. and wake up at 9 a.m.” While some people sleep for the recommended amount of time, the BLS study points out a general average of 8.4 hours, meaning that for every student sleeping for 6 hours, there is another one that sleeps more than 10 hours.

A bizarre detail of the BLS study is the student’s age bracket. Certainly a 15 year old and a 49 year old will not dedicate the same amount of time to sleep. Elizabeth Ryder, FCLC ’14, said, “People of older age often have other responsibilities,” including taking care of children, which “changes the way they manage time.”

Kelsey Garcia, FCLC ’12 and resident advisor at McMahon Hall, agreed: “This could be very stereotypical, but I think that [older students] want to sleep more than someone who goes out and wastes his time.”

Another way of putting up with lack of sleep is napping, which students do not always include in their sleeping hours. Molly Spater, FCLC ’15 said, “I take naps sometimes, especially when [I have classes] from 10 a.m. to 4 p.m. or when I go to the gym.” Garcia added, “I know people who sleep for like five hours at night and then go nap for an hour.” It is common to see people sleep in the library or in the lounges.

Most people agree that the BLS study does not reflect their sleeping habits, nor their friends’. The 15-49 age bracket troubles a lot of students: “How is it possible to compare 49-year-old students with 15 year olds?” wonders Eric Pang, FCLC ’15. Despite these confusions, almost everyone agrees that students need to sleep more.

With midterms drawing near, let’s hope everyone gets the most sleep they can before lowering the national average again.