Freshman Year is Not Always Easy to Stomach 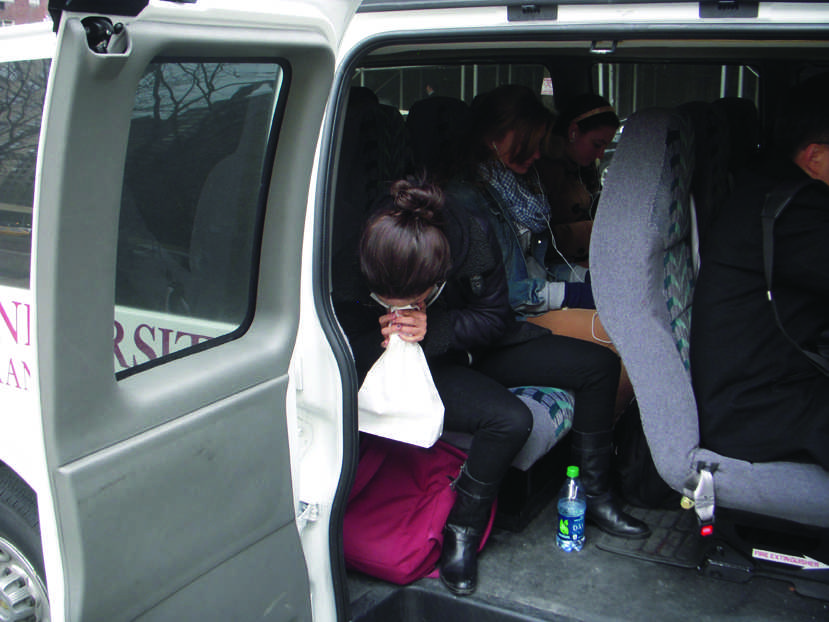 Throwing up into a bag on the Ram Van is a nightmare, but imagine if you did not have a bag. (Photo Illustration by Harry Huggins/The Observer)

I threw up on the Ram Van. I will come right out and say that because I just finished being a first semester freshman, and that’s what happens first semester freshman year. You move to a new city. All your friends are hundreds of miles away, buying different textbooks and wearing different college sweatshirts and mobile uploading different pictures of themselves playing beer pong. You’re alone in a place where no one will cook you macaroni and cheese. It’s new, it’s exhilarating, it’s intimidating, and sometimes you throw up. On the Ram Van.

And, sometimes you accidentally go to Brooklyn by yourself. I did. In fact, I had my first Brooklyn experience and my first Ram Van vomit experience on the very same Friday afternoon last September, back when I was living at Rose Hill.

Though I had just arrived at school, I already thought of myself as a true New Yorker, a qualification I based primarily on nothing. But despite the fact that I had no mental map of Manhattan whatsoever, I managed to get on the D train and make it to the Village to take a dance class on that ill-omened Friday. And I would have made it back to campus, too, if the campus had been in Brooklyn. But I was not so lucky.

My outbound voyage had consisted of boarding the train at Fordham Road and, after several stops, exiting the train at West 4th. Based on that success, I convinced myself that I, Lord of the Subway, knew what I was doing.  I could almost hear the chorus of “Empire State of Mind” rise up behind me as I left the dance studio after class and boarded the D to get back home.

Thanks to my nonchalant New Yorker attitude, I only started sweating semi-profusely when I realized that the train had stopped at ten consecutive stations that I didn’t recognize. I noticed that it was getting dark outside. My panic mounted as the train continued and eventually, I was left alone in the car with a woman who was singing aloud to her iPod and sporting what is commonly known as a “tramp stamp,” as well as what is commonly known as a “giant face tattoo.”

It took me around 30 adrenaline-charged minutes to realize that I was, as a savvy city-goer might say, nowhere near Manhattan. I abandoned ship at the first possible opportunity and, by some subway miracle, boarded another train in the uptown direction. As soon as it hit 59th Street, I rushed out into the evening crowd with my hair mussed, my bag open and my eyes darting back and forth in panic. I pushed past businesspeople in suits and camera-toting tourists who stared while I ran, foaming at the mouth, toward the safety of Lincoln Center.

It was 9 p.m. and I was finally at Fordham. I hung my head and pushed past the front doors of Lowenstein to buy my Ram Van ticket to Rose Hill. I had been trampled. I had been humbled. I had been hazed by the city of New York. I could finally sit down in the van and laughed at my Brooklyn-induced misery.

That’s when I started feeling nauseous.

You already know what happened next. I took a deep breath and tried to steady my stomach as every surreal scrap of that nightmarish day came rushing back: the disgusting salad I had eaten alone on Christopher Street; the kindly, foreign food cart vendor who had charmed me into buying a giant waffle; the broken boards and flickering lightbulbs of the 62nd Street/New Utrecht Avenue station, my full-out sprint in the rain from Columbus Circle to Fordham. I couldn’t hold it all down. My valiant struggle ended with a pathetic,“I think I have food poisoning,” muttered to the girl sitting to my left in the front row of the packed van. Soon I was back in the Bronx holding a shopping bag full of all the contents of my stomach and a majority of my dignity.

The fateful day had finally ended, and now the fateful first semester has ended, too. These days, I have a better handle on the city. But I’m ready to accept that some of the trips I take over the next four years might turn out to be the confusing, fear-inducing and sometimes sticky experiences that I got used to first semester. Freshmen know what I’m talking about: even though we’re busy embarking on the next leg of our journey into the real world, we’re really just brand new adults in the middle of a big city, and we might still throw up sometimes.  It’ll be just another inevitable part of these exciting four years. My best advice is to be ready with a bag.