Waiters, Just Pass the Check, Don’t Indulge on the Conversation 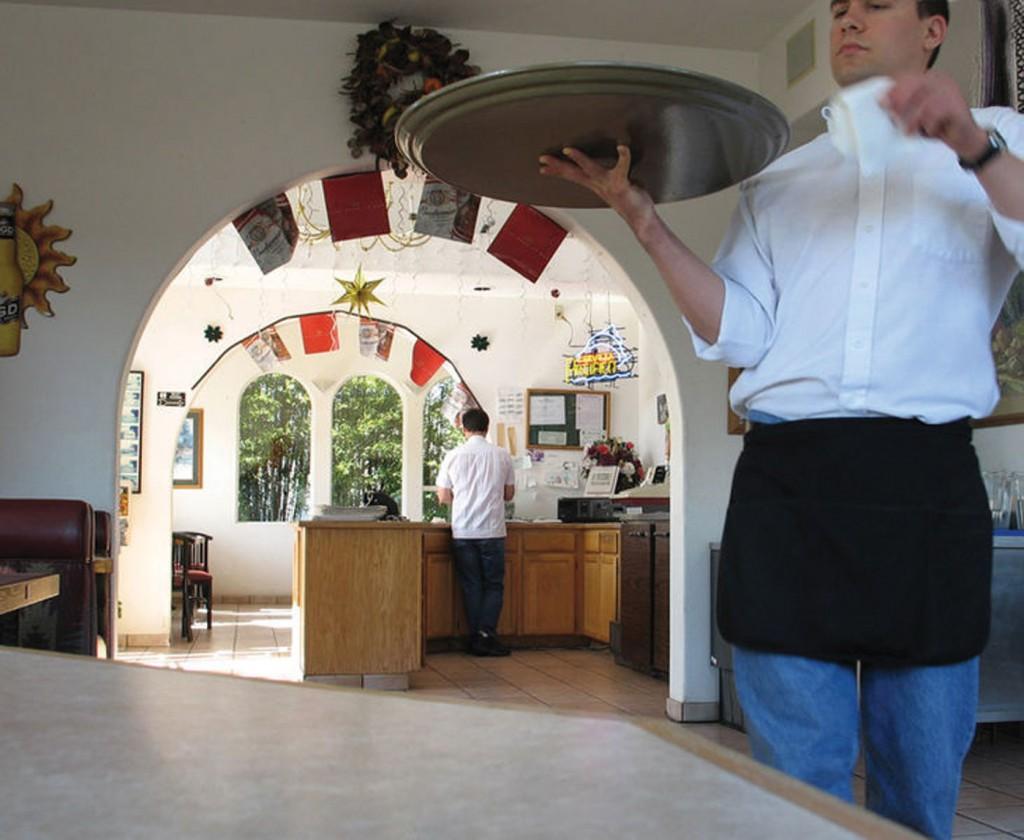 It’s okay to be friendly, but it’s not okay for waiters to talk so much that you find you know their life story by the end of the meal. (Bob Doran/ Wikimedia Commons)

Lately, I’ve noticed many waiters seem to take liberties with their job. They do whatever they please, trampling over the sanctity of a proper meal. I once enjoyed dining out, but now I feel most of the meal is spent deflecting the attacks of these militant waiters rather than enjoying the food.

“How is everything?” Those words sound like a death knell over what usually is a pleasurable dining experience. I’ll oblige the waiter and say, “It’s good,” or sometimes I’ll joke, “It’s terrible,” in a manner so exaggerated that the insincerity of my response cannot be mistaken. I accept this insufferable question as part of modern dining, but some waiters don’t stop there. They interrogate to no end. “How’s the drink—the appetizer—the main course—the dessert?” They demand a bite-by-bite commentary, an analysis of every flavor, sensation, etc.

Sometimes, as if seized by a fit of madness, waiters will begin to converse with me about matters outside the realm of cuisine. Listen, if I am out dining with family and/or friends, their company is the only one I want to enjoy. Some waiters will drop eaves without scruple and preface their intrusions into conversations with “I couldn’t help but overhear” and then they add their two cents. When this happens, I go limp with terror.

The waiter treads along the perimeter of the restaurant and every time he or she approaches I get a feeling in the pit of my stomach that usually accompanies descents from great heights. Once I was dining out and my waiter couldn’t refrain from butting into my conversation. Let me tell you, he had quite a mouth on him. Every time he’d approach, we’d bring our conversation to a murmur, hoping to avoid his commentary. We were like little critters crawling across an open plain in an attempt to avoid the talons of a hawk.

Though they share many characteristics, there is a distinction between the eavesdropping waiter and this class of waiter who is garrulous to a fault. They tell you about their job or reveal future ambitions. The topic of conversation matters not for they talk only for talking’s sake. I had one waiter who became so forcefully intimate with my dining party that I actually scooted over thinking he was going to sit down and join us. At one point in the meal, I was genuinely concerned that he was going to introduce me to his parents.

Directly across from my table, there was a group of girls. I saw that he harassed them, too. He’d encroach upon them with a lascivious smile, like a sultan retiring to his harem after a day of governance. His villainy extended beyond just profuse babbling, for every single action that he performed had to be accompanied by a preamble and an epilogue. My friends and I asked for separate checks. Before doing this, he had to explore every possibility regarding the nature of our request, and then when he finally returned with the separate checks, he had to hold a ceremony marking the triumph of his service before he’d relinquish the checks. “Aren’t I nice?” he cooed.

Then, there are the snobbish waiters, straight in posture and dripping with condescension. If you order anything that is cheap, they glare at you like you’re a common thief. For the duration of the meal, their eyes are fixed on you, their disgust apparent and they eye you like prison wardens as though you were going to dash for the door at any moment. They even scrutinize all your decisions. “Our customers usually do this.” “An unusual choice, monsieur.” “That wine is usually paired with this.” By meal’s end, after so much browbeating, I’ve practically developed an inferiority complex.

While this is not a specific genus of waiter, it is a practice that many partake in. They’ll ask if you want the dessert and if you say yes, their eyes widen with glee. Eating a piece of cake is not a momentous occasion requiring fanfare. “Are we going to indulge tonight?” the waiter asks with a smirk of complicity. I swear they almost adopt that horrible baby talk voice. “I’ll have the crème brûlée.” “Oh yes, yes you will, that’s a goody goody.” It gets to the point where I recoil as the waiter comes near, thinking he or she will pinch my cheeks or pet my head.

Do not take friendliness and spontaneity for anything but the machinations of a goon-thug, which have been long in ferment. Forget lobster bisque; be lobster brusque. Maybe I’m being a bit hawkish, but these renegade waiters are a threat and we must rise to meet this menace. However, it may be that those who can profit most from this testimony might be waiters themselves, who may unknowingly be engaging in hostile service.