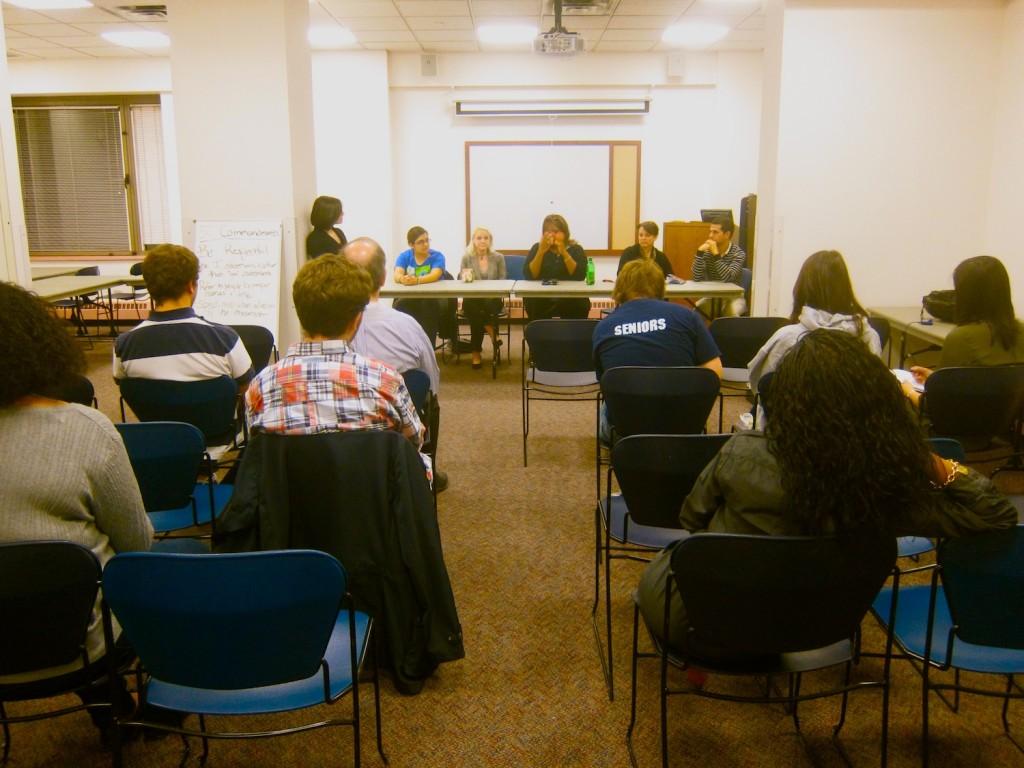 RHA and Res Life had a panel discussion with students about the policies in McMahon Hall. (Kyle Morrison/The Observer)

Miscommunication between the Office of Residential Life (Res Life) and residents of McMahon Hall led the Residence Hall Association (RHA) to facilitate its second part of their town hall discussion on Nov. 7. The meeting regarded Fordham College at Lincoln Center (FCLC)’s McMahon Hall rules and regulations. The meeting was reserved for students to express their frustrations, and staff members from Res Life were also present for a panel discussion.

Jenifer Campbell, director of the Office of Residential Life (Res Life), Leslie Timoney, facilities manager of McMahon Hall and Resident Director Dennis Velez attended the meeting to clarify and share their perspective on student concerns. The discussion honed in on the main concerns students have, including the 24-hour guest pass policy, better ways of communicating, especially after anti-Res Life flyers were posted a month ago. The meeting also briefly discussed improvements with the laundry room, gym and eighth floor lounge in McMahon Hall.

Michelle Panzironi, FCLC ’12 and vice president of RHA, said that the town hall meetings were RHA’s answer to the removal of guest passes the weekend of Sept. 17-18. The revoked privilege was Campbell’s decision when anonymous flyers posted on the walls of McMahon Hall on Sept. 16 were discovered.

“There’s something wrong with the way that the residents and Res Life are communicating and the anti-Res Life posters are proof of that,” Panzironi said. She said that she hopes a candid dialogue can facilitate change in the respect that Res Life shows to the students and vice versa so that McMahon Hall can improve.

Communication was a key point echoed throughout the meeting. Ryan O’Toole, FCLC ’12 and president of United Student Government (USG), said that it is important for Res Life to tell people their side of the story whenever they make a decision, like revoking guest pass policies.

“If students hear from a friend, then they will think it is Res Life just trying to punish people,” O’Toole said.

Rebecca Decker, FCLC ’12 and president of RHA, said that getting the real story from Res Life is better than hearing a fabricated version from one student to another. “I wish there was more communication like a poster detailing with why visitation rights were taken away. The lack of understanding where this is coming from, or hearing about it directly from Res Life caused frustration,” Decker said.

Campbell said, “In my five years, I have never dealt with flyers like this before.” She said that Res Life will “definitely take communication into consideration next time, but sometimes we have to make these decisions because it is my job to maintain the safety of this building.”

Since the flyer incident, Campbell said that a group of students were held responsible, but due to confidential reasons, she cannot reveal how the individuals involved were disciplined. The group was caught after a montage of elevator security camera stills was collected. “We noticed that there were folks that were visitors in the building that were a part of this group,” Campbell said.

Jeffrey Cipriano, FCLC ’14, said, “[Campbell] revoked guest passes as a disciplinary reaction. It was good for protecting our residents, but as a way to deal with social problems within this building, I don’t think it was the best avenue of action.”

Cipriano said he knows that she is in a complicated position. “It’s a really tough job to be in charge of a thousand people.” He said that since she has never been in a situation like that before, “she’s been faulted at what is a very basic reaction, and that is to remove all guest passes.”

Campbell said that if a similar situation were to happen again, there would potentially be an email blast to the student body. Res Life will also communicate through their Facebook page and Twitter account.

In addition to having better communication, the town hall discussed giving commuters leeway to the 24-hour guest policy. Currently, all visitors, including commuters from FCLC, must ask a resident to get an overnight pass 24-hours in advance.

Campbell explained that if this policy were to change, it would be a collective change with the Rose Hill campus. The United Student Government, Commuter Students Association and RHA counterparts from both campuses are currently creating a formalized proposal that will be given to the university administration this month.

Panzironi said, “Commuters are basically treated like a visitor outside of the university and it doesn’t give them a chance to hang around the dorms.”

Campell said that any visitor can stay nine times a month at the dorms, but some visitors have found loopholes through the system. “We have been able to address some of the issues with the system, but I have put a proposal for a new system that would track this activity.” She said that this new system would ideally also help with getting overnight passes so student would not have to go to the Resident Assistant (RA) office.

Ojala Naeem, FCLC ’12 and RA, said that Res Life and RAs are here to help, but she feels like not many people approach them. “Res Life’s main goal is to maintain everyone’s safety. If students have any questions, approach us,” Naeem said.

Campbell concluded the town hall meeting by recommending students to check the handbook guide that is online if they have any questions. “The handbook is the biggest resource and the most updated. Whenever there is a change or a nuance, it is all provided online.”