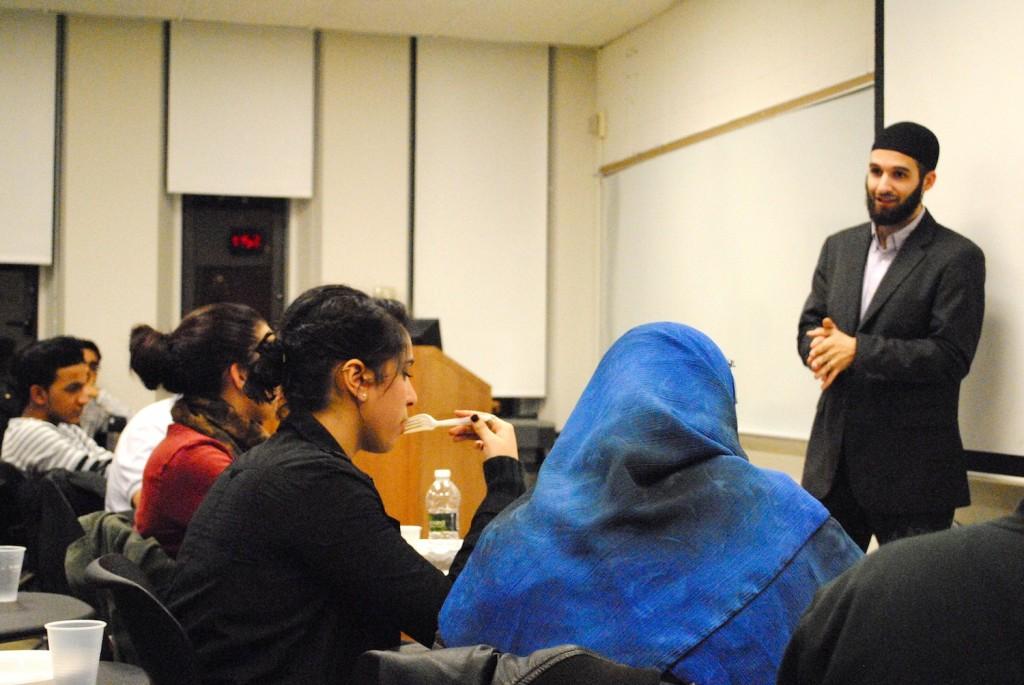 Cyrus McGoldrick converted from Christianity to Islam and spoke to students about his experience. (Kyle Morrison/The Observer)

On Nov. 11, the Muslim Students’ Association (MSA) invited Cyrus McGoldrick to speak about his experience converting from Christianity to Islam. MSA’s “Islam from the Eyes of a Convert” allowed students to ask McGoldrick about his work as civil rights manager for the Council on American-Islamic Relations (CAIR) and how he is working to address discrimination against Muslims in New York City.

The son of an Irish father and an Iranian mother, McGoldrick grew up in a family whose religious beliefs ranged from Shi’a Islam to the Bahá’i Faith.  As a student at Columbia University, he said that he came to intellectually appreciate Islam through studying Sufi poetry before actually converting.

McGoldrick said that before he even believed in God, “I came to an understanding that Islam, as a system of life—even if you take God out of it—was the most natural and complete system for human living.”

He also stressed the gradual nature of his conversion and said that it was a process.  “I didn’t just wake up one day and start praying five times a day,” he said. McGoldrick said that Islam is a religion of converts.  “Even if you’re born Muslim, you still need to come to a spiritual understanding of the reasoning behind it,” he said.

In addition to sharing his conversion experience, McGoldrick also talked about his involvement with CAIR. He said that most of CAIR’s efforts go towards protecting civil liberties for Muslims.

“The Constitution is supposed to protect everyone equally, but that is not always the case,” he said. He said that CAIR’s mission is to build communities, voice policy issues in the media and to end religious discrimination.

At one point, McGoldrick handed out a list compiled by the Demographics Unit entitled “Ancestries of Interest,” which ranks national origins according to the threat level each nationality poses.

Ayah Ahamed, FCLC ’14 and treasurer of MSA, is of Egyptian descent, and voiced her “surprise” at seeing her nationality at the top of the list.  “To see ‘Egyptian’ on the top of the list, shocked me.  It definitely made me want to get more involved with CAIR.”

As a case in point, McGoldrick talked about the effects of the September 11 attacks on NYPD procedures in handling the “Ancestries of Interest.” Citing a 2007 NYPD report entitled “Radicalization in the West,” McGoldrick summarized the criteria used by officers to identify potential threats to national security.  These criteria include regularly visiting a mosque, frequenting bookstores, quitting smoking and growing a beard.

“If this hasn’t happened to you,” McGoldrick said, “don’t think it’s not a common occurrence.”

McGoldrick urged Muslim students to speak up about this.  “I didn’t come here to scare you,” he said.  “The complete opposite of what I want to tell you is to not be involved.  That’s what they want to happen.  They want you to stay at home, they don’t want you to get out in public.  The more outspoken you are, the harder it is for them to come and get you.”

In spite of the challenges that lay ahead for Muslim-American relations, Nusrat Jahan, FCLC ’13 and president of MSA, said that she was pleased with McGoldrick, and expressed her hope that MSA events will allow students to better address the problems of discrimination against Muslims.  “Hearing from someone in his position gives a good idea of what Islam is all about,” she said.  “We’re not terrorists.”

McGoldrick concluded the discussion with a brief account of his own conversion to Islam, framing his story around a quote from the Quran, Surat Al-Baqarah, 2:256: “There shall be no compulsion in religion.”