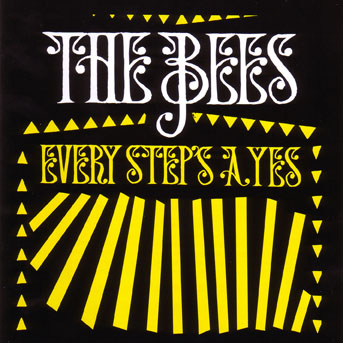 Brit-rock has always had some sort of resurgence; think back to the glory days of Oasis, or any other time when the Brothers Gallagher weren’t trying to tear each other’s heads off. What about the Verve, with leader Richard Ashcroft cementing his image, as well as his band’s, in the pantheon of  ’90s pop culture with their video for “Bittersweet Symphony?” These bands were ironically the originals of this type of resurgence of Brit-rock that can find its roots in groups like The Kinks, The Moody Blues and The Rolling Stones.

But with immense talent also came immense quarrels; a problem British six-piece group A Band of Bees (also known as simply The Bees outside of the U.K.) never have to worry about. Their pastoral flourishes mixed with that of a barroom/backyard blues romp always gave the right vibe and not one of conflicting egos and oppressive leaders. Their newest album, “Every Step’s a Yes,” departs from the romping blues element and inflicts itself with bossa-nova flavor thanks in part to frontman Paul Butler’s time in the Amazon and his work with fellow psych-folker Devendra Banhart. While the album has taken a backseat to more gentle arrangements that could be played over the radio station of your college library, suiting the needs for the dreadlocked and the bookworm, there is still some fun to be had which is a common signature among the group.

Lyrically the album lacks, but in these areas of lyrical lacking comes arrangements that sound as if they are playing with 20 guys rather than six. This is most evident on carnival jam, “Gaia,” where the chanting of “ya ya ya’s” and the chorus of horns carry on through a booze-fueled night. This drunken night finishes off with “Winter Rose,” a melancholic reggae tune that slips in and out with wobbly organ and climbing brass. A Band of Bees comes back full circle with their neo-Crosby, Stills and Nash signatures of “I Really Need Love” and “Silver Line” which don’t necessarily let-down but could definitely be made with much more emphasis on a catchy hook like they’ve had in the past.

Treefight for Sunlight
“A Collection of Vibrations for Your Soul”
Release date Nov. 8

It’s a surprise to find out a band with a name like Treefight for Sunlight comes from Copenhagen, Denmark. The country’s not exactly known for the tannest people on earth and the Danish economy—as well as Europe for that matter—is not having the best of times right now. But with Treefight for Sunlight and their recent album, “A Collection of Vibrations for Your Skull,” their country’s recent economic turmoil and downturn doesn’t seem to affect them at all—in fact the album is so drenched in sunlight and cheerful vibes, Beach Boy Brian Wilson’s pants just got a little tighter in the crotchal region.

“Vibrations” is the fullest sound I’ve heard from a European group so far; a feat that is incredible considering the group is only made up of four members, all of which contribute vocals. The songs are hopeful and amiable with good intentions. They sound at times like a cleaner, less whacked out MGMT who have managed to, strangely enough, remain virtually unheard of in the states. But that’s what I like about them; a group from Denmark of all places creates a sonic album that fully encompasses the individual on first listen. It’s like finding a dirty rock in your backyard, cleaning it off then finally realizing you have found something precious, valuable and sparkly in your hands.

The song that could easily launch the group to late-show glory would be “What Became of You and I” which acts as the group’s poster child for what their sound is like. It’s extremely catchy and easy to sing along to even if you can’t hit a soprano or countertenor. The intro to “Facing the Sun” is delicate and tingly; it’s the song you want to wake up to on a sunny Saturday morning…even if you feel like death due to the worst hangover of your life from the night before.

If you were in Quinn Library at 10:53 p.m. on Tuesday night, I apologize. My soft whimpers of unperceivable musical pain finally caught up with me and I’m sorry you had to hear a grown man cry. There is only so much musical abuse one music nerd can take and my abuse came in the form of Lou Reed and Metallica’s collaborative album, “Lulu.” But this album is upsetting for other reasons. We’re talking about Lou Reed here, a living legend who has seen, touched, tasted and snorted everything known to man (only second behind Mr. Keith Richards). Next we have Metallica, arguably the most successful heavy metal group of all time, the ones who taught us how to ride the lightning and make us realize an album cover had the potential to be…well, all black. I love Lou Reed. I love Metallica. I hate “Lulu.”

I’m sad. I’m pissed. I want to woefully laugh. I want to exploit myself in front of a camera while undressing. I want to look into the eyes of the strange bald man in the library that shushes everyone and dare him to tell me to lower my bag ruffling of potato chips down to a minimum.  If this sounds like I’m rambling, it’s because I am. I really have no cohesive words for “Lulu.” Instead, I’ll let loose some comments from fellow music fans courtesy of music blog Stereogum: “It is an old man rambling over a mediocre rock band…fail;” “Can’t wait for the Iggy Pop/Megadeth album. Keep em Comin!”, “This is an Elephant Man of albums.”

Yes good sir, this is the Elephant Man of albums: bulbous, hideous to others at the sight (or listen) of it, incomprehensible and painful. This is shit. A big, smelly bed pan filled with Lou Reed and Metallica’s misshapen diseased shit.