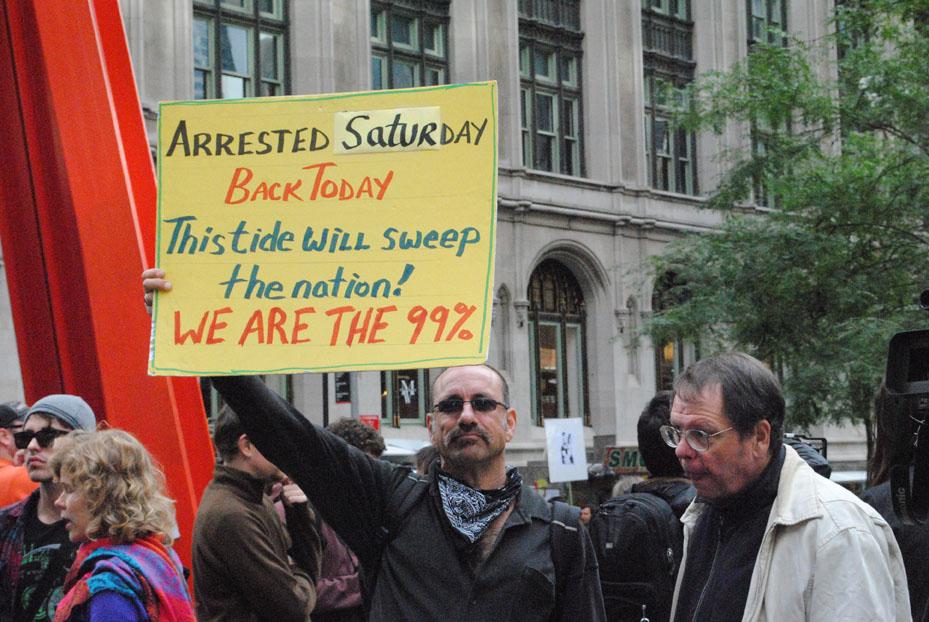 Protestors continue to occupy the space of Wall Street despite the complaints of nearby residents. (Charlie Puente/The Observer)

As the Occupy Wall Street (OWS) movement continues to gain momentum in Zuccotti Park, complaints of noise and sanitation have increased. This prompted city councilwoman, Margaret Chin, to create the 24-hour hotline called Quality of Life on Oct. 19, allowing local residents to call a representative of the hotline and make complaints about the protest’s affects.

Eddy Davis, a local protestor, said, “Noise is a small price to pay.” He said that when there are so many people passionate about a cause, it can get a bit noisy.

According to Han Shan, representative of the Quality of Life hotline, residents near Zuccotti Park are fed up. Some protestors who have brought their drums play them loudly during the day. As of Nov. 1, Shan said that many residents see the loud drumming as a disturbance, asking the community board to limit the drumming to be between the hours of noon and 4 p.m.

Although time contstraints are placed on the drummers, the hotline continuously receives complaints, Shan said. “Residents of the area have complained about noise since construction began at Ground Zero.”

In addition to the noise levels, sanitation was also an issue for residents.

Lauren Minis, local protestor, said, “Sanitation is complex because people here are residents, workers, visitors and tourists. We want to build a tight relationship with the community so we’re listening to their complaints, acknowledging their demands, recycling and cleaning.”

Minis said that she held various pep rallies to spur people on as they swept up garbage and collected trash. Many of the people brought cleaning supplies such as brooms, mops and paper towels. They also covered the campsites and laundry area with tarps to protect the material from rain and dust.

In addition to cleaning, a group of people set up tables and gave out homemade sandwiches, fruits and soup. The kitchen coordinator, said, “We do a deep cleaning of the area and the kitchen twice a week. We make sure anything that can be recycled is recycled.”

People from different areas of New York City and the tri-state area have set up campsites near the perimeter of the square. Some of these protestors chose to stay anonymous, and instead just stated their first name and the state they are from.

John from Michigan said, “I’m here to support the environment and help clean up.”

Jayline from Vermont said, “Although we’ve only been here for a day or two, living here is doable. There are people constantly cleaning up and picking up trash.”

Fordham students like Jaime Rodriguez, FCLC ’14, believed that more students should get involved with preserving the protest space, she said, “This is a big moment in history. There have been many developments and the people are taking care of the area.”

In addition to these local complaints, protestors at OWS were also asked to follow a Good Neighbor Policy.

The policy does not permit OWS protestors to use drugs and alcohol, say violent words, abuse physical or personal property, drum for more than two hours each day, litter or harass the public.