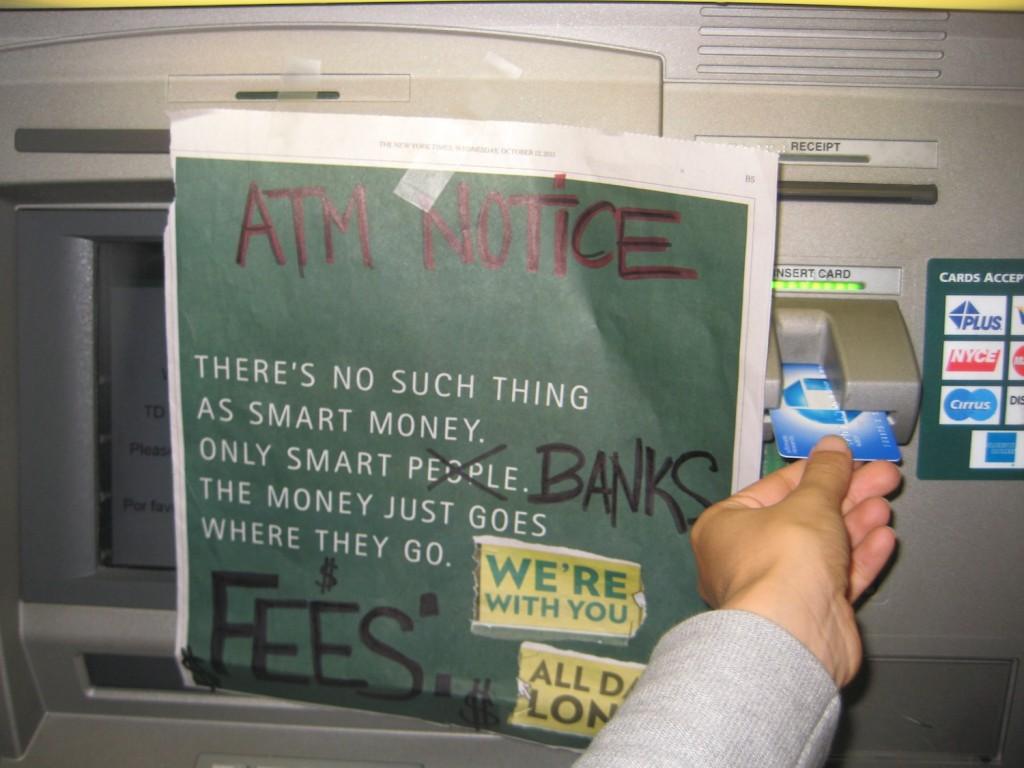 It may be your money, but the bank will find a way to take it from you in any clever way they know how.

“Here’s an idea! How’s about we charge them money for spending money, unless they have a lot of money? You know, so if they can afford to pay the excess fees, we won’t make them pay the fees. But if they don’t have a lot of money, and they just spent the little money they had, they should have to give us some more money. It’ll be funny.”

I assume this was the reasoning when Bank of America announced their new debit card policy: consumers who use their debit cards to make purchases would have to pay a five dollar monthly fee. That means if you want to use your card to buy groceries or to pay for a cab or maybe to buy a ski mask to rob a bank, a five dollar fee will be charged to your account.

This is supposed to go into effect early next year, unless the cardholder has a premium or privilege account, in which case the fee does not apply. That makes sense, because banks don’t want to lose their clients who have more money. It makes a lot of sense.

So what are my options? I could switch banks, use cash for purchases or swipe my credit card.

With more banks looking to hit their clients with service fees (Wells Fargo and Chase, to name a couple), I’m not looking to join another Henry F. Potter-esque bank (Don’t know who Henry F. Potter is? See “It’s A Wonderful Life.”). My best bet would be to join a credit union. Credit unions are non-for-profit, meaning they exist to serve their members, not to maximize profits for shareholders. That’s incredibly reasonable.

Unfortunately, I’m probably not going to switch anytime soon. Credit unions tend to be local and since I can only work part time as a student, I need my parents to pay my rent. That means money from Texas sometimes magically appears in my New York ATMs. So I’m stuck with Bank of America, for now.

The fee isn’t outrageous. I could find a way to save an extra five dollars a month. For example, if I chew my food less, I won’t have to brush my teeth as often, prolonging the life of my toothbrush, saving me money on a replacement. It’s easy to save money.

But I don’t want to change my behavior for a bank. The principle is outrageous. And, as we all know, banks usually take an interest in the principal of their clients, so I have a right to be upset. A little bank humor there.

The bank wants me to use cash to buy things. Or even better, credit cards, because they profit if I mess up on a payment. Unfortunately, it’s against my personal code to pay for things with cash anymore. To the bank, using cash makes sense, but to me, it only makes cents.

Since I don’t carry a change purse, the pennies and nickels I get stuck with after a purchase just find their way into a jar on my shelf. It brings a new meaning to the term “old money.” By the time I gather enough pennies to make a trip to the bank worthwhile, my penny has probably decreased in value.

The day I realized that a debit card allowed me to pay for things to the exact amount was a glorious day in my financial journey. Besides, according to the U.S. Mint, the cost of making a penny in 2008 was 1.7 cents. It’s illogical. I can’t get behind such a backwards system.

The argument for penny preservation is rooted in a fear of change. Ironic, I know. Simply put, a lot of people like Abraham Lincoln’s head on their coin. Hell, I’ll put his picture on my debit card if it means I don’t have to use cash. Besides, I’d rather not have a full wallet if I get mugged.

If I can’t use my debit card, and using cash is preposterous, I’m stuck with credit cards.

Still, paying for everything with a credit card can be just as risky. If I don’t pay my bill in time, I have to deal with tough interest rates (since I’m a non-premium, unprivileged student) that only support the money-grubbing banks further. Again, banks are a lot more accommodating for people who have a lot of friends named Benjamin. My closest friend is named Ramen.

I can’t use my debit card and switching banks is out of the question for now. It seems that it’s time to make a choice. Cash or credit? Either way, I’m getting robbed, right?

I guess I can at least decide who I want my mugger to be: a guy in a hoodie, holding a knife or a guy in a suit, holding a pen. Maybe I can put all my pennies in a sock and use that as a weapon. Cash it is.