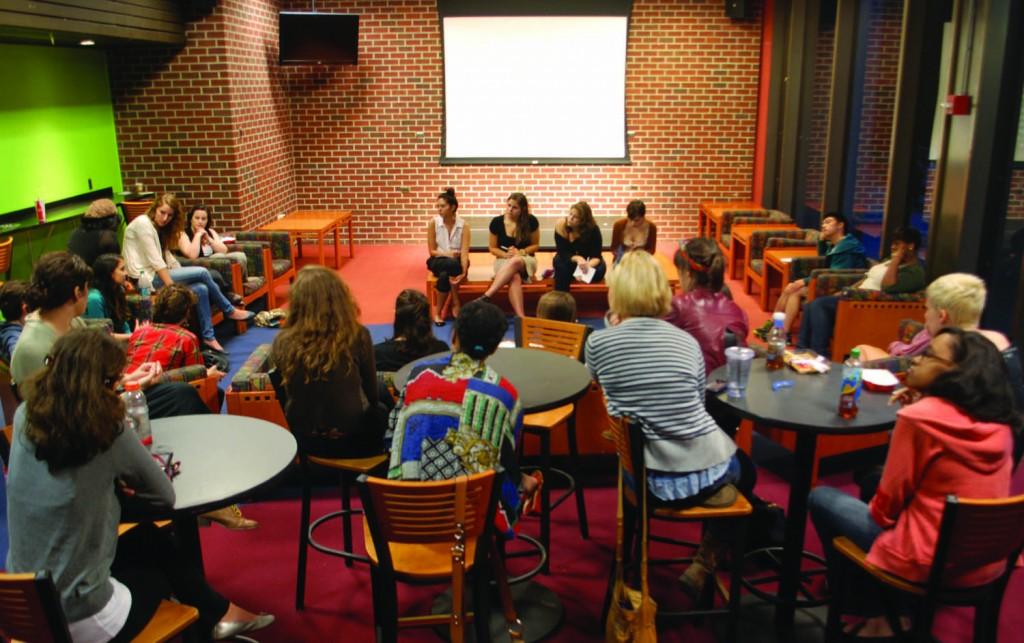 Streets were crowded with scantily clad protestors, similar to the woman above, at the New York City SlutWalk in Union Square. (Katherine Fotinos/The Observer)

By MONIQUE JOHN and REX SAKAMOTO

Demonstrators walked the streets yielding signs with comments like “Consent is Sexy.” While most participants were fully clothed, many sported lingerie. A minority of men and women marched topless in the cold.

Jenny Kessler, FCLC ’15, a student from Boston, Massachusetts said that Slutwalk was big there, but had a stigma. She said, “When I found it was supported at Fordham, I was really enthusiastic about participating.”

Protestors handed out pamphlets that explained the purpose of the SlutWalk route. The literature said that the route was a direct response to the acquittal of NYC police officers Franklin Mata and Kenneth Moreno in May. Meta and Moreno were allegedly accused as rapists of a woman in December 2008.

According to CNN, the first SlutWalk march took place in Toronto, Canada in April after police officer Michael Sanguinetti stated, “Women should avoid dressing like sluts in order not to be victimized,” at a university safety session. Slutwalk is now a global initiative fighting misogyny and promoting sexual positivity.

FCLC SlutWalk participants shared why they thought the walk was important.

“I know friends who have been raped,” Nadia Pinder said, FCLC ’15. “I can’t believe they thought it was their fault just because of the way they were dressed. We have to give [assailants] some accountability,” she said.

A rally was held after the march and included speeches and performances from poets Eboni Hogan, Eileen Myles and Amber Stewart, activist Jocelyn Gill-Campell and the band Witches in Bikinis.

Hogan said that it is both “inspiring and heartbreaking” to see so many people together a cause that she is passionate about.

However, she said, “it’s heart breaking because by seeing so many people together here, you see that rape is not a small issue. This many people here telling their stories and holding signs shows it’s a disease. Everyone is affected by it.”

In preparation for the walk, Fordham’s feminist student club, Isis, met in the Student Lounge on Sept. 29 to discuss the meaning of the words “slut,” “feminism” and the goals that they hoped to achieve by participating in Slutwalk.

In the meeting, attendees did not reach a consensus on what the word “slut” fully meant, but Loreal Lingad, FCLC ’14, said that a woman who fits the stereotype does not “give anyone the right to violate that person’s body.”

“It should not be about what people are wearing. The point is I could be wearing a bath robe and ducky slippers and people should still listen to what I have to say,” Jacqueline Mosteller, FCLC ’14, said.

On feminism, Lori Knight, adjunct professor of FCLC’s communication and media studies, said, “Feminism means equality, standing up, having a voice, taking initiatives, its being taken seriously and being respected.”

The day of the protest, Isis created signs and chants for the march. By walking in Slutwalk, president of Isis, Rebecca Gehman, FCLC ’12 said, “I hope that people will realize that sexual violence is 100 percent unacceptable, and is not just women who should be stopping it, but everyone.”