“The Mill and the Cross” Confounds Bruegel Masterpiece 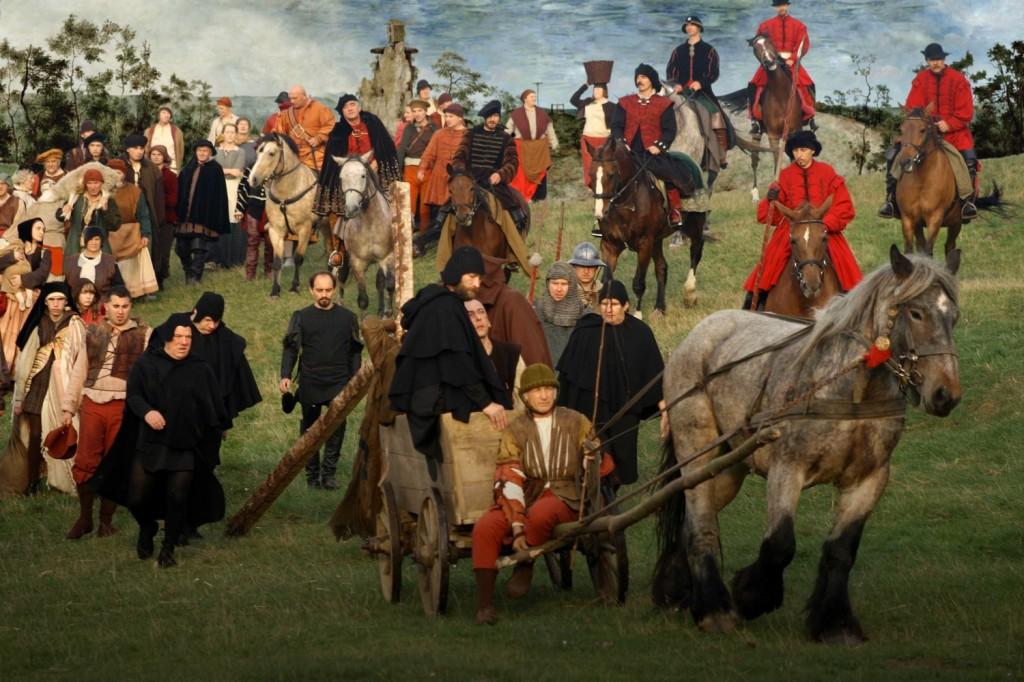 Caption: Lech Majewski's "The Mill and the Cross" superimposes actual actors over computer-animated back drops of paintings by Flemish artist Peter Bruegel. (Courtesy of Silesia Film)

Lech Majewski’s “The Mill and the Cross” is a good movie that falls aggravatingly short of excellence. The film, which opens at Film Forum on Sept. 14, shows us riveting visuals as it ponders the source of artistic inspiration. Two recurring and vexing flaws spoil the atmosphere and ultimately hinder what should have been a lovely piece of work.

Based on Michael Francis Gibson’s book of the same name, “The Mill and the Cross” dramatizes Flanders under Spanish occupation in the 16th century. Over the course of 48 hours, we witness the peddlers, families and nobility perform their regular duties until heretics are seized by the Spanish and tortured to death. All the while, artist Pieter Bruegel (Rutger Hauer) plans “The Way to Cavalry,” his painting placing Christ’s crucifixion in this setting, as a response to the multiple forms of injustice before him.

Similar to this year’s “The Tree of Life,” “The Mill and the Cross” abounds in great images and intriguing sequences. The film observes the daily activities of the working peasants with care and detail. One particularly mesmerizing scene shows the miller, his wife and his helper starting the mill both on the ground level and up precarious flights of stairs. The action on the ground demonstrates the power, size and antiquity of the machinery, and the shots of the helper climbing the stairs are both perilous and graceful.

On the other side of the spectrum are the torture scenes, which are violent without being overbearing. They provoke revulsion in both the overall action (stringing a seemingly innocent man onto a stake) and in the details (the mere sound of a crown of thorns sinking into onto a prisoner’s head). The balance of life and toil creates a striking and stimulating portrait of a community under oppression.

The film’s momentum crashes whenever it addresses the painting itself. The live action settings are combined with pieces of “The Way to Cavalry” presumably to project Bruegel’s viewpoint. The result is too distracting, forming shots whose painted backgrounds look more suitable for a display in the Museum of Natural History.

Much worse are the shots showing the painting’s entire panorama. Actors are superimposed over the artwork terribly, not even once appearing to occupy the same environment. Matte painting shots from sixty years ago are far more convincing than these shabby digital ones. These ugly blemishes instantly kill the good impressions generated by the preceding live-action scenes.

The other great mistake in “The Mill and the Cross” involves its scant dialogue. The only characters who speak English are Bruegel, his patron and friend Nicholas Jonghelinck (Michael York) and the lady representing the Virgin Mary (Charlotte Rampling). These characters are necessary to establish the film’s purpose, but their dialogue is too direct and on-the-nose. Everything they say consists of expository descriptions of the painting, the situation and their meanings. It might not be so bad if these figures were actual characters, but they are all removed observers to the action. They simply stand and offer bald and basic explanations of what we are watching. Because of these interjections, it seems the movies is telling us what it is about rather than letting us decide for ourselves.

I cannot help but be a little infuriated by how narrowly “The Mill and the Cross” avoids reaching its greater potential. When it succeeds, it transports me to another time and grants me understanding for a period and way of life vastly different from my own. Whenever its two defects appear, they push me right out of the moment and I land back in my seat, leaving me annoyed and frustrated. The fake backgrounds and the edifying dialogue are fixable mistakes, but Majewski saw otherwise and let them run rampant. Because of this, he has turned a superb film into just a pretty good one.