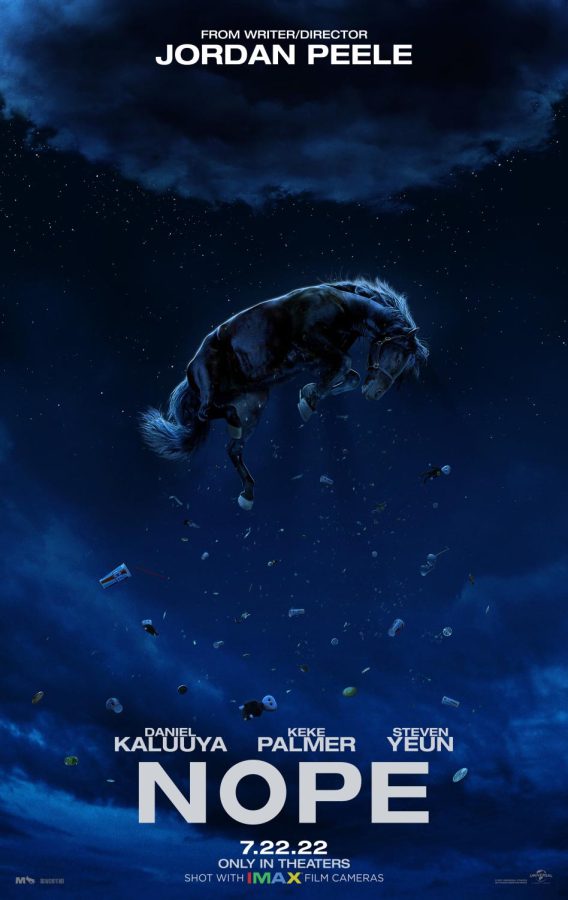 "Nope," released on July 22, is the third feature film directed by Jordan Peele.

I am not the type of person who normally chooses to watch or enjoys horror movies. Instead, I usually gravitate toward comedy, action and romance. I would rather watch a predictable Hallmark movie before picking up a film like “The Shining” (1980) or “Silence of the Lambs” (1991).

However, on the rare occasion that I decide to shake things up and pick the dreaded horror category, I prefer more psychological films similar to “Annihilation” (2018), “Parasite” (2019) and “Get Out” (2017).

When I finally watched “Get Out” last Halloween in my dorm, I finally understood the praise and acclaim that Jordan Peele has garnered with his brilliant horror and thriller films. The film is genuinely unique and the concept is something that teeters on the edge of reality and fiction, making it more thrilling to watch. Peele also added light comedic moments to put the audience at ease while maintaining concern for the protagonist’s situation. When my mother and I went to watch “Thor: Love and Thunder” (2022) in the theater and saw the preview for “Nope” (2022), we knew we had to see the movie as soon as it was released.

Peele has done it again with his new film, “Nope.” Unlike his other films, this movie, which was released on July 22, fits the science fiction genre as well as the horror genre. This different category allows for “Nope” to stand apart from his past two films and shows Peele’s adeptness in the horror genre.

A key theme in this film revolves around animals and an understanding of their true nature. The main character, Otis Jr. “OJ” Haywood, portrayed by Daniel Kaluuya, has intimate knowledge about animals and animal behavior, since he has been training horses his entire life.

He helped his father run their family ranch, which supplied horses for Hollywood movies and TV shows, until his father was killed in a freak accident by a nickel plummeting from the sky and driving through his eye, leaving OJ and his sister Emerald “Em,” portrayed by Keke Palmer, to own and operate the ranch.
OJ endures more subtle changes throughout the film, slowly becoming more confident and open in a perfect fit with the film’s progression.
OJ understands that animals’ true nature is something that cannot be changed or tamed by others, and he recognizes that training an animal and respecting it is a key part of connecting with them. He also knows when, and if, to fear animals and is especially adept at reading and recognizing animals’ behaviors and reactions.

The film lays the foundation for OJ’s relationship with animals when it shows him anxiously standing next to Lucky, one of his ranch’s horses, and attempting to warn a commercial crew to not do something that he knows will frighten and anger the horse, potentially endangering those around him. After he is disregarded despite his warnings, the crew frighten Lucky by flashing a reflective ball at him, causing him to kick behind him and narrowly missing one of the crew members.

This interaction is a key moment in establishing OJ’s knowledge and understanding of animal behavior, as well as a moment of establishing his character, specifically his lack of confidence and voice, seen in how the crew ignored him and his warnings.

The film later introduces the audience to Haywood Ranch’s neighbor, Ricky “Jupe” Park, portrayed by Steven Yeun. Jupe, a former child actor with a Wild West-themed mini park called Jupiter’s Claim, endured a deeply traumatic experience as a child when the titular chimpanzee on the sitcom “Gordy’s Home” reacted negatively to a balloon popping on set and maimed Jupe’s co-stars. Jupe was the only one left unscathed.

When the rampaging chimpanzee star Gordy spots Jupe hiding under a table, he lifts his fist to do their signature fist bump move. This interaction became a key moment for him, making him believe that he was spared because of a connection he and the wild animal held.

This viewpoint heavily contrasts against OJ’s, who grew up in an environment where he saw firsthand the true untamable nature of animals and the importance of fear and understanding when interacting and training with them.

Character development is also a key aspect of this film and is especially noticeable with OJ and Em. OJ endures more subtle changes throughout the film, slowly becoming more confident and open in a perfect fit with the film’s progression.
This movie steps outside of the bounds of Peele’s work thus far, and it will allow him to continue to develop more nonconventional stories apart from his past horror films.
When he is first introduced after his father’s death, OJ is soft-spoken, passive, docile and seemingly insecure in his new role as the Haywood Ranch owner. His insecurity is noticeable through how the commercial crew ignores his warnings about frightening Lucky. His soft-spoken nature leads to a near-accident, and he gets fired from the commercial, losing revenue and forcing him to continue to sell horses to Jupe.

Throughout the film, he becomes more confident, communicative and assured. He gains the confidence to train Lucky to combat the territorial, violent, UFO-shaped creature he and his sister dubbed “Jean Jacket.” He gains the strength to stand up and face this creature and is prepared to sacrifice his life for his sister, luring Jean Jacket away from Em and giving her a chance to escape.

Em’s character development is extremely crucial to the film. She is strong but indifferent to the family ranch and wants to sell it rather than work with her brother. She is curious and inquisitive about the true nature of the ranch and encourages her brother to help her capture evidence of Jean Jacket. Her active presence and continual interest in finding the truth about Jean Jacket moves the plot along. She learns to appreciate their family ranch and becomes closer with her brother as they work together to gather evidence of Jean Jacket’s presence, and without her help, they would not have been able to collaborate with other characters to gain the analog footage of Jean Jacket. Her appreciation and care for her brother later in the film is evident when she — despite his protests and attempt to lure Jean Jacket away — draws it in her direction, giving her brother a chance to escape. She then goes to Jupiter’s Claim where she unleashes a large balloon for Jean Jacket to eat and is able to get one last image of it before it seemingly explodes and dies.

“Nope” is an excellent film that leaves a lasting impression on its audience. Its unique plot allows for the film to be analyzed in depth, and the messages incorporated into the film all come together to fit into the larger story. This film is truly eye opening with its multiple layers of deeper meaning and significance with seemingly contradictory genres and themes that flow together nicely and not in an overwhelming way. This movie steps outside of the bounds of Peele’s work thus far, and it will allow him to continue to develop more nonconventional stories apart from his past horror films. I highly recommend watching this film, even if the horror genre is not your favorite genre. It is truly an amazing watch.