The most popular cosmetic surgery with an above-average mortality rate 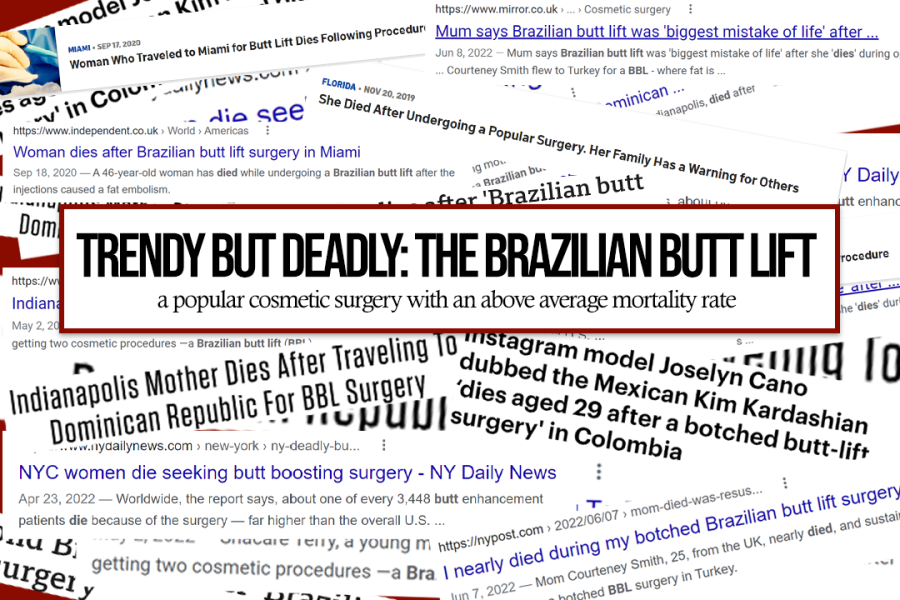 Whether in fashion, music or, more recently, body type, social media has played a large role in creating short-lasting trends. While idealized body types have always been an issue, social media users are constantly faced with an image of what their flaws are. While social media has played a major role in circulating the body positivity movement, fascination with and the popularity of a specific, ideal body type outshine the movement’s efforts. One of these body expectations is to have a tiny waist with curvy hips, leading to a popular plastic surgery: the Brazilian butt lift (BBL).

BBLs are performed when a surgeon uses liposuction to remove fat from one location of the patient’s body and inject it into and around the buttocks in order to give the patient a full, hourglass shape.

In addition to being one of the most common plastic surgeries, a BBL is one of the deadliest. A survey taken from almost 700 surgeons worldwide showed that 3% of the surgeons had a patient pass away after the procedure.

The British Association of Aesthetic Plastic Surgeons explained that BBLs hold the highest mortality rate, with one in 3,000 patients passing away after receiving the surgery.

Other deadly plastic surgeries are similar to BBLs or use the same methods as BBLs, such as liposuction and tummy tucks.

The reason why BBLs are so risky is because a vital heart artery is located near the butt. When the surgeon injects the excess fat into the desired location, the fat can enter the artery and block blood flow. Any blockage to an artery can be dangerous as it increases the risk of suffering a heart attack, stroke and death.

The rate of deaths related to cosmetic surgeries has only increased as cosmetic surgeries became more popular, largely due to promotions of the procedure by celebrities and social media users. According to a 2020 report, the death rate for cosmetic surgeries is about 0.25% to 0.50%for every 100,000 procedures.
While a Brazilian butt lift can increase a person’s self-confidence, especially in the digital age, understanding the risks that come with the procedure is vital and possibly even life-saving.
For BBLs, besides a blocked artery, there is a risk of fat embolism. This occurs when fat enters the patient’s bloodstream. As the fat travels through the blood, it will eventually cause a blockage in the lungs or block general circulation. If a BBL is still on a recipient’s mind, awareness of the signs of fat embolism can make a difference. According to the National Library of Medicine, signs of fat embolism are typically dizziness, shortness of breath, trouble breathing and weakness.

Fat embolisms can occur in the bodies of a BBL patient due to the fat being injected in or underneath a patient’s muscles. A recipient of a BBL can avoid this risk by going to an experienced board-certified plastic surgeon.

Depending on where you live and associated risks, a BBL can cost anything from $3,000 to $30,000, but some people looking for a cheaper BBL will take their chances on a “chop shop.” Chop shops are clinics that tend to be unsanitary, and the doctors may be unlicensed or very inexperienced.

Chop shop doctors can remain hidden for extended periods while continuing their dangerous practices because they go through extreme means to hide their identity and the legitimacy of their practice.

Another risk is the uncertainty that comes with the procedure. The first BBL was performed in 1960 by a surgeon named Dr. Ivo Pitanguy. But the surgery did not become popular in the U.S. until about 12 years ago, in 2010. Due to this, there is not much evidence as to what effects the procedure has in the long run.

While a Brazilian butt lift can increase a person’s self-confidence, especially in the digital age, understanding the risks that come with the procedure is vital and possibly even life-saving.