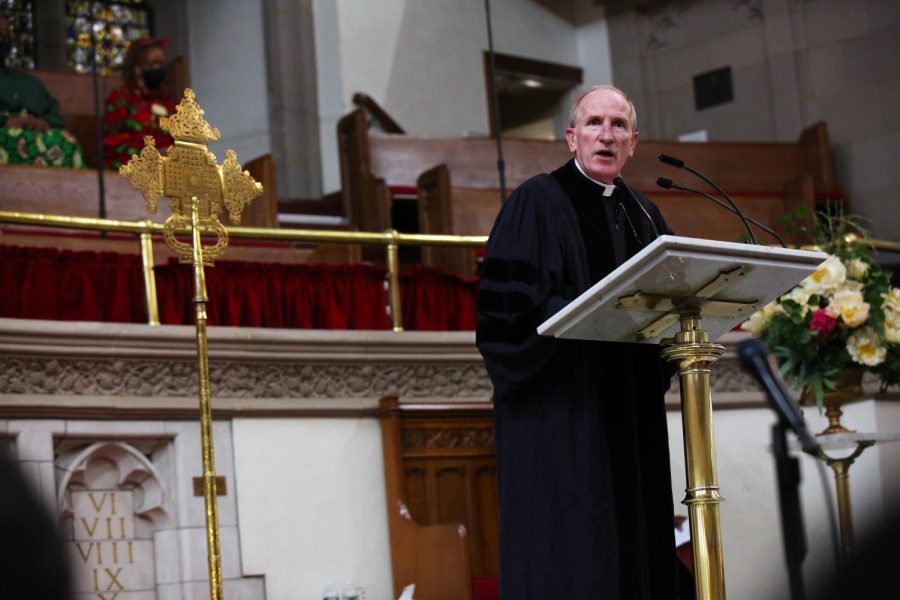 McShane addressing the congregation during his guest lecture to the graduating Class of 2022.

The Rev. Joseph M. McShane, S.J., former president of Fordham University, was invited to speak at Abyssinian Baptist Church for its Baccalaureate Mass on June 26. The invitation to speak was extended to McShane by the church’s senior pastor, the Rev. Dr. Calvin O. Butts, III, who delivered the commencement speech for the Class of 2022 on May 21. It served as McShane’s last public address as the university’s president before President Tania Tetlow, J.D., began her term on July 1.

The Baccalaureate Mass is celebrated to recognize members of the church’s congregation who graduated in 2022. According to McShane, Butts believes that it is essential for the congregation to recognize its graduates in their spiritual home.

The worship service was led by the Rev. S. Raschaad Hoggard, Ph.D., Graduate School of Education (GSE) ’22 and associate minister at Abyssinian. Hoggard and Michael Trerotola, GSE ’22, assistant university secretary and special assistant to the president, were the only two Fordham graduates of the Class of 2022 present and were recognized for their graduation during the Baccalaureate Mass.

The service included performances from the Total Praise Ensemble, public announcements and the announcement of the graduates and scholarship recipients. Butts was not in attendance at the service.

Attendees’ Comments on McShane’s Impact
The Rev. Mark Chapman, associate professor of African and African American studies and associate chair of the department, was called to the podium by Hoggard to introduce McShane. He added that, over the past 19 years, McShane has traveled across the country and around the world as the university’s greatest ambassador and compared him to Rudyard Kipling in his ability to exude the same warmth, charm and sincerity.

“I can say with some authority that it is not likely that the university will see a leader with his energy, enthusiasm, personal warmth, wit and charm,” Chapman said.

Earlier in the service, Hoggard announced the attendance of U.S. Representative Tom Suozzi of New York’s 3rd district, who was also invited to say a few words. Suozzi earned his Juris Doctor from Fordham Law School in 1989, and his daughter, Caroline, graduated from Fordham College at Lincoln Center in 2017. He mentioned that McShane changed her life when he encouraged his daughter to volunteer at the Jesuit Yap Catholic High School on the Island of Yap located in the Pacific Ocean, one of the four islands that make up the Federated States of Micronesia. The congregation applauded Suozzi’s connection to Fordham and McShane replied to Caroline’s accomplishments with a thumbs-up.
McShane’s Message to the Graduates
After the opening remarks finished, McShane began his speech with a verse from John 8:32: “You will come to know the truth and the truth will set you free,” which was the focal point of McShane’s address.

Before expanding on the verse’s meaning, McShane noted that he was nervous to give his remarks and cited two reasons for his nervousness: Abyssinian and its senior pastor. Abyssinian is a renowned church in Manhattan’s Upper West Side neighborhood of Harlem and is known for its rich history, including hosting the Rev. Martin Luther King Jr. in 1965.
McShane stressed that the meaning of the graduates’ diplomas are far from lifetime achievement awards and referred to them as “promissory notes” that they have taken out with God.
“This house of God has, for over two centuries, been a palpable force in the life of the city, the nation and the church,” he said. “I’m not just referring to the Baptist church in the United States — I mean the whole Christian enterprise throughout the world.”

The former president defined Butts as a force to be reckoned with, as well as a role model for college and university presidents across the world, pointing to Butts’ two decades at the helm of SUNY Old Westbury and the vision, integrity, wisdom, compassion and great love he brought to the job. He also spoke highly of Abyssinian and its history and expressed his honor when the invitation to be a guest preacher at the Baccalaureate Mass was extended to him.

McShane stressed that the meaning of the graduates’ diplomas are far from lifetime achievement awards and referred to them as “promissory notes” that they have taken out with God. He added that God is calling on the graduates to take up his unfinished work of redemption and to bring truth to the world.
“Always, every day of your life, be bothered by injustice, embrace the suffering, champion the poor, sweep the light of grace into the dark corners of human life” Rev. Joseph M. McShane, S.J.
“God did not give these gifts to you so that you can hoard them to yourself,” McShane said. “God has unfinished business with the world, a world that he loves with all his heart despite its failing age, and turns to graduates and asks them to take up his own work.”

He encouraged the graduates to reflect, be grateful and be generous in their work and emphasized that the future of the nation depends on them.

“Always, every day of your life, be bothered by injustice, embrace the suffering, champion the poor, sweep the light of grace into the dark corners of human life,” he said. “If you do so, you will truly be men and women who can and will transform the world with wisdom, learning, truth and love.”

The service concluded with a closing performance from the Total Praise Ensemble of “Wonderful Is Your Name.”

The Baccalaureate Mass was livestreamed and can be viewed here.