‘Islander’ Embarks on a Voyage Off-Broadway 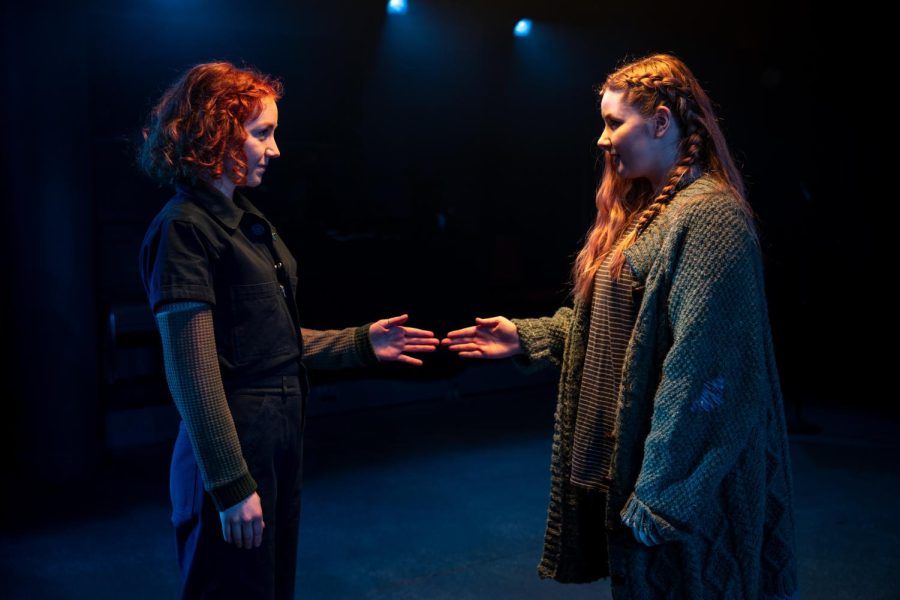 Two teenage girls find the importance of community in "Islander."

Lights illuminate an empty stage with only two microphones and a small trunk. Two girls enter from opposing corners of the theater, slowly approaching one another. When they reach their microphones, they offer each other a slight grin, making it clear that audiences of “Islander” are about to set sail on an adventure of a lifetime.

“Islander” depicts a struggling community on the fictional island of Kinnan. With a lack of resources and jobs, Kinnan citizens are forced to vote whether or not they want to try to maintain their way of life or move to the mainland forever.

The story centers around Eilidh (Bethany Tennick), the last teenager on the island who stumbles upon a beached whale on the shoreline one day.

Soon after that, a mysterious girl named Arran (Kirsty Findlay) washes ashore, claiming to come from the land of Finfolk, an isle from Kinnan myths whose residents are whale shepherds. Together, Eilidh and Arran find solace in their mutual transgressive natures and discover the importance of community.

“Islander” debuted in 2018 in the U.K. with nothing short of critical acclaim, winning the 2019 Best Musical Award at the Edinburgh Fringe, the world’s largest arts festival.
Tennick and Findlay manage to shift from one character to the next within mere seconds, offering each a sense of depth and distinctive qualities.
Making its U.S. premiere, the show marks the return of the off-Broadway theater Playhouse 46 after a year of renovations. The space has been transformed into a theater-in-the-round, in which audiences encircle the stage, creating a strong sense of intimacy between performer and viewer.

The show’s strength lies in the exceptional performances by Tennick and Findlay. As Eilidh, Tennick encapsulates the feeling of teenage optimism and brings forth a sense of youthful exuberance. Acting as her counterpart Arran, Findlay perfectly balances the mysticality and realism the role demands.

While the 85-minute show runtime may feel short, it is more than enough time for Tennick and Findlay to establish themselves as some of the most powerful vocalists in theater today.

Since it is a two-person show, the duo portrays a myriad of other minor characters ranging from Eilidh’s eccentric grandma (Findlay) to a man named Paul (Tennick), who spends the show lamenting his missing garden gnome.

Tennick and Findlay manage to shift from one character to the next within mere seconds, offering each a sense of depth and distinctive qualities. Their versatility is best exemplified in the song “Spikkin,” in which they jump between nine different characters arguing in a town meeting.

The brilliance of musician and lyricist Finn Anderson, alongside sound designer Sam Kusnetz, creates a fusion of technology and folk music, showing what is possible when you are willing to push boundaries in theater. To accomplish the complex harmonies and conversations between multiple characters, “Islander” employs innovative looping technology, making it stand out from other musicals I’ve seen in recent seasons.
If I have taken one thing away from “Islander,” it’s that the show is more than a piece of theater — it is a love letter to music enthusiasts everywhere.
The technique allows Tennick and Findlay to record themselves singing a cappella and place their vocals on top of one another. This forms the illusion of a full cast and allows for the formation of very tight harmonies, which is the strength of the soundtrack.

In addition, they produce ambient noise for scenes, such as crashing waves, and repeat them underneath the dialogue. The live layering of vocals adds a sense of anxiety to the performance, as one wrong note from the actors or cough from the audience will ruin the underscoring of the scene.

Where I find the show falters is its refusal to try to cater to its new American audience by toning down the thick Scottish accents, which is undoubtedly a bold directorial choice by the production team. While the accents don’t prove to be an issue during the songs, some lines of the dialogue felt unintelligible. I caught myself looking around the audience during certain scenes to ensure I wasn’t the only one having difficulty understanding the actresses. It was clear that others were equally confused.

The struggle did lessen as the show went on, as we all grew accustomed to the accents and began to recognize the various Scottish terms used. The production includes a glossary on the niche terminology in the playbill for audience members, which I definitely recommend reading before the show starts to lessen the language barrier.

Days after seeing the performance, I still find myself humming Anderson’s melodies or revisiting the soundtrack to relive Tennick and Findlay’s phenomenal performances. If I have taken one thing away from “Islander,” it’s that the show is more than a piece of theater — it is a love letter to music enthusiasts everywhere.

With a soundtrack more mesmerizing than a siren song, “Islander” proves to be off-Broadway’s best-hidden gem that shouldn’t be missed.