The Bronx Is Tough, You Grow Up Fast 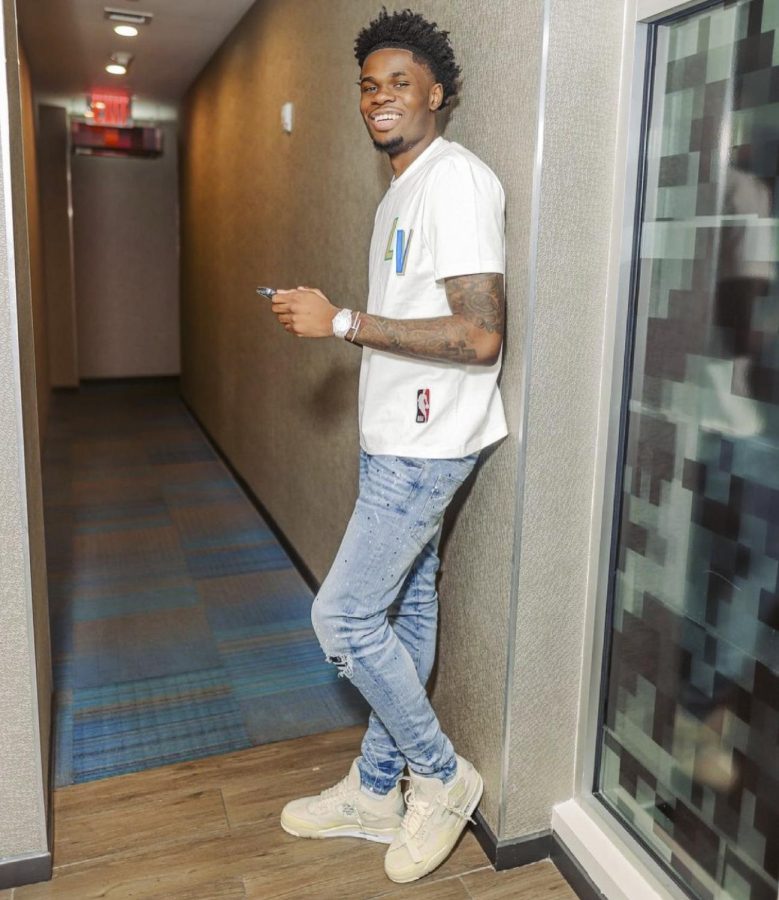 Cuba Ohams, GSAS '22, was born and raised in the Bronx.

Fordham University was founded in the Bronx long before it was dense and urban, but now it finds itself in the middle of a vibrant New York City community. The university is integrated in the stories of those who traverse its space and see its gates.

Within the Bronx, there is a resounding love for the game of basketball. Fordham basketball star Chuba Ohams, Graduate School of Arts and Sciences ’22, was born and raised in the borough. He has been involved in the sport since he was young, and it has largely shaped his life.

Whether it’s in East Tremont, Fordham or the South Bronx, neighborhood basketball courts are vessels for confidence, grit and toil. Ohams is more familiar with these courts than most — in a sense, he was raised on them.

These spaces inducted Ohams into the dynamic culture of basketball in the Bronx. If one should know anything about New York City, it’s that this town is the capital of hoops. NYC Parks maintains over 1,800 public basketball courts, serving as social hubs for many communities.
“People in the Bronx, we all walk with our chest high,” Ohams said. “We think we’re the baddest, toughest dudes.” Chuba Ohams, Graduate School of Arts and Sciences ’22
As accessible as they may be, it’s not easy to play in these boroughs. The Bronx is especially known for high-intensity ball.

“People in the Bronx, we all walk with our chest high,” Ohams said. “We think we’re the baddest, toughest dudes.”

From NBA legends hitting step-back threes at famed parks to a son of immigrant parents playing pickup games at the P.S. 121 blacktop, every court and every hoop has a story. The neighborhoods that orbit these parks have their histories ingrained in the fabric of the sport and the stories of those who played.
From Nigeria to New York
Ohams’ story began across the ocean in Nigeria, his parents’ home country. His father came to America alone at the age of 23. Living in the Bronx on his own and putting himself through college, Ohams’ father built his life from the ground up.

“He worked at a gas station to pay himself through school,” Ohams said. “His story taught me a lot. To be from another country, not knowing anybody but just starting your life believing in yourself, it’s definitely an inspiration.” Ohams’ father went on to start his own accounting firm.

There is an increasing population of African immigrants in the Bronx. In 2014, The New York Times estimated that around 4% of New York City’s immigrant population was of African descent. Of these immigrants, those who speak Nigerian indigenous national languages, Ibo and Yoruba, primarily settle in the Bronx.

Ohams’ father did not have it easy at first. The U.S. Census Bureau estimated that in 2021, 24% of residents in the Bronx live below the poverty line. Ohams’ father eventually built a solid foundation for his family through hard work, something Ohams said he is deeply thankful for.

Since the day Ohams was born, his dad instilled in him a work ethic that taught him to be independent but not afraid to ask others for help.
His toughness, grit and dedication to a sport he loved kept him away from violence.
“The same way my dad is, I try to do and learn things on my own,” Ohams said. “He taught me how important school was, and he carries himself like a boss. I got that from him.” This message has helped Ohams structure his life, and he connects it to the tough environment he grew up in.

Ohams’ family lived on East Gun Hill Road around Williamsbridge. The neighborhoods in the area have some of the highest crime rates in the borough. Because of the violence, the odds are stacked against those trying to make it out.

“I know it’s cliché to say, but it’s true,” Ohams said. “Where I grew up, you rarely find anyone that even got to college.”

Ohams wasn’t going to let this impact him. His toughness, grit and dedication to a sport he loved kept him away from violence. While the prevailing message from his parents was to work hard and stay in school, basketball was his passion.

“I was never a victim to the violence in my area because I used basketball as the tool to stay in the gym,” Ohams said.
Mayor of the Bronx
The culture and dynamism of the Bronx is exemplified in the way the game is played there. According to Ohams, Bronx basketball makes you grow up quickly. He went to his local park at P.S. 121 and saw grown men playing on the larger court. Adults playing gritty park basketball is intimidating to any younger person. Dunks are bigger, hard fouls go uncalled, and anything is fair game for trash talk.
What Bronx basketball threw at him, he learned to throw right back.
Reasonably nervous, Ohams would often hoop alone on the smaller courts while watching the older players. Although he wasn’t participating at first, he was observing. The games he witnessed were intense, and more than that, he saw that the people playing there built reputations. The good players were well known and respected. They were stars in the neighborhood.

Ohams worked up the confidence to start playing the tougher games, but the guiding hands of his parents were still there. Keenly aware of the crime and violence where they lived, Ohams’ parents made sure he was safe. They asked a neighbor to watch over him when he was younger and went to play at the park. In high school, Ohams began dedicating his time to the hardwood, honing his craft.

Eventually, P.S. 121 became Ohams’ second home, and he built a reputation for himself just like the players he used to watch as a kid. “It was at a point where as soon as I walked to the court, guys would see me from afar and know that was me. They would say ‘He’s already on our team.’”

What Bronx basketball threw at him, he learned to throw right back. Basketball trash talk is a skill, and he learned to master it. Being tough, aggressive and thick-skinned are basic criteria to be able to play on that court. Ohams mastered these too.
His signature, in-your-face, two-handed dunks have defined his playstyle and solidified his Bronx reputation.
“It was a motivation to keep getting better … It made me a tougher person,” Ohams said of park basketball. “I remember there was a time I was playing on the big court. I was trash talking this older guy, and the whole park really had respect for me.”

Those skills translated to the Rose Hill Gymnasium, where Ohams has become known for aggressive interior play. His signature, in-your-face, two-handed dunks have defined his playstyle and solidified his Bronx reputation. He directly attributes his skills to his time playing park basketball.

“Fordham’s in the Bronx, I’m from the Bronx … The grit and toughness made me a better player,” Ohams said about how his skills translated. “At the end of this year people were calling me the mayor of the Bronx.”
Harlem and the Bronx
The Bronx can easily be defined by how it plays basketball, as Ohams has experienced. But it can also be differentiated by how other communities in New York City play the game.

Ohams spent time playing at Wadleigh Secondary School in Harlem, and it was a big change for him. His parents’ hard work paid off, and until his decision to go to Harlem, he was studying at Salesian High School in the Bronx. It offered his family peace of mind and Ohams a good education, something his father often stressed.

“It was definitely a tough environment,” Ohams said of Harlem. “There’s a lot of violence there as well. But basketball was the tool that kept me straight. It didn’t let me veer off and become a victim to the violence.”
Building a Brand
In 2016, Ohams attended Putnam Science Academy in Connecticut. Detroit Pistons star Hamidou Diallo, whom he met in AAU basketball, attended the academy before him, and this was Ohams’ chief motivation for attending. Putnam Science Academy helped get Ohams noticed by colleges, but it also served as a platform to solidify his Bronx-built attitude.

It was in Connecticut that Ohams began to build his brand: The way he plays is with a chip on his shoulder and the entire borough on his back. When asked what he wants people to know about his work ethic, Ohams said, “No handouts.” That mindset was directly cultivated by where he grew up.

For Ohams, playing at Fordham was just one way of being involved in the Bronx. Being so close to his home, his community could come watch him play. “One of the benefits of going to Fordham University,” Ohams said, “is that my friends and family could come to a game at any time.” He has always represented where he’s from.

“I already played with a chip on my shoulder,” Ohams said, “but it gave me an extra chip just knowing that I’m not only playing for my teammates, I’m playing for the people in my area — I’m playing for where I’m from.”
As Ohams enters the national stage, he wants to let people know where he’s from and that he represents the culture of Bronx basketball.
Despite injuries and setbacks, Ohams’ many years playing at Fordham have piqued the interest of scouts and compelled him to declare for the NBA draft. Reaching the next stage of his basketball career will be tough, but his upbringing has prepared him for challenges.

As Ohams enters the national stage, he wants to let people know where he’s from and that he represents the culture of Bronx basketball.

Ohams has worked hard to get to where he is now, and what he represents is the deep love that the Bronx has for hoops. He believes that no matter where you are from, if you can play tough, be resilient, take trash talk and dish some out, then the borough will accept you.

Roots are clearly important to Ohams, and he wants to give back to his community. As a representative of his borough, he wants to show the best of his home to the world but also improve his native borough.

“I definitely want to push my community,” Ohams said.  “I want to be able to open gyms. In the long run, I want to do camps if I can.”

Ultimately, Ohams is a product of the Bronx, imbued with the drive to be the best player he can be. The Bronx is tied together by the sport. Ohams is a prime example of how basketball in the borough can frame and support the lives of its residents.