Sounding the Victory Bell: The Story of a Repurposed Artifact in the Bronx

Outside the Rose Hill Gymnasium, a WWII-era bell serves as a tribute to fallen soldiers and a celebration of community triumphs 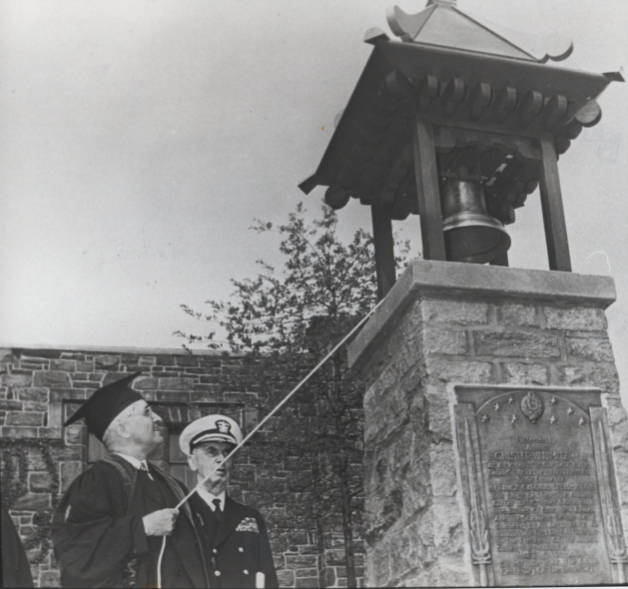 In the midst of one of the most eventful presidential terms in U.S. history, Harry Truman’s trip to Fordham on May 11, 1946, may appear trivial by executive standards. With peace treaties to negotiate and a Supreme Court justice to nominate, it’s strange that the former Missouri senator had any interest in visiting Rose Hill, becoming only the second president to do so. Matthew Connelly, the president’s appointments secretary and a Fordham College Class of 1930 graduate himself, likely had a hand in securing Truman’s attendance in the first place.

But in spite of his duties and lack of personal connection to Fordham, Truman served as a special guest during the celebration of the university’s centennial anniversary in the Bronx. After receiving an honorary degree, the president delivered a nationally broadcasted address on the terrace in front of Keating Hall. Fordham was celebrating 100 years as an institution, but more pressing events, understandably, overshadowed proceedings.
Outside the Rose Hill Gymnasium, Truman became the first person to ring Fordham’s Victory Bell, a monument that had been installed earlier that year.
Early in his address, Truman honored veterans attending Fordham on the GI bill after serving in World War II. Almost exactly one year after Victory in Europe Day, the events of the war still dominated the public conscience in the United States. Celebration and mourning went hand in hand, and shortly before the president delivered his speech honoring veterans seeking a prosperous future, he led those in attendance in a ceremony symbolizing remembrance and rebirth.

Outside the Rose Hill Gymnasium, Truman became the first person to ring Fordham’s Victory Bell, a monument that had been installed earlier that year.

The Fordham Ram reported at the time that the bell was erected as “a token of gratitude” from students for those who had given their lives fighting for their country overseas. Between 1941 and 1945, 228 Fordham men died in action. The bell itself made its own journey during the war, one that was antithetical to those made by the people it commemorated.

Beginning as a ship’s bell on the Kashiwara Maru, a Japanese passenger liner laid down in 1939, Fordham’s Victory Bell soon took on a utilitarian role in the Japanese war effort. In 1941, the Imperial Japanese Navy (IJN) purchased the ship and renamed it the Jun’yo, repurposing it as an aircraft carrier for a 1942 military campaign in the Aleutian Islands.

Primarily used to keep time and sound alarms, the bell traveled around the Pacific Ocean for nearly three years aboard the ship. Aircraft launched from the carrier engaged in battles in New Guinea and the Solomon Islands.

Though Jun’yo occasionally docked for small repairs, the ship remained fully operational for the IJN until December 1944, when three torpedoes struck the ship and killed 19 men during the Battle of the Philippine Sea. It never fully returned to action, and Japan finally surrendered in September 1945.

For students in the Bronx, the Victory Bell has remained a symbol of triumph, becoming an integral part of one of college football’s oldest traditions. Following victories at Coffey Field (or occasionally after wins on the road), seniors on the Fordham football team take turns ringing the bell to celebrate. The bell is also used during commencement ceremonies at the end of each year.

The plaque beside the Victory Bell suggests that it’s dedicated to men who lost their lives in a terrible war, but in practice it’s been reserved for celebrating the triumphs that have occurred as a result of their sacrifice.

In World War II, 228 men at Fordham, joined by hundreds of thousands across the country, fought and died in an effort to make the world safer, to allow everyone else to return to lives enriched by anniversaries and football games and graduations. Seventy-six years later, the bell continues to toll, forever echoing the indelible impact of a few hundred men on the lives of everyone who has passed through Rose Hill since.