The Journey of the D Train

When commuting between campuses using the subway, students find many opportunities to partake in the benefits of the city 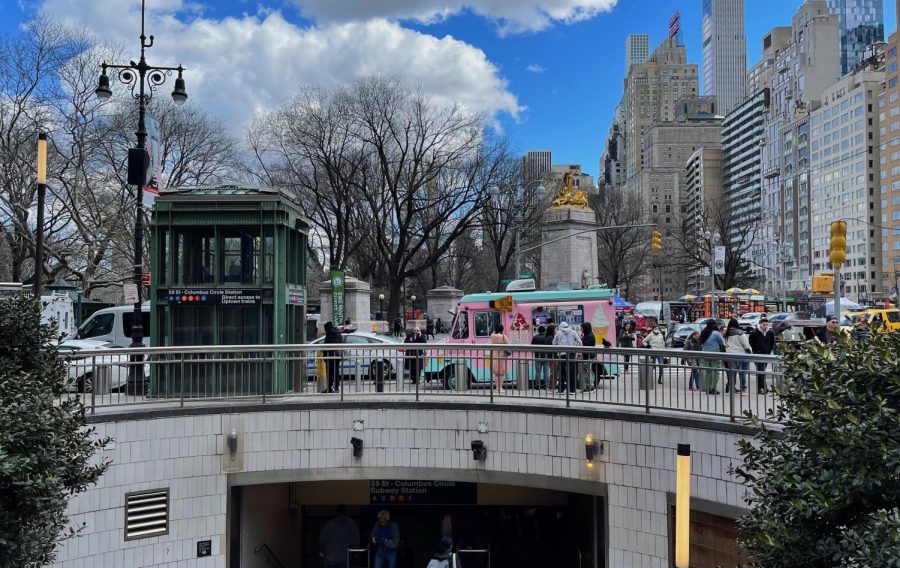 As one of the New York City subway’s original 28 stations, Columbus Circle was built in the late 1870s. The section of the station that was first opened by the IRT is now a designated landmark.

It is not uncommon to see Fordham students on the subway, either commuting to class or on their way to a weekend activity with friends.

For Fordham, the D train serves as one of the main modes of transportation between the Rose Hill and Lincoln Center campuses. It is the cheapest option, costing $2.75 one way compared to the Ram Van’s $3.50 fare and MetroNorth’s $7.25 off-peak ticket from Grand Central Terminal.

The journey from Rose Hill to Lincoln Center starts six blocks away from the Third/Webster Avenue Gate, where the Fordham Road station is located. The station is served by the B train during rush hour and the D train at all times. The station opened in 1933 as a part of the Independent Subway System’s (IND) Concourse Line, also known as the Bronx-Concourse Line. It is still the only section of the subway system that remains entirely underground throughout the Bronx.

As students walk along East Fordham Road, they will find the largest shopping district in the Bronx between Webster and Jerome Avenues. In the area, there are several retail stores, such as American Eagle and Foot Locker, along with a variety of dining options, like Taco Bell and Checkers.

The entrances to the station are located at the intersection of East Fordham Road and the Grand Concourse.

After paying the fare and boarding the southbound Coney Island-Stillwell Avenue D train, riders pass through nine stations before reaching the 59th Street-Columbus Circle station. Assuming a stop is not made at 161st Street to catch a Yankees game, the ride from Fordham Road in the Bronx to Columbus Circle will take about 30 minutes.

Of these nine stations, the D train passes through the 81st Street stop, which is home to the Museum of Natural History. Although the D train does not stop at the station, riders can take the B train, which runs on the local track instead of the express. In 1999, tile mosaics inspired by the museum were installed in the station.

This stop is worth a visit for anyone who admires art or for fans of the “Men in Black” franchise, as this station was featured in the 2002 film “Men in Black II.”

To get to the Lincoln Center campus, students walk to 60th Street and Columbus after exiting the train at the 59th Street-Columbus Circle station, which is serviced by the A, C, B, D and 1 trains This station was shared by both the IND and the Interborough Rapid Transit Company (IRT) Lines, though it opened as an IRT line in 1904. It is now referred to as the B-2 Division and A Division after the unification of the subway system that began in the 1940s.

As one of the New York City subway’s original 28 stations, Columbus Circle was built in the late 1870s. The section of the station that was first opened by the IRT is now a designated landmark.

Due to this station’s early construction, it has been subject to a few renovations. Platform lengths were extended by nearly 30 feet in 1910, and it was converted from a local stop to an express stop in the 1950s.

A renovation of the 59th Street-Columbus Circle station was proposed in 2002 and was completed in 2012, creating space for the Turnstyle Underground Market located inside the station. The market has shops, food and art for people commuting to enjoy before they head above ground. You do not need to swipe through the turnstiles to access the market, allowing anyone to visit without paying the fare.

After leaving the station, the Fordham Lincoln Center campus is just two blocks away.

Service on the D train began on Dec. 15, 1940.
Many songs, television shows and movies have included references to the D Train such as Seinfeld and Bob Dylan’s 1966 song “Visions of Johanna.”
The 1992 American drama Glengarry Glen Ross features the D train as a prominent background character when filming in Brooklyn.