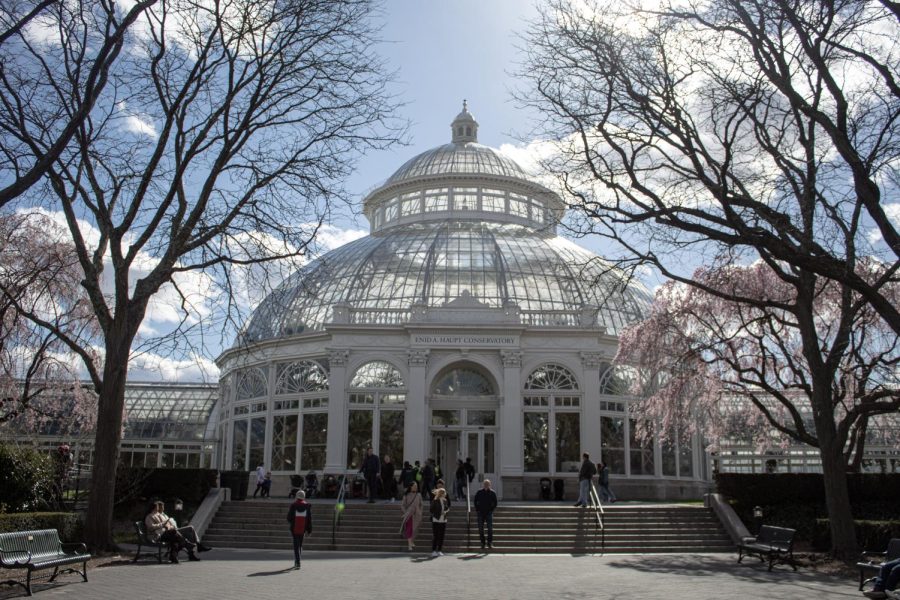 The Enid A. Haupt Conservatory was transformed into a display of rare and beautiful flowers by Jeff Leatham.

Every Fordham student knows the slogan “New York is my campus. Fordham is my school.” It invokes references to the many opportunities and perks of going to college in NYC, a prime example of which is Fordham’s relationship with the New York Botanical Garden (NYBG).

Located across the street from the Rose Hill campus, the NYBG is one of the largest botanic gardens in the United States, as well as a national historic landmark. It’s also a spot for members of the Fordham community to visit at least once during their time at Fordham. The garden has a long-standing agreement with the university to provide free grounds admission to all students and employees in exchange for using Fordham’s parking lot.

For a limited time this spring, the NYBG’s annual orchid show returned for its 19th year with the exhibit “Jeff Leatham’s Kaleidoscope,” which ran from Feb. 26 to May 1. This was the first time that the garden has put on a full-scale orchid show since the pandemic cut short the 2020 show. Last year, the NYBG hosted a smaller-scale version of the exhibit titled “Spotlight on Orchids.”

The garden once again invited Jeff Leatham this year to design the exhibit to make up for his show’s incomplete run two years ago. Leatham is a floral designer who has worked with many celebrities and famous brands, from Oprah Winfrey to Louis Vuitton. His talent for floral design was evident throughout the Enid A. Haupt Conservatory, which was transformed into a display of rare and beautiful flowers, perfect for welcoming the spring season.

At the show’s press opening, Leatham explained the meaning behind the title “Jeff Leatham’s Kaleidoscope.”

“Every time you look into a kaleidoscope you see a different image. You see a different scenario. You see a different story,” he said. “With this design, visitors will appreciate the beauty of orchids and see NYBG’s conservatory in exciting new ways.”
There were over 30,000 species across six continents, according to one of the informative signs in the exhibit.
Upon entering the conservatory, visitors were immediately greeted with towers of orchids and flowers in the center surrounded by mirrors that create a kaleidoscopic effect. Walking through the exhibit was like being transported into a forest. The orchids were vibrant pops of color against backdrops of green.

The exotic flowers came in all shapes and sizes and from all corners of the world. There were over 30,000 species across six continents, according to one of the informative signs in the exhibit.

Orchids’ diversity allows them to flourish in a variety of environments. For example, the first few rooms of the orchid show primarily feature flowers from the rainforests of Central and South America. Beyond a tunnel of rainbow-colored lights is the desert section, which displays orchids — as well as cacti and other plants — from drier regions such as those found in Africa.

The orchids displayed in this show were not only an impressive sight for visitors to see. They were also the result of important conservation efforts by the New York Botanical Garden. Many orchid species that grow in unique habitats are rare and at risk of extinction by poaching and deforestation.

The Convention on International Trade in Endangered Species of Wild Fauna and Flora (CITES) is a treaty signed by 183 countries to protect endangered plants and animals. In 1990, CITES officially declared the New York Botanical Garden a “Plant Rescue Center.” The NYBG has received thousands of rare plant species from across the world and worked to rehabilitate them, with the goal of sending them back to their natural habitats.