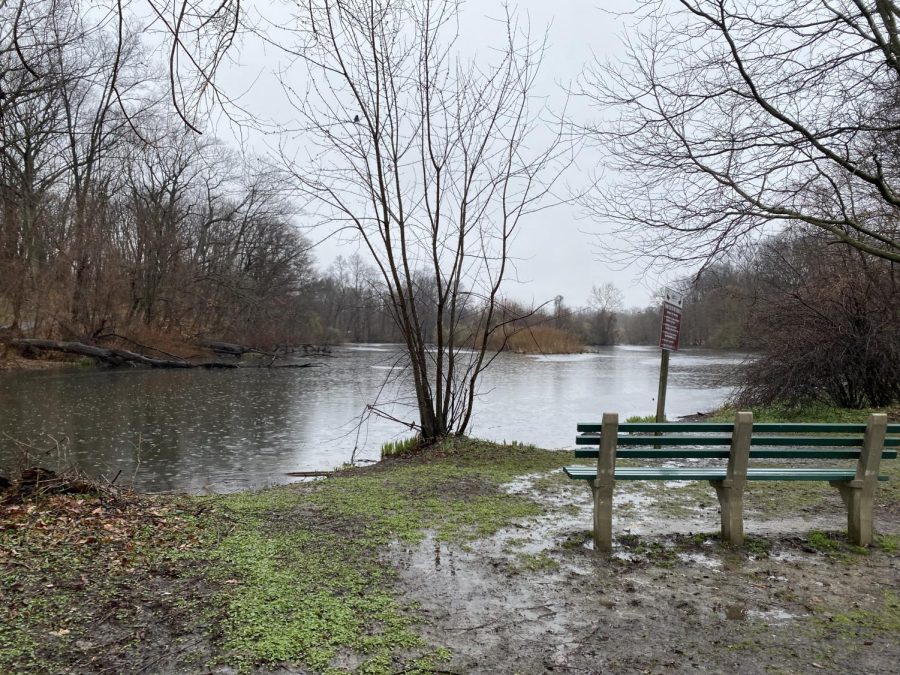 Parkway Oval Park sits right next to the Bronx River in Tuckahoe, New York. The park is just a train ride away from either Fordham campus on the Metro-North Railroad

When I arrived in Tuckahoe in early March, the water banks were still brown and barren of life, with several geese floating nearby. In just a few weeks time, flowers and sparrows would be livening up the area. The little greenery on this particular day came from the soccer and baseball fields that make up Parkway Oval Park.

Upon arriving, I had immediately taken a wrong turn down Scarsdale Road, leading me toward Yonkers and past The Wicked Wolf, which seemed like both an endearing bed and breakfast and something right out of a horror movie on this especially gloomy morning.

A quick retracing of my steps led me back on track down Lake Avenue, where I hit Bronx Street and crossed over into the park, which was still sprinkled with a light layer of snow from the night before. A couple of dogs bounded across the hilly terrain that leads down into a basin where the soccer field lies, the Bronx River Pathway runs and the river flows.
Her ancestors’ favorite part of the river to venture to, which they fondly nicknamed “Bare Ass Beach,” got its name after its skinny-dipping visitors.
Earlier that week, I had the privilege of speaking with Erin Provenzano, a local of Tuckahoe who shared with me and my classmate her family’s long-standing history with the area. She  described her connection to the Bronx River as “interwoven into the fabric of the river.”

She recommended that I visit Parkway Oval Park for its simple access from town and its views of the river. Her mother, Elaine, maintains a position as a children’s librarian at the local Tuckahoe Library just a few blocks over.

Her ancestors’ favorite part of the river to venture to, which they fondly nicknamed “Bare Ass Beach,” got its name after its skinny-dipping visitors.

“When the weather gets nice,” she said, “the river comes alive.”
I envisioned the river park to be a wonderful place to experience as a child.
The town comes to congregate by the water, as they’ve been doing for centuries prior. The river functions as a hub and connector within the community. The parks fill up with pedestrians, children playing, dogs and runners, and the plants and animals emerge for spring.

While she no longer lives in the area, Provenzano explained that from a particular point in the neighboring park, Malcolm Wilson Park, one can see the top of the building that her grandmother grew up in. This place holds many fond childhood memories for her.

With a bench for bird watching and a small bridge to the other side of the river, I envisioned the river park to be a wonderful place to experience as a child, growing up connected to the pathway of the water.

Provenzano mentioned a better understanding of the river has not only involved discussions of the beauty of the river and surrounding land, but also the negative impacts it has faced from climate change. Most recently, Hurricane Ida last year flooded the river onto the parkways, leaving hundreds displaced.

Despite these turbulent times, she emphasized the brilliance of the river and its ability to overcome obstacles.

“Nature knows how to heal itself,” she said.

She explained that if we as a society keep building up parkways around it and divert its route, it is in the river’s nature to return to its natural ebb and flow.
I caught sight of a curious copper bust of a woman shading her eyes, looking outward in the direction of the river.
While not as close to campus as Central Park, the park is near the Tuckahoe station, a quick ride up the Metro-North. Students looking for a day away from the bustle of the city can enjoy the quiet, tourist-free park and trails and, in the evening, roam the quaint streets for a bite to eat.

Tuckahoe was welcoming, albeit quiet on a Friday afternoon. Decorations for Saint Patrick’s Day appeared in many storefronts but were particularly present in the Growlers Beer Bistro, where I enjoyed fish tacos and a Growler Mojito.

Underneath the Gold Star Mothers Memorial Bridge, which crosses over the Metro-North Railroad tracks, lies the Tuckahoe station. While awaiting my train back to Manhattan, I caught sight of a curious copper bust of a woman shading her eyes, looking outward in the direction of the river. She appeared to be yearning, not quite satisfied with what she was seeing.
“At one point as commuters walk across, they are for a moment in the line of sight.” Arthur Gonzalez
The artwork that had caught my attention had been a part of a series of sculptures made by Arthur Gonzalez, titled “The Finder/The Seekers.”

Gonzalez explained his decisions in choosing the figures featured in his sculptures as such: “The old man who only has stories and little motivation unless he finds his counterpart, the young boy who begs for the old magic that he is mesmerized from the old man. Together they create an energy of living and re-living. The female across the way is a symbol of the intelligent and proactive character who is in her prime. In this positioning she holds in her hand an orb that has four small angled pipes that is the original prototype for the invention of steam power. She has found steam power.”

According to the MTA, Gonzalez’s time as an artist has afforded him the ability to investigate themes that “encourage serious deliberation and reflection on the relationship between personal concerns and world issues.”

“I was commissioned to make a sculpture for the face of both elevator towers. So this is the idea that I came up with in order to conceptually join both towers and also the commuters that cross from one side to the other,” he explained. “At one point as commuters walk across, they are for a moment in the line of sight. And hopefully will notice both sculptures.”

The bust is hung above a Fordham advertisement, which had initially caught my eye with its familiar maroon color and “New York is my campus. Fordham is my school” slogan. Located 18 miles north of the Lincoln Center campus, I found myself somewhere new, away from home. I caught myself reflecting on my day in this town I’d just visited, having ventured off into the horizon to find myself in this unfamiliar landscape.