In a survey from fall 2020, students expressed disappointment with Fordham’s advising system 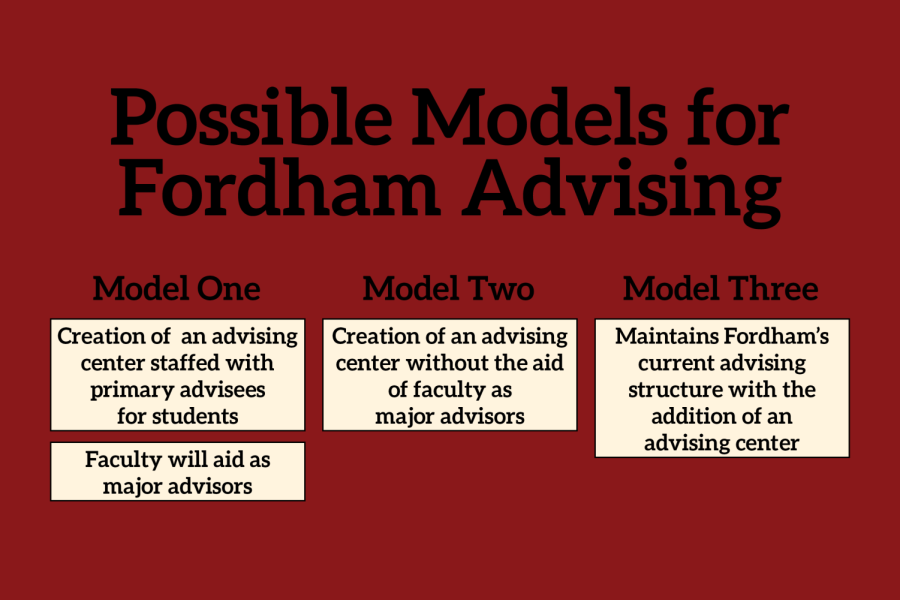 The university may follow one of these three models for advising, or it may be a slightly different version of one.

In the fall of 2020, Laura Auricchio, dean of Fordham College at Lincoln Center (FCLC), and Maura Mast, dean of Fordham College at Rose Hill (FCRH), assembled the Task Force on Undergraduate Academic Advising (TFUAA) to evaluate how academic advising could better serve undergraduate students. The TFUAA found that students feel disconnected and unsupported with the current advising system.

“Although our colleges have grown and student needs have evolved over the years, Fordham’s advising system has not undergone a full review or revision in recent memory,” Auricchio said. “In short, it was time.”

TFUAA began its research with a survey of all undergraduate students at Fordham in December 2020. In a report released to the student body by Auricchio on Feb. 17, 2022, TFUAA identified disparities in how advising is handled due to a growing undergraduate population. The report detailed the findings from the survey and stated that “students feel they are passed around to different advisors, depending on their needs, which makes them feel detached, and almost unwelcomed.”
“We felt that, although our retention and graduation rates are quite strong compared to national benchmarks, there is nonetheless room for improvement.” Laura Auricchio, dean of FCLC
All FCRH and FCLC undergraduate students were eligible to participate in this survey, which yielded a sample size of 361 undergraduates, a majority of whom represented FCRH. The report showed that overall, students did not reach out to many support offices often.

Auricchio also identified improving retention rates as an ultimate goal for TFUAA: “We felt that, although our retention and graduation rates are quite strong compared to national benchmarks, there is nonetheless room for improvement,” she said.

The report also noted that faculty advisers feel ill-equipped to help their advisees with nonacademic issues, causing them to refer students to class deans for all other issues.

Surveyed students expressed their need for a changed advising system, with suggestions for making advising more accessible, having a separate personal adviser for nonacademic concerns and decreasing the number of advisees each adviser is responsible for.

Upon releasing the report, Auricchio announced that two listening sessions would be held over Zoom for students to share their experiences and thoughts regarding advising. The first session held on Feb. 22 had zero attendees, while the second session on Feb. 28 had one attendee.

An anonymous feedback form was provided for those who could not attend the listening sessions. The form allowed students, staff, full-time or part-time faculty, and graduate student instructors to share their experiences with advising. Auricchio reported that of the 90 responses received, 18 were from students. Some survey respondents voluntarily disclosed their identities to Auricchio, and she conducted one-on-one conversations with them. Mast also spoke with the FCRH’s Dean’s Council of the United Student Government at Rose Hill and the Fordham Club at Rose Hill, which is a group of FCRH senior student leaders.
TFUAA also hopes to increase support for first-generation students through a new advising model.
Within the report, TFUAA identified three potential models Fordham’s advising program could follow in the future. In the current model, students have major advisers who are also part of the faculty. The first model proposed the creation of an advising center staffed with professionals to serve as primary advisers for each student. Each student will also have appointed faculty advisers serving as advisers for their major. This model follows Loyola University Chicago’s version.

The second possible model proposed creating an advising center but not appointing specific faculty as major advisers. Instead, those within the advising center would be in close contact with faculty to serve students academically.

The final proposed model maintains Fordham’s current advising structure with the addition of an advising center. TFUAA noted in its report that this model “maintains our identity and emphasis on cura personalis in interactions between faculty and students.”

TFUAA also hopes to increase support for first-generation students through a new advising model and training potential advising center employees on issues of inequity.
“We are still in the process of digesting the input we received from the listening sessions and anonymous feedback forms.” Laura Auricchio
“When I talked with students about (the new advising models), one student said that she’s first generation in college and she would have loved to have gone to an adviser who understood what it meant to be first generation,” Mast said in an interview with The Fordham Ram.

Currently, TFUAA has not released which of the three models Fordham’s advising program will adopt. “We are still in the process of digesting the input we received from the listening sessions and anonymous feedback forms,” Auricchio said. “In the coming weeks, we will be crafting a plan for a way forward, but I’m afraid that we have not completed that task yet.”

Auricchio explained that the final advising model is not limited to those outlined in the report.

“Although we do not yet have specifics, we do know that it will not be strictly one model or another, but rather a new model that takes from each of those proposed the aspects that garnered the most support,” she said.