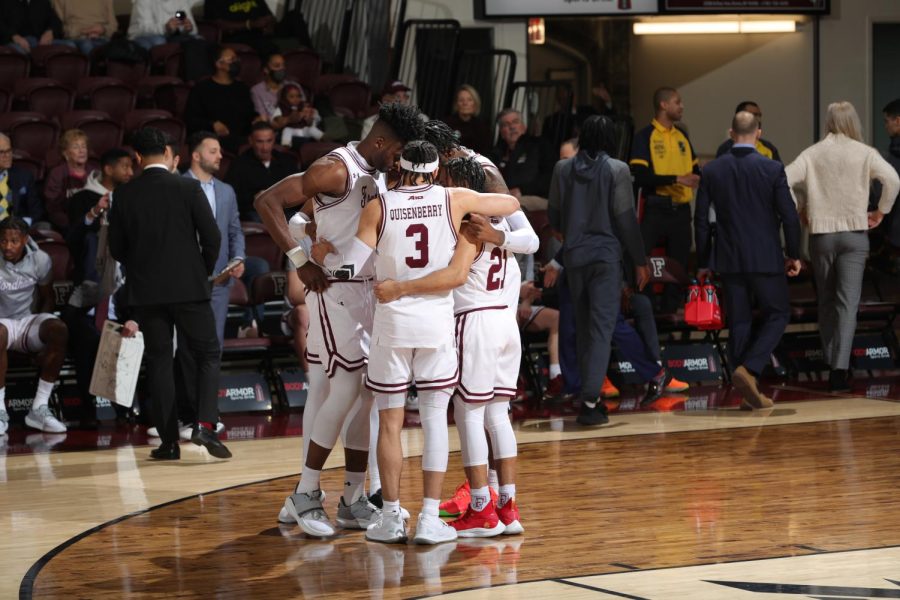 The starters on the Fordham squad huddle before their final game.

The Fordham men’s basketball team ended the regular season with a satisfying victory over the George Washington (GW) University Colonials on March 5, 70-66. The Rams, although not faring as well as their counterparts on the women’s team, finished 15-15 on the year and eighth in the Atlantic 10 (A10) Conference.

The game began in the Rose Hill Gymnasium, adorned with yellow and blue in support of Ukraine and Rostyslav Novitskyi, Fordham College at Rose Hill (FCRH) ’24. Novitskyi plays the center position and hails from war-torn Kyiv. A moment of silence was held for Ukraine and Novitskyi’s family.

He posted his 20th double-double of the year off 23 points and 16 rebounds, carrying his team to a victory in front of over 1,300 fans. It was the first game open to all fans since the start of the spring semester. Ohams’ stat-line broke the record for the most double-doubles in a season. The previous record-holder was Chris Gaston, FCRH ’23, with 19.

After a 12-4 Fordham run in the first six minutes of the game, GW picked itself up and responded with hot shooting behind the arc. The Colonials hit six out of ten threes despite the early rough patch.

The Rams were not worried and ran plays through Ohams. He used his size to rack up interior points. Solid defense by the Colonials on the perimeter did not translate to the paint, and Ohams controlled his part of the court, scoring eight points around the basket in the first half.

There were seven minutes left on the clock when Kyle Rose, FCRH ’23, picked the ball from the Colonials. GW had just regained the lead in the previous possession, 21-20. Rose ran the fastbreak but was blocked at the rim by Brendan Adams, GW ’22. The ball was passed all the way back up the court and fell into the hands of Qwanzi Samuels, GW ’23, who drilled his third 3-pointer of the half.

The crowd calmed down after this exchange, but a rapid-fire shootout reinvigorated the fans. With two minutes and change left in the half, Darius Quisenberry, GSAS ’23, swished a three to close the gap to two, 31-29.
The second half saw a ridiculous number of turnovers that benefited both teams.
The ball was quickly moved up by the Colonials, and Adams knocked down his squad’s sixth triple. The drama intensified as Rose returned the favor with a three of his own with a minute left on the clock.

The half ended with the Colonials in the lead, 36-34. The lead had changed only once, favoring the Colonials, and the Rams returned to the locker room to strategize.

The second half started, featuring tenacious defense. Novitskyi recorded a huge block, but the possession was quickly abandoned after a steal by James Bishop, GW ’23.

The second half saw a ridiculous number of turnovers that benefited both teams. The Rams scored 10 points off of turnovers, and the Colonials scored seven.

Quisenberry drilled a go-ahead three with 16 minutes left in the game, and the Rams held the lead until the five-minute mark. An 8-0 run by GW culminated in a huge fastbreak dunk by Ricky Lindo Jr., GW ’22, tying the game 61-61 with around four minutes on the clock.

The Rams bounced back and scored two back-to-back layups with around two minutes left. The game seemed to be over then, as the clock almost ran out and neither team scored. A poor foul by Antrell Charlton, FCRH ’24, sent Brayon Freeman, GW ’25, to the line. He made one of two shots with 14 seconds left, 65-63 Fordham advantage.

The outcome of the game was now a coin toss. The Colonials were just one possession away from a win. Freeman strategically fouled Colon-Navarro, who proceeded to knock down both of his free-throws.
The game ended as a Rams victory, 70-66. Ohams tied his career high with 23 points and 16 rebounds.
Freeman heaved himself up the court and willed in a fastbreak layup. Fordham called a time-out and returned to the floor only to be immediately fouled by GW. By now, there were three seconds left in the game, and a foul by Rose gave Joe Bamisile, GW ’24, a go at the line. He made the first, but a lane violation gave the ball back to Fordham.

With time expiring, Quisenberry sealed the deal with a layup before a thunderous crowd. The game ended as a Rams victory, 70-66. Ohams tied his career high with 23 points and 16 rebounds. Quisenberry scored 18, and Colon-Navarro had 13 points.

The Rams’ final game of the season was a thriller, but they now face George Mason University in the first round of the postseason A10 Tournament. The game will be played at the massive Capital One Arena in Washington, D.C., on March 10.