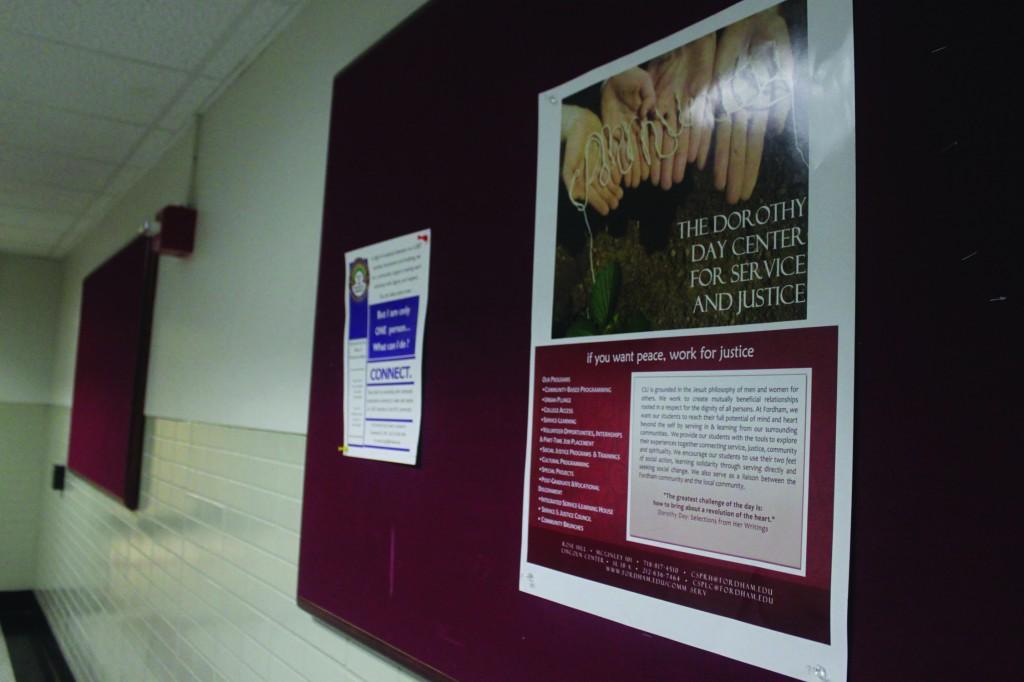 The Dorothy Day Center for Service and Justice recently posted a flyer about their community service program. (Sara Azoulay/The Observer)

Washington Monthly ranks universities based on three categories: social mobility, research, and service. Social mobility includes the recruiting and graduating of low-income students. Research is the producing of cutting-edge scholarships and PhDs at the university and service is the encouragement of students to give something back to their country and community.

The Rev. Robert R. Grimes, S.J., Dean of Fordham College at Lincoln Center (FCLC), said he believes rankings “take the humanity out of a college, precisely the quality by which one should be evaluating a college.” He was impressed with the 19 percent of Fordham students who receive the Pell grant, mentioned in the Washington Monthly. The number represented a higher percentage when compared to other private universities, such as Harvard and the University of Notre Dame. “It is a wonderful testament of Fordham being true to its mission,” Grimes said.

According to Patricia Peek, associate dean of Admission and director of Lincoln Center’s Enrollment Group, of the 19 percent referenced in the Washington Monthly ranking, 28 percent of Lincoln Center students were Pell eligible

In addition, the Huffington Post included an online photo essay. Their “Top 10 Colleges that Give Back to Communities,” featured Fordham in sixth place.

Community service based programs at FCLC can be exemplified through FCLC’s Dorothy Day Center for Service and Justice and Global Outreach (GO). One student said that he first got involved with the Dorothy Day Center through Urban Plunge, a program that introduces students to center and the local community, days before his freshman year at FCLC. Jaime Rodriguez, FCLC ’14, worked with Meals on Wheels, a program where participants deliver meals to the elderly. “[The Dorothy Day Center] gives you a new light on the city. You hear different narratives about how New York City is a great, but for many people there is struggle to get by day to day and there are many issues of social injustices that are often forgotten.”

Another opportunity for students to engage in community service is the GO program. They sends teams of approximately 10 students, led by one student leader and one chaperone, to live, work, and learn with partnering organizations throughout the United States and countries in Asia, Africa, Latin America and Europe.

Theresa Murphy, Coordinator of GO at FCLC, said, “GO tries to create relationships of solidarity to understand the challenges and issues facing different cultures and bringing it back to our community. We always talk about being men and women for and with others. It’s about thinking globally and acting locally.”

According to Murphy, GO trips take place during winter, spring, and summer breaks and are usually one or up to three weeks long. Some of the projects focus on service related experiences such as working with Habitat for Humanity while others are immersion experiences such as living with host families in different countries.

Although being positively ranked is a proud moment for Fordham, Grimes said that he dislikes rankings because “you’re never quite sure what they’re basing their rankings on and whether the indicators they use are reliable.” However, Washington Monthly is one that he prefers the most because “they measure characteristics of an institution that are so close to the mission of a Jesuit school—accessibility to those of limited financial resources and a deep commitment to service.”

Grimes said that community service “is worthwhile to take a look at opportunities to serve even after graduation.”