Fordham Women’s Basketball Outplayed by the University of Dayton 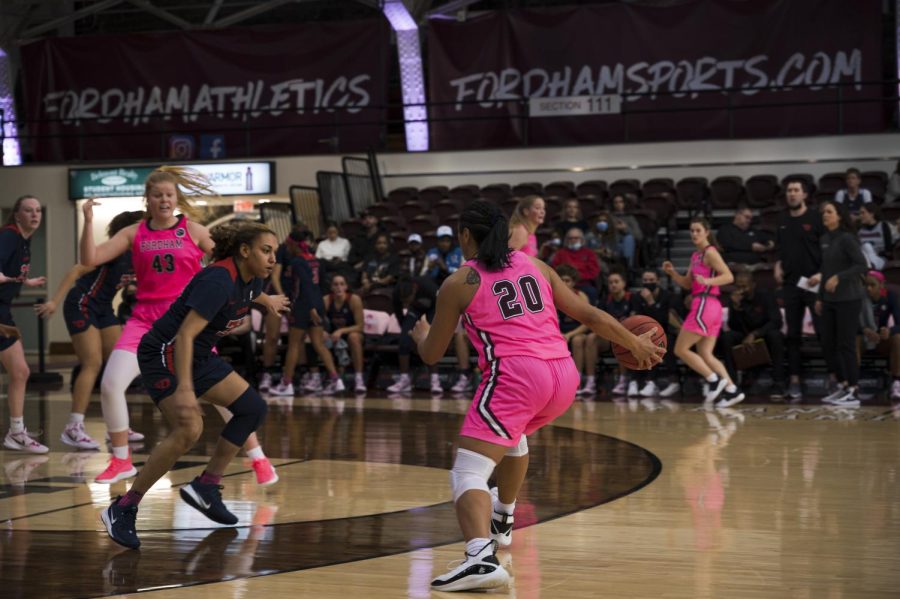 Kendell Heremaia handles the ball. She hit only two threes in the game, coming off 11 made threes against UMass.

Fordham women’s basketball fell short on Feb. 19, 48-47, in one of the worst offensive performances for either team since the start of the season. Down 16 points in the third quarter, Fordham failed to overcome the University of Dayton’s (UD) colossal lead, despite a final heave from the Rams’ stars. The loss extends a three-game slide that has jeopardized the Rams’ position in the Atlantic 10 (A10), as they now place fifth in conference standings. The Dayton Flyers stand unopposed at the top, one game ahead of the University of Rhode Island.

One player, in particular, entered this game with high expectations: Kendell Heremaia, Graduate School of Arts and Sciences ’22. She was coming off a huge game at the University of Massachusetts (UMass). On Feb. 16, she stunned UMass with 11 threes on 58% shooting. Against the Flyers, she would have another opportunity to showcase her shooting acumen.

The game started slowly at tipoff as both squads sought outside and midrange shots early. The Flyers attempted eight threes in the first half, but only one found its way through the net. The Rams fared no better, shooting one-for-15 from beyond the arc.
In the early minutes, the Rams began with good defensive form, and they made several adjustments.
The Flyers’ offense this season has been stellar, averaging 66.8 points per game and holding their opponents to 55.5. By the end of the first quarter, Dayton star Jenna Giacone, UD ’22, had played through the shooting struggles and led her team to a 12-11 lead over the Rams.

In the early minutes, the Rams began with good defensive form, and they made several adjustments. In the first quarter, Dayton’s plays were ground to a halt by Asiah Dingle, Fordham College at Rose Hill (FCRH) ’22, and Heremaia’s on-ball defense.

Heremaia had great expectations on her shoulders, but from the start it was clear that the offense wasn’t clicking. She reserved her shooting hand at first, knocking down only one three-pointer in the first quarter. At the halftime buzzer, she had missed four of her five attempts from three.

Additionally, multiple turnovers by Fordham players gave the Flyers second and third chances before the Rams could get a shot off on their end. Dayton adjusted quickly and took advantage of every Fordham mistake.
Good defense isn’t enough to win a game alone, and the Rams were still missing shots.
The Flyers took over offensively with interior shots and held Fordham to just four points in the second quarter. Dayton jumped to a 13-point lead by the end of the half, 28-15.

Entering the third quarter, Head Coach Stephanie Gaitley’s game plan forced more drives by the Rams, but the three-point shot remained instrumental. The Rams’ defense tightened up. The turnover advantage shifted entirely, and Fordham had Dayton fighting to hold onto the ball.

Fordham couldn’t produce anything off of the turnovers however, and as the third quarter ticked away, the prospects of a comeback seemed increasingly slim. Good defense isn’t enough to win a game alone, and the Rams were still missing shots. Dingle missed all three of her field goal attempts and only scored a single point off a free throw at the end of the third quarter.

Anna DeWolfe, FCRH ’23, was the standout player in the latter half of the game. She led the team on offense in the third, scoring the Rams’ last two baskets of the quarter. Although the period ended 39-28 in the Flyers’ favor, the Rams had retaken the momentum. Fordham needed one final run to take the advantage.

With two minutes left in the third, DeWolfe stole the ball and the crowd erupted in a frenzy of cheers. She laid the ball up for two and Dayton had to regroup during a timeout.

DeWolfe continued her run as the fourth quarter opened. She hit a jumper to close the gap to single digits. Although the Flyers quickly gathered themselves offensively with Giacone’s straight line drives, the energy in the gymnasium reflected a new mindset within the Rams.
Fordham’s success in the last few minutes can be attributed to tenacious rebounding.
The Bronx squad also increased the pace of play. Game actions were being run more confidently, and the team coalesced into one unit as the game approached its conclusion.

DeWolfe, again taking charge at the five-minute mark, split four defenders and stepped through for an easy layup. The crowd’s cheers were deafening. The Flyers’ lead was now in jeopardy.

Fordham’s success in the last few minutes can be attributed to tenacious rebounding. The Rams pulled in nine offensive and 10 defensive rebounds in the latter two quarters. None were more important than those that rallied the fans and gave DeWolfe multiple opportunities to close the lead.

Four minutes remained on the clock when DeWolfe hit her first three of the afternoon. The crowd praised her as she trotted back with an air of confidence. Immediately after her shot, the Rams drew two offensive fouls on the Flyers, the latter one sending Millie Prior, FCRH ’25, to the free throw line.

By the three-minute mark, free throws had cut the Dayton lead all the way to five, 46-41.

With one minute remaining, Kaitlyn Downey, Gabelli School of Business at Rose Hill ’22, received a hand-off and pulled up from three. Downey had been quiet up to that point, but she confidently swished the shot. The subsequent time-out by the Flyers could barely be heard over the fans.

The Rams were one score away from the lead, but Giacone did not let her team go down quietly, hitting a crowd silencing jumper for two.
With two games remaining in the regular season, Fordham women’s basketball is in a must-win situation going forward.
With 40 seconds to go, DeWolfe received a pass off of Dingle’s offensive push. DeWolfe drilled the deep three, and once again the crowd was on their feet, cheering at the top of their lungs. The score stood at 48-47.

With the game in the bonus, an intentional foul by the Rams paid off. The Flyers missed both free throws, and the Rams were handed one last opportunity to win the game. Poor shooting at this point was irrelevant; Gaitley called a timeout and drew up a play for DeWolfe. The Rams were singularly focused on getting DeWolfe open. She found an opening and threw up a mid-range floater as the buzzer went off, but it went wide. She ended the game with 21 points.

The valiant final efforts by the Rams were something to behold, but overall the game was one of the worst performances from the Fordham squad. Turnovers were rampant, shooting was poor, and the defense took too long to figure out the Dayton offense.

With two games remaining in the regular season, Fordham women’s basketball is in a must-win situation going forward. Even then, the final standings will be in the hands of other teams across the A10. The Rams’ penultimate game this season is on Feb. 23 at the University of Richmond.