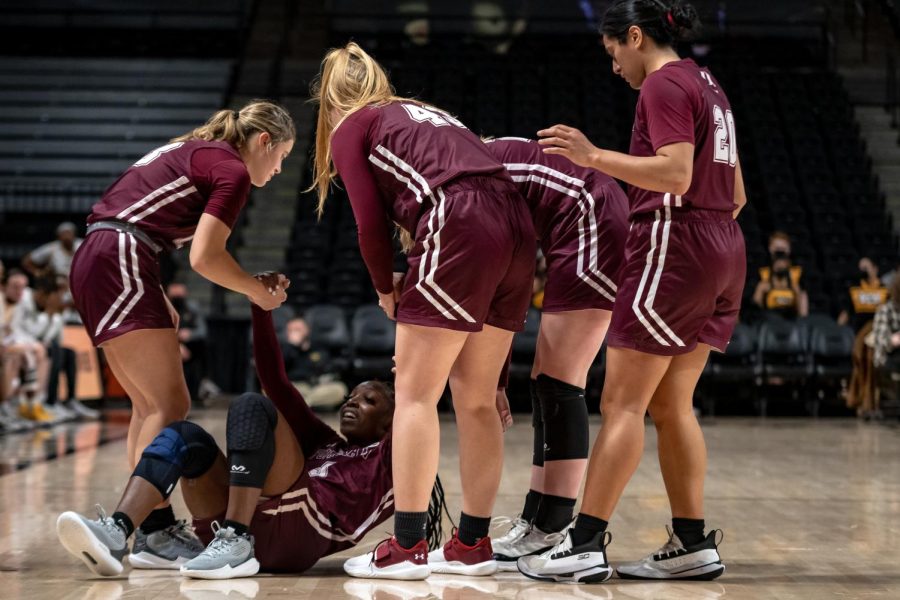 Fordham's loss to Rhode Island on Sunday marks a low point in the team's season.

The University of Rhode Island (URI) Rams completely overwhelmed Fordham women’s basketball on Sunday in a decisive 58-43 defeat. Following Virginia Commonwealth University’s upset victory over the University of Dayton, URI is now the only undefeated team in the Atlantic 10 (A10) and sits atop the conference standings.

Following an early URI layup, Anna DeWolfe, Fordham College at Rose Hill (FCRH) ’23, broke the ice for Fordham with a three. The game continued along these lines for some time; Rhode Island’s advantage on the floor was noticeable, but Fordham managed to equalize with effective shooting.
DeWolfe and company have proven effective out there in the past, but the wheels inevitably fell off late in the second quarter.
Rhode Island only led 19-15 at the end of the first quarter and would have led by much more if not for two three-pointers from DeWolfe and one from Kendell Heremaia, Graduate School of Arts and Sciences ’22. In most cases this season, the Rams from the Bronx have proved too physical for their opponents, but the shoe was on the other foot in this contest.

Led by forward Emmanuelle Tahane, URI ’22, Rhode Island firmly controlled the paint throughout the game, keeping Fordham’s offense on the perimeter. DeWolfe and company have proven effective out there in the past, but the wheels inevitably fell off late in the second quarter.

Down 29-26 with 1:18 remaining in the half, Asiah Dingle, FCRH ’22, brought the ball up the floor and made a costly turnover before fouling to stop the clock. Rhode Island guard Yanni Hendley, URI ’24, responded with a three-pointer and then stole the ball from Sarah Karpell, Gabelli School of Business at Rose Hill (GSBRH) ’23, on defense.

URI’s final possession ended with a Fordham foul, leading to two more points and a 34-26 lead. Fordham’s offense stalled in the opening minutes of the third quarter and the team would never get within reach again, even when opportunities presented themselves.

With 8:19 remaining in the third, Kaitlyn Downey, GSBRH ’22, earned a key defensive rebound but her pass bounced off DeWolfe’s head, leading to a turnover and URI score. Fordham only scored two times in the five minutes that followed.

If that miscue wasn’t telling enough, the final play of the third quarter emphatically proved that it simply wasn’t the team’s day.

With the clock running down, Dingle calmly dribbled to the top of the key, preparing for one last shot before the end of the quarter. Down 44-35, a three-pointer could have put Fordham within six going into the fourth.
After such a resounding loss to a top-tier opponent, Fordham’s postseason prospects are clearer and less hopeful.
Instead, the ball ended up in the hands of Maranda Nyborg, FCRH ’24, who forced an off-balance layup attempt and gave possession back to Rhode Island. With four seconds remaining, guard Chanell Williams, URI ’22, dribbled back up the court and hit a half-court shot at the buzzer. Fordham trailed by 12, 47-35, with one quarter remaining.

For a team that typically finishes games strong, Fordham seemed hapless in the final 10 minutes. Down by as many as 19 points with 6:44 left, winning was virtually impossible, but the game could have been closer. Fordham only managed three field goals in the quarter, however, and two late free throws by DeWolfe did little to soften a 58-43 defeat.

After such a resounding loss to a top-tier opponent, Fordham’s postseason prospects are clearer and less hopeful. With the A10 Tournament less than a month away, the team still has work to do to have any chance of winning another championship.

Fordham’s schedule doesn’t get any easier from here, as the team will next play the University of Massachusetts and Dayton on Wednesday, Feb. 16, and Saturday, Feb. 19, respectively. Both teams are solid A10 contenders that the Rams may have to deal with again in March.