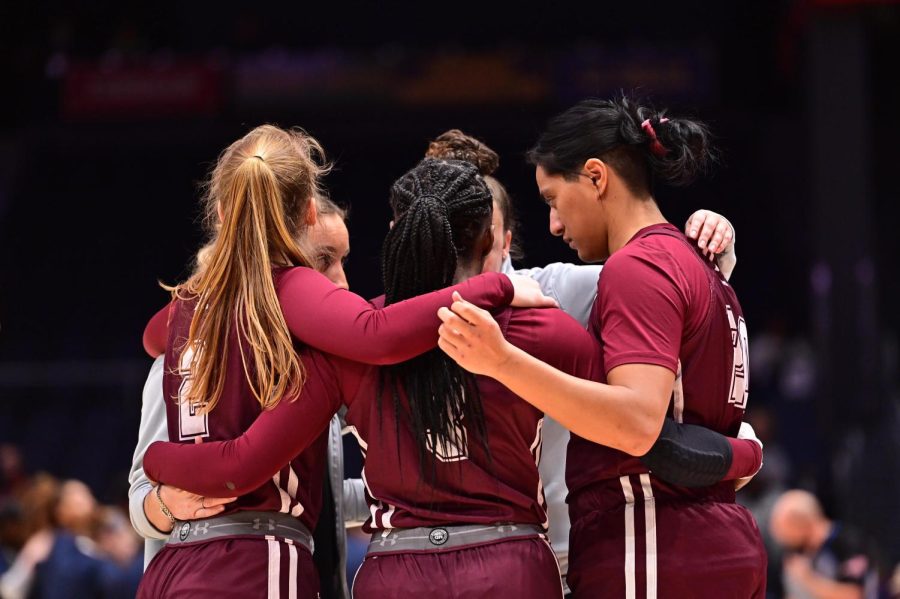 After winning six of their last seven games, the Rams have firmly established themselves as A10 contenders.

By GABRIELLA BERMUDEZ and PATRICK MOQUIN

For many college basketball teams, a single great season can represent a pinnacle for the program after years of hard work and sacrifice. A great decade, on the other hand, seems unfathomable by comparison. But after eight winning seasons in the last nine years, the Fordham women’s basketball team has made overachieving a cottage industry in the Rose Hill Gymnasium. With seven games remaining in the 2021-22 regular season, it’s still business as usual for the dynastic Bronx program.
Delivering on Expectations
The season has proven to be another booming one for Fordham, as the team currently holds a 15-5 overall record. The Rams are also third in the Atlantic 10 (A10) conference with a 6-2 record.

Going into the season, this success was far from unexpected. When Fordham was projected to finish third in the A10 preseason poll, Head Coach Stephanie Gaitley expressed confidence in the year to come.
The Rams have controlled the pace against almost every team they have faced with their unique defensive intensity.
“I feel this could be the strongest A10 season yet, and to be picked third speaks a lot to our success and consistency,” Gaitley said.

Gaitley is right about the team’s consistency, as the Rams have controlled the pace against almost every team they have faced with their unique defensive intensity. In the team’s most recent slate of games, many opposing offenses have been completely stifled. At this point in the season, Fordham’s defense has only allowed 57.1 points per game, the second-lowest average in the conference.
An Elite Defense
In a game against the University of Dayton on Jan. 23, the Flyers nearly lost their undefeated record with an unusually dull offensive showing. Going into the fourth quarter, Fordham led by 10 points, and although the Rams squandered that lead in a 52-48 defeat, the Flyers’ struggles cannot be understated.

Over the course of the game, Dayton shot 33.3% from the field. For a team that has scored 66.7 points per game on average, the Flyers’ 52-point performance represents their worst of the season. Both teams chased each other in points throughout the contest, and Fordham remained in striking range until the final buzzer.
After nearly a month out of action due to various COVID-19-related postponements, the Rams responded with one of their most successful stretches of the season.
Fordham’s competition with the St. Joseph’s University Hawks on Jan. 26 was an even clearer display of the team’s defensive prowess. The Hawks were held to just 10 points in the first half, eight of which came in the first quarter. The Rams weren’t particularly impressive on offense until the third quarter but nevertheless cruised to a 55-35 victory.

“Super defensive effort tonight,” Gaitley said after the game. “I think we are starting to understand the importance of defense and rebounding as we hit this stretch run.”

On Jan. 29, the Rams cut it close with the St. Bonaventure University Bonnies. The first quarter was strong for Fordham as the team put up 15 points and left the Bonnies lingering at nine. Like many of Fordham’s recent opponents, St. Bonaventure had a sluggish start and only scored 24 points in the first half.
Gaitley is aware of her team’s weak points and plans to strengthen her team on all ends.
In the fourth quarter, Fordham denied the Bonnies multiple chances to shoot and applied consistent pressure to secure a 62-54 victory.

After nearly a month out of action due to various COVID-19-related postponements, the Rams responded with one of their most successful stretches of the season, with only two losses. On average, Fordham produces 60.4 points per game while only allowing their opponents to score 57.9. The team has even managed to derail teams with superior field goal averages like Dayton.
Areas for Improvement
Fordham’s defensive abilities give fans hope for its success in the approaching A10 Tournament, which begins on March 2. As the tournament approaches, however, small mistakes can cost the Rams seeding later in the year. In the team’s matchup with St. Joe’s, the Rams fell behind the Hawks by four points in the first quarter and only took the lead five minutes in.

Although Fordham eventually pulled ahead of St. Joe’s and led by 15 going into the third quarter, the team’s rough start was a continuation of a dangerous habit. The display of great defensive tactics against a weaker team like St. Joe’s disguised the team’s inconsistency on offense.

Gaitley recognized Fordham’s weaker points on the floor when assessing the team’s overall performance this season.

Gaitley is aware of her team’s weak points and plans to strengthen her team on all ends.  “We will need to improve on cleaning up on our spacing and timing on offense as well as limiting turnovers.”
A Recognizable Core
The Rams’ offense may be a source of weakness at this point in the season in comparison to the defense, but familiar faces make improvement at the rim seem likely. Reigning A10 Player of the Year Anna DeWolfe, Fordham College at Rose Hill (FCRH) ’23, is having yet another stellar season, leading the entire A10 conference in scoring with 20 points per game. She was also named A10 Player of the Week after the Rams’ most recent stretch of victories.

Though DeWolfe remains the team’s undeniable leader, Asiah Dingle, FCRH ’22, has also had a profound impact on the team’s offense in her first year as a Ram. Since joining Fordham after a season at Stony Brook University, Dingle has scored 13.9 points per game while leading the team in assists and steals.

As a physical team on both offense and defense, the Rams have multiple players who play hard in the paint. Though a thinner roster hurts the team’s overall statistics, Fordham is the only A10 program featuring four players with more than 100 rebounds at this point in the season. Megan Jonassen, FCRH ’22, leads the Rams in this category with 115, 60 of them coming on the offensive side.

Kaitlyn Downey, Gabelli School of Business at Rose Hill ’22, has as much ability in the paint as she does from the three-point line, controlling opposing forwards down low on defense while shooting with 40.9% accuracy from beyond the arc on 86 attempts.

Kendell Heremaia, Graduate School of Arts and Sciences ’22, does not lead the team in any category overall but seems to do everything well. The team’s third-highest scorer also has 114 total rebounds, one short of Jonassen’s mark, and the second-highest free throw percentage behind DeWolfe.
Challenges Ahead
As the end of the season approaches, Gaitley is aware of the obstacles ahead for the Rams.

“This team loves challenges and we have a lot ahead,” Gaitley said. “I’m confident that we will meet them head on!”

With two victories under their belt in the past week, the Rams are firmly in the hunt for the A10 title. Fordham is not the best team in the conference, as both Dayton and the University of Rhode Island remain undefeated. These two rivals, along with plenty of outsiders, are capable of giving Fordham trouble in the postseason.

But with one of the most experienced and talented starting fives in the A10, Fordham seems to improve with every outing and is in an excellent position to compete. The next chapter in this storied program’s history awaits.