Rams Face Their Second A10 Loss Against the University of Dayton

The Fordham women’s basketball team fought a tough game against UD, but multiple fouls gave the Rams their fifth loss of the season 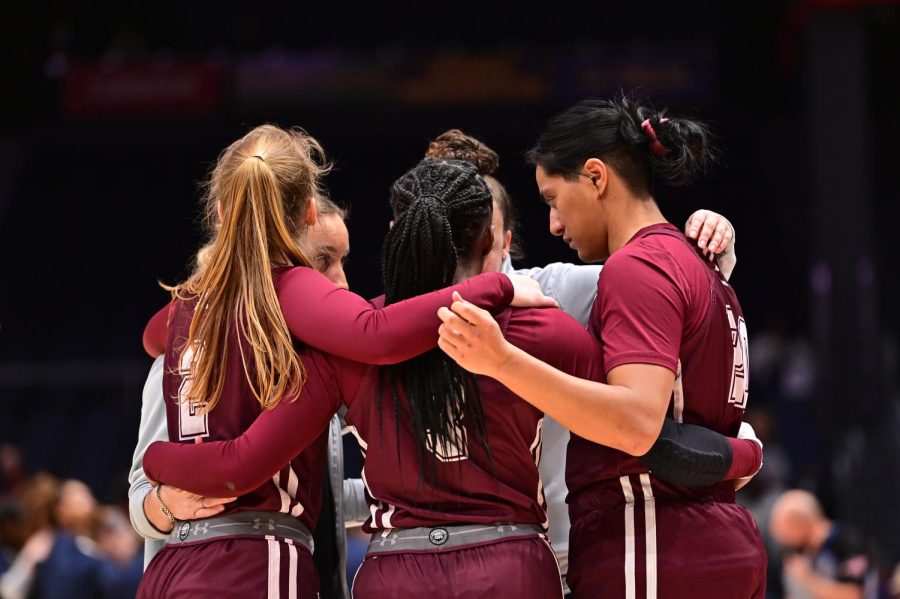 Fordham and Dayton played a tight game, trading a one-point lead back and forth throughout most of the game.

The University of Dayton (UD) Flyers ended Fordham’s four-game win streak with a four-point victory, 52-48. Fordham’s defeat was its second Atlantic 10 (A10) loss of the season. Fordham had previously lost to La Salle University by just nine points, 71-62.

The Fordham women’s basketball team still has eight A10 games scheduled, plus two games that were postponed in early January due to the rise in COVID-19 numbers.

Out the gate, shots from Asiah Dingle, Fordham College at Rose Hill (FCRH) ’22, and Megan Jonassen, FCRH ’22, showed promise for Fordham. The two Rams gave Fordham a three-point lead with seven minutes left in the first quarter. At this point, Dayton’s only shot was a three-pointer made by Erin Whalen, University of Dayton Graduate School (UDGS) ’23.

Dayton showed Fordham that this game would not be an easy one. Fordham’s main strength this season has been its defense, but the same could be said about Dayton. Against such an evenly matched opponent, the game was largely determined by shooting efficiency.
Dayton’s defense against Fordham only increased in intensity.
Fordham’s leading scorer, Anna DeWolfe, FCRH ’23, put up five points in the first. DeWolfe also contributed to the offensive strategy by assisting teammates instead of shooting difficult shots.

Two minutes into the second quarter, Downey had attempted to help her team, a foul gave Kyla Whitehead, UD ’22, two free throw shots that were made without hesitation. Dayton was gifted another free throw from Fordham after Whitehead’s shots. Dayton tightly held onto its 17-16 deficit from the Rams, for three minutes.

In those three minutes, Fordham faltered offensively, failing to find the net. Meanwhile, Dayton’s defense against Fordham only increased in intensity, as any shot attempted by the Rams was blocked by the Flyers.

Once those three minutes were up, Dayton put themselves in the lead. A missed jump shot from Dingle was rebounded by the Flyers and Marika Cook, UD ’24, broke the dry streak that both teams had on a fastbreak. After Cook’s shot, Whitehead laid down a three-pointer in the net. The Rams were falling behind Dayton by four points, 21-17.

As the quarter moved along, the Rams and the Flyers switched precedence as they constantly tried to hold a consistent lead over each other.

By the last minute in the second quarter, Dayton had a one-point lead, but DeWolfe received a rebound from Downey. DeWolfe sent the ball cleanly into the net from the three-point line. The quarter ended with Fordham in the lead by two points, 25-23.
The two teams continued their tango of who got to hold a one-point lead the longest.
Jenna Giacone, UDGS ’22, started the third quarter with a jump shot and leveled the scores at 25-25. Jonassen and Kendell Heremaia, Graduate School of Arts and Sciences (GSAS) ’23, made attempts to put the Rams in the lead again but failed to score.

The two teams continued their tango of who got to hold a one-point lead the longest.

With two minutes left in the third quarter, the Rams had earned nine points while Dayton only got one basket. A three-point shot from Matilda Flood, FCRH ’24, began Fordham’s expedition toward a successful quarter. Dayton helped Fordham increase their points through two opportunities for free throw shots given to the Rams’ best shooter, DeWolfe, who helped finish the quarter, 39-32.

The Rams continued their shooting miracles into the fourth quarter. Just 12 seconds in, Dingle made a three-pointer and the Rams were ahead by 10 points.

Efforts from Dayton’s starting five caused a shift with the last two minutes of play. The tides turned in favor of Dayton. With 41 seconds left, Cook brought the teams to an equal score of 48-48. But two fouls by DeWolfe gave Fordham its second A10 loss of the season as Dayton brought their score up to 52, losing the game, 52-48.

Fordham’s next game is against Saint Joseph’s University at the Rose Hill Gymnasium on Jan. 26. Currently, the Saint Joseph Hawks stand at 6-10 in the season.