After closing its doors in summer 2021 to reinvent the menu, Galioto’s Delicatessen unveils its new food and family-centric mission 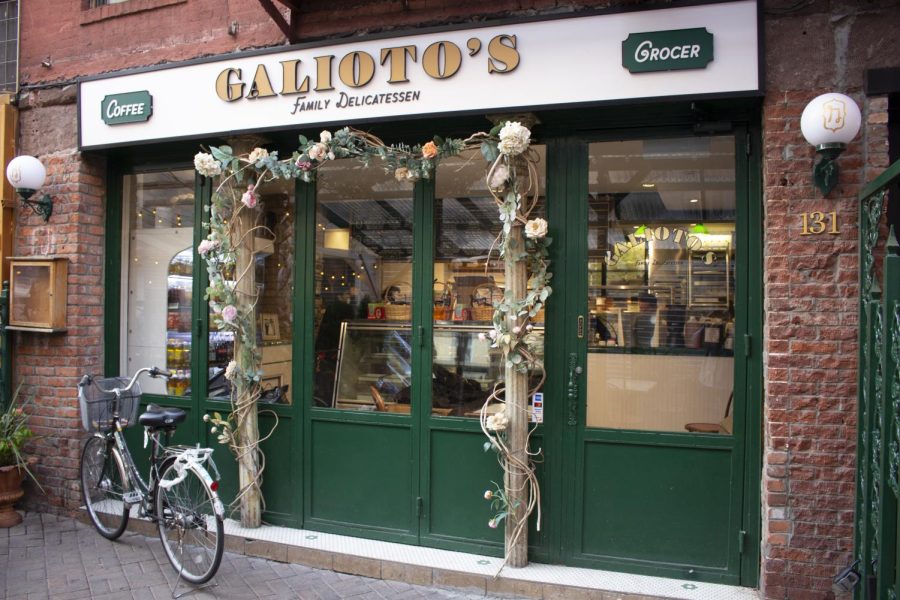 Nestled into the heart of Mulberry Street — a sprawling scene of tourists and Italian cuisine — Galioto’s Delicatessen reopened with a renovated menu and a renewed mission to foster community in NYC’s ever-changing Little Italy.

The innovative, fully plant-based Italian deli is the only of its kind in New York City. What is now a fully operational grab-and-go restaurant serving hot food and coffee, with a small Italian pantry, started with an idea between two half-siblings: Nicole Galioto and Nima Garos.

Galioto is a 22-year-old student in her final year at Boston University (BU), studying journalism and art history. She got her start in the hospitality industry through connections made in her family, which has been working in restaurants since 2008.

Her counterpart, Garos, is 40 years old and began his restaurant career with the opening of Gelso and Grand — an Italian eatery on Grand Street — in 2015.

The deli’s mission is not to make non-vegan food vegan, according to Galioto, but to repurpose beans, fruits and vegetables to make authentic Italian dishes lighter.

“We do not use the word ‘vegan’ because we do not want to scare people off, and we do not want people to see the word vegan and think it is not for them,” she said. “We want the space to be inviting and warm so all sorts of people can come in.”
The Closure of the Deli and the Pursuit of New Inspiration
The deli first opened in September 2020 and due to the pandemic, Garos said they faced difficulties with staff retention. In August 2021, they decided to temporarily close and take the opportunity to hire new staff members and a new chef — Mario Buccellati.

Mario Buccellati grew up in an Italian-American family in the suburbs of New York. He quickly developed a palette for Italian cuisine through restaurant visits with his parents and eating the cooking of his grandmother, Maria Pia Buccellati, who grew up in Recanati, Italy. Her recipes were published by the New York Times in 1970.

During the early years of his career, Mario Buccellati worked in fast-food restaurants, food trucks and Japanese izakayas.
“I am bringing what I learned in Italy to the deli.” Mario Buccellati, chef
His fascination with Italian cuisine and plant-based food led him to depart for Lucca, Italy in 2019 to study handmade, plant-based food at Gioia Di Vivere Cooking School.

“I learned about sauces, seitan and different ways to prepare plant-based meats and cheeses,” he said. “I am bringing what I learned in Italy to the deli.”

When developing plant-based meat and dairy alternatives, Mario Buccellati said taste and texture are crucial, and one is often sacrificed for the other. Instead of relying on name brands, he made his own varieties of plant-based smoked provolone, mozzarella, calamari, smoked ham and chicken cutlets for the deli that he believes perfected both factors.

Mario Buccellati said he had two hopes for the deli’s reopening: to bring in customers from outside the community and provide an in-neighborhood option for those looking for plant-based options without having to travel too far.

Maintaining and Breaking Tradition in Little Italy
Above the pantry shelves and along the walls of the deli, family portraits are hung to show customers the history of the Galioto family.

Galioto and Garos were immersed in the restaurant industry from an early age. Their mother is a co-owner of the Italian restaurant Da Gennaro, a more traditional Italian eatery located directly next door to Galioto’s Delicatessen.

“My mom and aunt are still there daily, every day of the year,” Garos said. “They manage it themselves.”

The deli is designed to invite the everyday customer in addition to the tourist, according to Garos. While many local businesses in Little Italy do not open until 11 a.m. or 12 p.m., Galioto’s Delicatessen is open at 9 a.m. daily.

Garos said he hopes the store’s adjusted hours and its coffee program, Nueva York, will entice customers to make the deli a morning routine.

Garos has been immersed in the Little Italy community since he was four years old. He has seen Mulberry Street transform from a local scene to a neighborhood dependent on tourism.

As part of the redesign of the storefront, the service counter is closer to the door, so the first thing customers will see when they enter is an employee “with a smile and a friendly hello to make you feel welcomed,” according to Garos.

Galioto said she wants the deli to be representative of her grandmother — who is the inspiration behind the store’s logo — and transform the ambience of the deli into a place that makes you feel warm and happy — “like how grandmothers make you feel,” she said.

Honoring the legacy of her grandmother, Galioto is establishing connections with other women-led businesses in the neighborhood, such as Cafe Belle, which sells desserts at the deli. Galioto said working with Noelle Scala, the owner of Cafe Belle, has been an empowering experience.

The little moments of meeting new people, such as Scala, have been a saving grace for her, Galioto said — especially during the pandemic.
“I am excited that Galioto’s is going to be this shining light in Little Italy where everyone can come and eat.” Mario Buccellati
“Returning to the intimate, personal model of business is really important to me. I could not think of anything I care more about than connecting with the people that come in,” she said. “The business is based on my family, so it is personal to me.”

By prioritizing a community-based model of business and establishing relationships with customers instead of a mass consumerist approach, Galioto said she hopes to create an environment where people can pick up food together and eat outside.

The team, according to Garos, always wanted the deli to stand out and be a “unicorn” of New York, and the ability to close the storefront to perfect their menu provided them the opportunity they needed.

“The plant-based items bring us to life. Even our more indulgent sandwiches are lighter on our digestive systems,” Buccellati said. “I am excited that Galioto’s is going to be this shining light in Little Italy where everyone can come and eat.”

The deli had its grand opening on Dec. 9, and Galioto said she hopes people feel the renovations, new menu and rejuvenated mission were worth the wait.