‘The Power of the Dog’: An Identity Crisis in the American Frontier 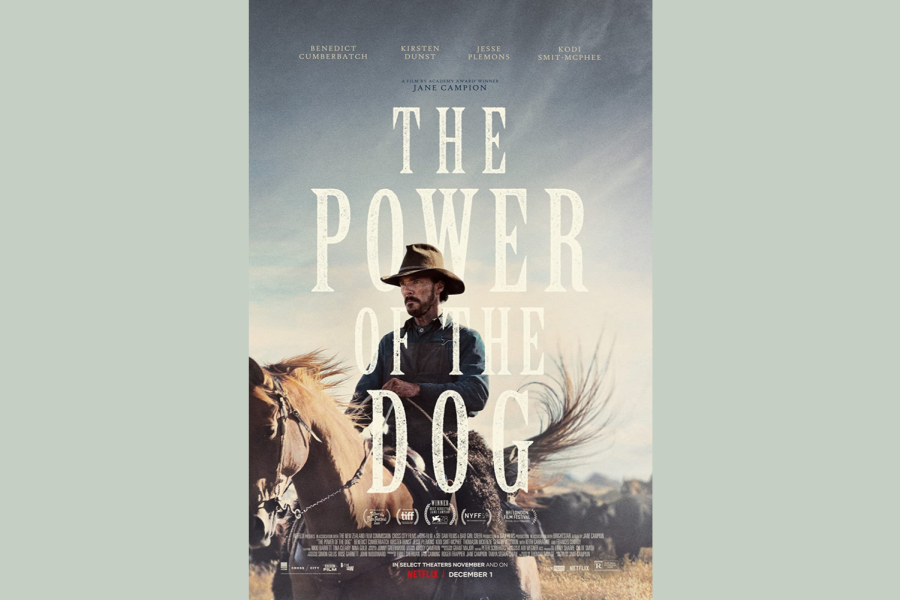 "The Power of the Dog" is a leading candidate for Oscars such as Best Picture.

The months of November and December annually mark the peak in the quality of film releases as major studios release their Oscar hopefuls. With so many new films released in the last couple of weeks, it can be difficult to pick one to watch from the bunch. Make no mistake, “The Power of the Dog,” released on Netflix on Dec. 1, is a must-watch for anyone who watches the Oscars as it will dominate in total Oscar nominations and is sure to come up in awards conversations.

In a surprising twist, this western focuses primarily on the relationships of the characters instead of the action, making the film more meaningful and, ironically, more intense than if it relied on western staples like violence and fights. The combination of the costumes and film score blend together to bring the pressure each character feels to live up to socially constructed gender personalities and roles.

The costumes provide insight to the characters, often reflecting their insecurities. From the very first shot of Phil, the story’s central figure, he drips of masculinity with his greased back hair, spurs, fur pants and overalls. He has a grittiness and impenetrability to him that makes him domineer and cower over others, radiating the harshness that was associated with men during that time period.

Phil’s appearance is in stark contrast to his brother George who wears suits, bowties and top hats, representing his professionalism and intelligence. Peter, who strikes up an unexpected bond with Phil, represents everything that Phil isn’t: feminine, sensitive and physically weak, coming off as harmless and innocent. This is heightened by the sun hats and loose, short clothing he wears. The costume design choices put preconceived notions in the minds of the audience about who these characters are and what they are capable of. To avoid ruining the ending act, I will leave you with this: looks can be deceiving.

Adding to the tension is a haunting but beautiful score by Jonny Greenwood, composed solely of string instruments and a piano. Subtle changes in the keys and tempo create an unnerving ambience, amplifying how characters like Phil and Rose are struggling with their identities.

Look for “The Power of the Dog” to be in the spotlight during the Oscars season, as it is one of the leading candidates for Best Picture because of its critiques on what power, strength and masculinity look like. Categories like Best Adapted Screenplay and Best Original Score are also surefire bets, and don’t be surprised to see the film earn several acting nominations.
“The Power of the Dog” is a reminder to stay true to yourself.
Cumberbatch is a front runner for Best Actor for his dark and tragic portrayal of Phil Burbank. Any scene with him is a treat, as he fully embraced his role as a villain, which is very different from the roles that viewers are used to seeing him play like Doctor Strange in the Marvel Cinematic Universe.

Smit-McPhee is on track to earn his first Oscar nomination for Best Supporting Actor for his role as Peter. His mannerisms and tone illuminate Peter’s sensitivity and uneasiness toward the society of macho men he is becoming a part of. Finally, Dunst is one of the leading candidates for Best Supporting Actress for her portrayal of Rose Gordon. Through Dunst’s facial expressions and line delivery, Rose’s spiral into a descent of madness and alcoholism is mentally draining to watch.

Ultimately, “The Power of the Dog” is a reminder to stay true to yourself. Your identity is your own, not a social construct. Embrace it and choose who you want to be.