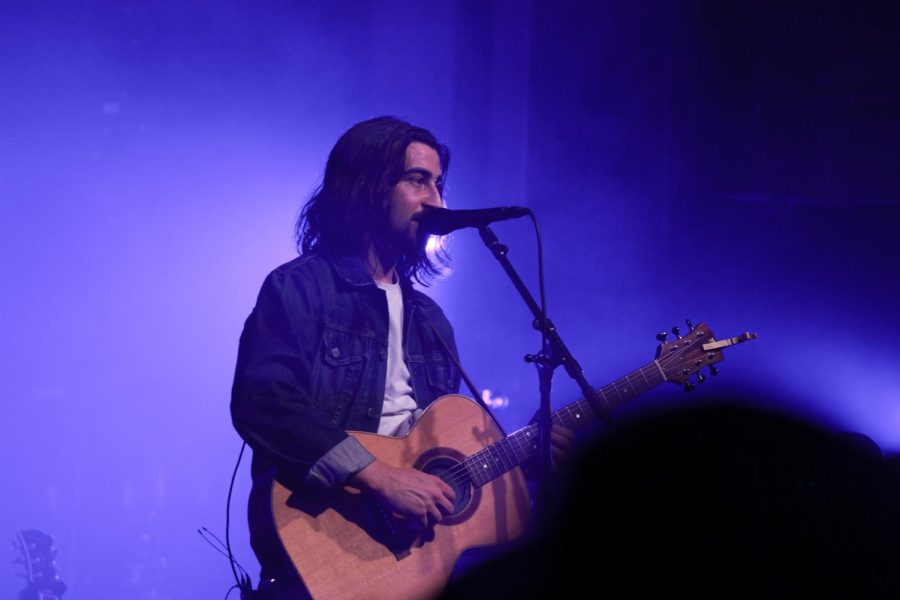 Throughout his journey from SoundCloud to sold-out shows, singer-songwriter Noah Kahan has stayed true to himself and connected deeply with his fans. This November, he brought his authentic stage presence and storytelling to New York City for two shows at Webster Hall.

The concerts, which took place on Nov. 11 and 12, were part of the first leg of Kahan’s “I Was/I Am” tour. The tour follows the release of Kahan’s second album, which debuted in early September and explores his personal and career growth.

Prior to Kahan’s emergence on stage, Australian singer Blake Rose livened the growing crowd. Rose started the night with “Rollerblades” off of his latest album, and continued moving through a repertoire of upbeat songs and more somber, acoustic pieces.

Midway through his set, Rose took out his Polaroid camera to snap a picture of the crowd as he’s done for each venue on tour. Following Rose’s performance, the crowd in Webster Hall swelled with anticipation for the headlining artist.
Kahan’s casual stage presence was inseparable from the energy he created in concert and the music he plays.
Kahan entered the stage in complete darkness before opening his set with a few verses from “Troubled Mind” off of his “Cape Elizabeth” EP. Fans cheered for the folk-pop artist, and many forwent taking out their phones, choosing to immerse themselves in the unique energy Kahan created in the space.

In the spirit of “I Was/I Am,” Kahan’s setlist consisted of a blend of his older music along with popular tracks off of his latest album. Throughout the show, he sipped a White Claw on stage and candidly shared with fans how exciting it was to be in New York, the city he called home before moving back to Vermont at the start of the pandemic.

Kahan’s casual stage presence was inseparable from the energy he created in concert and the music he plays, as his vulnerability with fans has characterized his style as an artist.
“To hear music, not only music that I enjoy, but to hear an artist being willing to talk candidly about these issues makes you feel less alone.” Olive Fox, FCLC ’23
Olive Fox, Fordham College at Lincoln Center ’23, attended Kahan’s November 11 concert and said his vulnerability as an artist is part of what she appreciates most as a fan.

“As a person with depression and anxiety, hearing celebrities talk about mental illness reduces some of the stigma. To hear music, not only music that I enjoy, but to hear an artist being willing to talk candidly about these issues makes you feel less alone,” Fox said.

Kahan uses his music to express parts of himself he’s struggled with in the past. He said he is happy whenever listeners are impacted by his own stories.

“The effects of writing music about what I’m feeling and these kind of dark feelings that I have, I’ve seen that affect people really positively,” Kahan said. “I was shocked to see that so many people were going through the same thing as me. It made me feel a little less alone in that turbulence of being a young person in a new world, in a new city.”

The night was made special in other ways when halfway through his set, Kahan brought out singer Chelsea Cutler to perform an acoustic version of their duet, “Crazier Things.” Fans cheered loudly for Cutler, and an electrifying energy arose as the crowd sang the lyrics “drinks in New York City” along with the two singers. This particular energy was what Kahan had hoped for when writing tracks for “I Was/I Am.” As the album was composed throughout the pandemic, Kahan tried to write songs that would create a dynamic energy when performed in person.

“It’s amazing because I released two projects during the pandemic, and I just had no idea what people thought of them besides what I saw online,” he said. “Going to these shows and hearing people sing every word, and kind of chant the words back to me, and really feel these new songs have made me feel very vindicated in writing them.”
“The pandemic allowed me to really think about the bigger picture, and I hope I can hold to some of that perspective because I don’t want to feel like I’m stalling my growth.” Noah Kahan, singer-songwriter
Kahan closed his set with “Godlight,” sung in the glowing light of his circular backdrop. The song refers to the “godlight” aimed at a performer on stage, something Kahan has become familiar with as an artist. More specifically, the song is a reflection on how being in the spotlight has changed him throughout the years.

Shortly after exiting the stage, Kahan came back on for an encore and played three of his most popular tracks. The crowd grew in volume, culminating as everyone sang “Young Blood,” yet another song in which Kahan explores how his rise to fame has impacted his outlook on life.

As Kahan looks ahead to the second leg of his tour and his career beyond it, he said he hopes to continue growing personally and maintain a fan base that is willing to grow with him.

“The pandemic allowed me to really think about the bigger picture, and I hope I can hold to some of that perspective because I don’t want to feel like I’m stalling my growth,” said Kahan. “I think that I’m going to be trying to experiment musically and kind of expand on different parts of my life, and different parts of my life musically too, and I hope people are down for the ride.”