Individuals Shouldn’t Be Held Responsible for Protecting the Environment

Corporations and wealthy individuals have caused environmental degradation, but individuals are told that they need to solve the climate crisis alone 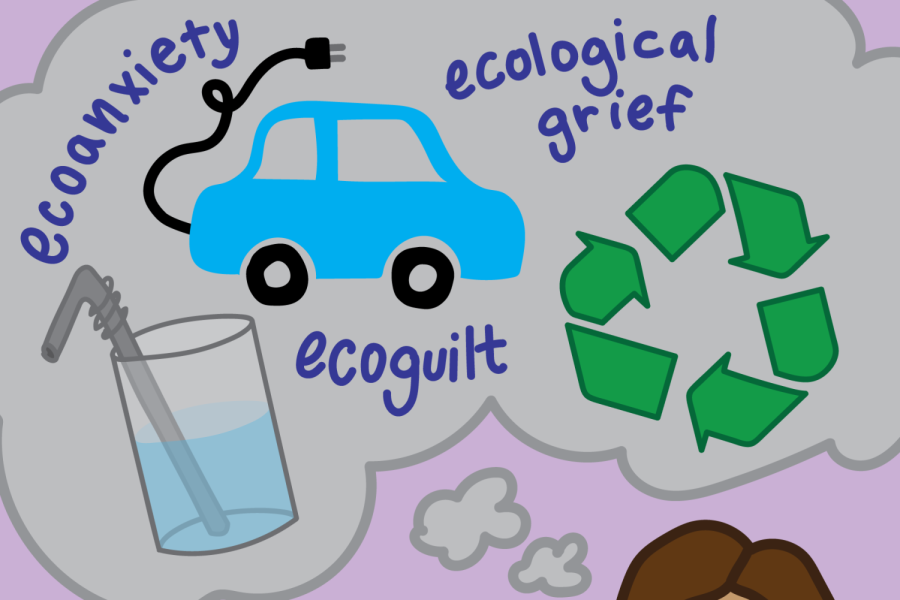 Ecological guilt should belong to corporations, not individuals.

With environmentalists and concerned citizens alike reeling from the compromises at the recent COP26 summit, climate change is at the forefront of our minds.

News clips highlighting dramatic climate protests shared on Instagram follow ads for bamboo paper towels that are more “sustainable” than (and twice the price of) regular paper towels. Meanwhile, on the streets, posters for brands like H&M proudly promote “green” or “conscious” fashion styles and compete for consumers’ attention with seasonal Starbucks signs, beckoning them in with promises of lids that eliminate the use of straws.

We are surrounded by calls for climate action, but we rarely question the hypocrisy of the calls coming from those responsible for polluting most: corporations.

According to a Pew Research Center report from May of this year, two-thirds of respondents, representing the U.S. adult population, believed that ordinary Americans were not doing enough to reduce their contribution to climate change; nearly half said that they themselves were not doing enough, either.

Everyday consumers are scorned if they don’t recycle, drive an electric car, or carry around a set of reusable straws. These are all great practices to adopt into your lifestyle, but it’s not the average person who is responsible for spilling oil into the oceans or selecting less sustainable materials for the sake of profit. So, why do calls to be “greener” always fall on us?

Keep America Beautiful initially drew widespread support from environmental groups, and by the late 1960s, mainstream society was becoming more concerned with environmental pollution and overpopulation. In response, Keep America Beautiful broadened its focus from only litter to other aspects of the environment, like clean air, safe water and environmental preservation, through “The Crying Indian,” an ad released by the Ad Council in 1970 that fully shifted the blame from corporations to individuals through a complex use of guilt and pathos.

The premise of the minute-long video is simple, following the path of a Native American man taking in scenes of litter along a highway. The emotional aspect comes in as the camera zooms in on the pained expression on his face and the single tear rolling down his cheek, the detail that individuals pinpoint as the reason for their feelings of guilt and responsibility.

Today, companies are still benefiting from this campaign, which currently remains in existence even though many environmental groups split from Keep America Beautiful in the mid-1970s when the organization fought regulations protecting the environment.

Many companies in the fashion industry, like the aforementioned H&M, Zara and Uniqlo, have been criticized for unsustainable practices (mostly related to fast fashion and cheap materials). Their solution: “greenwashing” their products — marketing their clothes as “sustainable” and “conscious” while obscuring the non-eco-friendly methods used to produce said products — so they can play into consumers’ desire to act responsibly for the environment. By shopping “green,” individuals can still buy easily replaceable products without the guilt associated with engaging in practices that pollute the environment.

Often, the most accessible and convenient products are those produced by large, polluting companies. It can be difficult to seek out green brands and stores. Take the Package Free Shop located on Grand Street in Brooklyn: Though the store boasts its environmentally friendly mission of zero packaging waste for basics like soap, detergent and other household staples, the price is much steeper than what many can afford. A bottle of “Natural Refillable Shampoo” costs $32, for example.

“Greener” brands still prioritize making a profit off of consumers, knowing that many customers will pay a higher price to “support” the environment. For them — like many large, polluting corporations — there’s no monetary incentive to be green; individuals who can afford the hefty price tag associated with green products will pay the requested amount, while those who cannot or do not want to be subject to those expenses are left with no other choice than to turn to less sustainable, single-use commodities.

Large corporations also use upsetting psychological tactics to shift the environmental blame onto individuals. Take bp’s Target Neutral campaign, for example: On one page, readers are informed that “Many of us want to take action on our lifestyle carbon emissions but don’t know where to start. To help we’ve developed a lifestyle carbon calculator that can help you work out your carbon emissions across your travel, home energy, food choices and the stuff you buy.”

The calculator, which brings readers to a short quiz requesting information like how many hours you spend in a personal car per week or how much of your home’s energy comes from renewable sources. At the end, participants are confronted with (and usually scorned for) how their personal footprint ranks with global emissions and are encouraged to take a personal “pledge” to turn their thermostats down by one degree or only fly on renewable flights through cute infographics.
Terms like “ecoanxiety,” “ecoguilt” and “ecological grief” have made their way into the lexicon of published medical articles relating to mental health.
These pledges are silly and unreasonable to expect from individuals, especially when the large-scale infrastructure needed to permanently help individuals lower their emissions is lacking. They unfairly place the burden of decreasing emissions onto individuals when the power to enact change lies only with the company sponsoring the questionnaire.

For those who lack the time, money or energy to decrease their effect on the environment through altering their habits, being made to feel like they cannot do anything meaningful to help halt environmental degradation can take a toll on their mental health. Terms like “ecoanxiety,” “ecoguilt” and “ecological grief” have made their way into the lexicon of published medical articles relating to mental health, according to a systematic review of medical literature consolidated by Frontiers in 2019 demonstrating the increased link between climate change and people living with mental health illnesses.

More recently, a survey of over 10,000 respondents from 10 countries released in September of 2021 found that climate change causes widespread anxiety — nearly half of those surveyed said that their climate-related fears negatively affected their daily life. Worries about the environment permeate our everyday lives, and much of the blame for feeling so responsible and guilty for changes outside of our control can be traced back to large corporations.
We alone cannot solve climate change, nor is it entirely of our own doing.
Furthermore, the groups who are most likely to be affected by both changes to the climate and the resulting mental health challenges are racial minorities, according to the EPA. They live in places more likely to be struck by natural disasters and often have longer recovery times than white people. Not only are racial minorities more vulnerable to climate change, but they are also less at fault — white, older males usually constitute the ranks of the wealthy and large corporations, or those most responsible for climate devastation, while those leading the climate charge are usually younger and people of color, contrary to popular beliefs that minorities do not care about environmentalism.

I’m not advocating for you to stop bringing your reusable cup and straw to Starbucks or to completely boycott greenwashing brands like H&M; you should continue to incorporate eco-conscious habits into your life because individual actions do still matter.

But we alone cannot solve climate change, nor is it entirely of our own doing.

It’s not right that individuals are made to feel responsible for a problem largely perpetuated by corporations and the wealthy, especially when that responsibility is beginning to infringe upon our mental health.

At the end of the day, it doesn’t matter if individuals engage in eco-conscious actions: The pollution exerted by corporations and wealthy individuals is so much greater than that of average citizens. If we want real change to occur, then that starts with regulating companies and holding those with the power to implement change responsible — not blaming individuals. And as much as we would all like to wish climate change away by tossing a coin into a fountain, actual change looks more like substantial laws, regulations and pledges for climate initiatives by corporations and the wealthy. This isn’t a problem we can solve individually.