Receiving 1,488 signatures, the petition sought to extend the pass/fail deadline in light of the pandemic 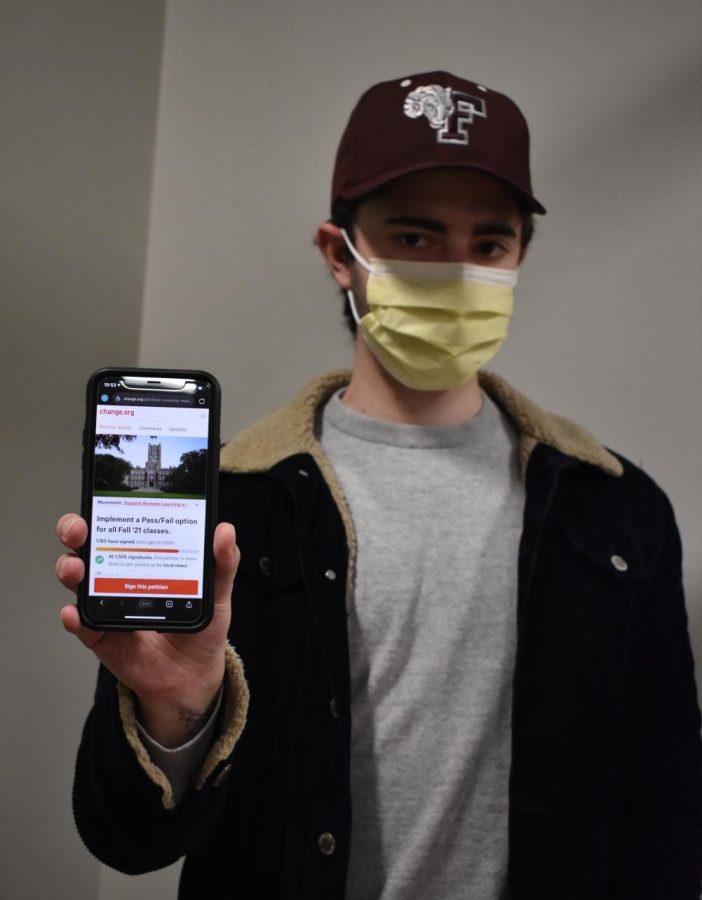 John Lonie created the petition to extend the pass/fail option to help students handle the transition from online to in-person classes this semester.

After a year of online and hybrid learning models, Fordham held a fully in-person fall 2021 semester. Students concerned about this transition created a petition on Change.org for the extension of the pass/fail option until the end of the fall semester. The petition, despite accumulating 1,488 signatures as of Dec. 9, was rejected on Dec. 3 in an email from the deans at Fordham College at Lincoln Center (FCLC).

The petition highlights the difficult transition back to in-person learning, with online learning leaving students unprepared and overwhelmed. In light of these factors, it concludes that it would be inadvisable to maintain pre-pandemic grading and attendance policies.

John Lonie, FCLC ’22, said that he and some friends created the petition in mid-October after hearing from multiple students that they were feeling very stressed and anxious about COVID-19 exposure in classes.

“A lot of people (were) experiencing social anxiety, worry about contracting the virus in school (and) a lot of health issues as well,” he said.

Lonie expressed that he understands the pass/fail option is only a temporary solution and recommends that the university work on implementing long-term measures to help students succeed. He advocated for the expansion of counseling services so that all students can receive the help they need.

The petition is only calling for this option to be created for the fall semester, as the creators believe that students will be adjusted and able to better handle in-person classes in the spring.

In the email stating the deans’ decision, Laura Auricchio, dean of FCLC, informed the student body: “the University has decided it would be both unfair and detrimental to our students to alter the P/F policy at this late point in the semester.”

The first reason that Auricchio gave for this decision was that many students had already chosen to withdraw from classes rather than receive a low letter grade. She explained that if they were to introduce the pass/fail option now, those students would be upset.

Auricchio also noted that when the option was created in the spring, Fordham was able to do so because so many universities were extending the option to their students. As there is no widespread pass/fail option occurring now, the deans explained that it would place “students at a disadvantage in applications to law schools, medical schools and other competitive post-graduate endeavors.”
Both the pass/fail and withdrawal without failing grade deadlines would be extended until April 22 for the spring 2022 semester.
In response to this reason, Lonie said that he believes anyone can understand that the transitional period from online to in-person learning was difficult for people. Lonie asked for students who may not need the pass/fail option to “support us in a compassionate way” by understanding the outside pressures that some students have.

The deans’ email recognized the traction the petition gathered, which was reflective of a strong desire among Fordham students for “greater flexibility in grading options” and announced that both the pass/fail and withdrawal without failing grade deadlines would be extended until April 22 for the spring 2022 semester.

Following the deans’ statement, organizers of the petition released an update requesting that the university reverse its decision. They also addressed some of the deans’ reasons for not offering the pass/fail option. The organizers noted the presence of the omicron variant in NYC and student support for the petition as reasons to implement the policy. The update also appealed for leniency in the university’s grading policy as the semester concludes.

The addendum to the petition concluded with an appeal to Fordham’s Jesuit values: “Care for the whole student. Implement our request.”