In a survey circulated by The Observer, many students said they were unaware of the resources available to them 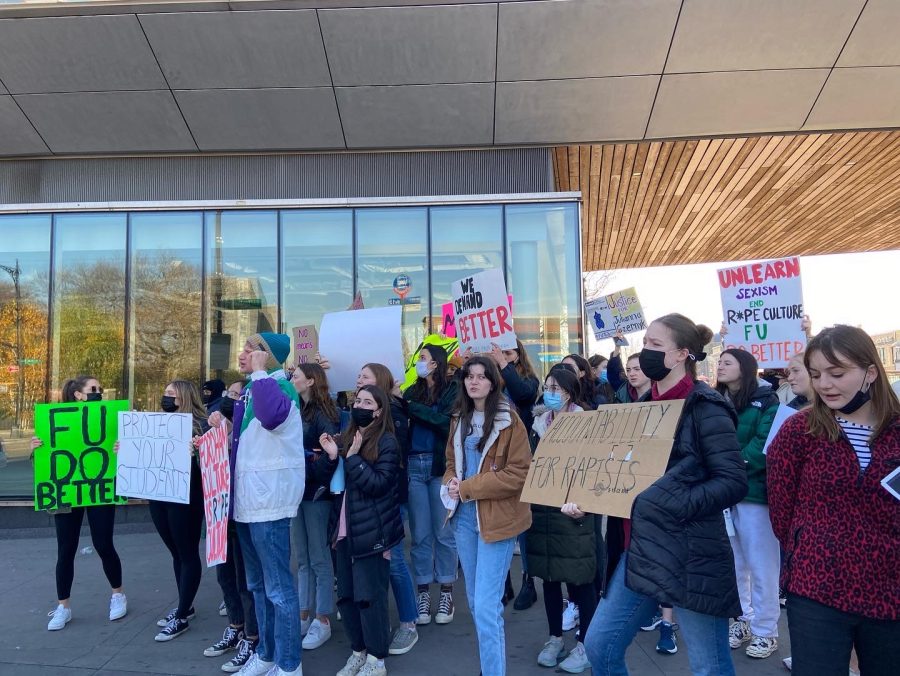 After two instances of Fordham mishandling sexual assault allegations, a rally was held on Dec. 4 in the Bronx which was organized by the Instagram account @fu.dobetter.

Throughout the fall 2021 semester, The Observer conducted a survey on student experiences with reporting cases of sexual misconduct to various departments within the university. The survey began circulating on Oct. 12 and submissions were kept completely anonymous. The survey received 31 responses.

Fordham defines sexual assault as “physical sexual acts against another person that include vaginal, anal or oral sexual intercourse with another person, touching sexual or intimate parts of another person, or inserting a foreign object, however slight, into any sexual or intimate parts of another person.” The university also defines sexual harassment as any unwelcome conduct of a sexual nature, including but not limited to “sexual advances, requests for sexual favors, and other verbal or physical conduct of a sexual nature.”
Orientation for first-year and transfer students and floor meetings for residents are expected to include an overview of available resources.
Lack of Awareness of Resources Available
In the survey, students were asked if they utilized resources provided by Fordham when reporting cases of sexual and related misconduct. Several students noted that they were unaware of the resources available to them and did not know the steps they could take to report cases of sexual misconduct or how to ask for assistance.

“Until the survey asked me this just now, I didn’t even know that I could report this incident to public safety and there would be a reason/action,” an anonymous student said.

Jenifer Campbell, dean of students, discussed options available to students as well as information regarding access to resources. According to Campbell, orientation for first-year and transfer students and floor meetings for residents are expected to include an overview of available resources. Additionally, she mentioned that there are incidental meetings offered by clubs in the student involvement area that talk about sexual misconduct and resources available.

Starting from Nov. 15, the Gender Equity and Title IX Coordinator, Division of Student Affairs, and Department of Public Safety began circulating a Sexual and Related Misconduct Campus Climate Survey. Campbell said the survey is meant as a benchmark for the administration to get a feel for how much students know about the resources available to them and an idea on student experience with Title IX and sexual misconduct.

“As much as we can in terms of being resources and getting the information to all students so they can be a resource to those individuals who may not be aware of what’s available to them in terms of support, I think it (the survey) just helps us overall in making certain that everyone has what they need in terms of information and know where they can go if they have a situation,” Campbell said.

The email in which the university’s survey was sent linked additional information and a guide for Fordham students. In Fordham’s policy statement regarding sexual and related misconduct, the university pledges to maintain a community where members are in an environment that is free from all sex and gender-based discrimination.
“What I know of the Title IX rules is that they are rigid and rightfully need a lot of evidence but it is easier for me to try to forget the whole incident than to go through all the procedures because I don’t think that will help me feel better.” anonymous student respondent
Reporting to Title IX and Public Safety
Three students who responded to the survey stated that a reason they chose not to report sexual misconduct was due to the fear of having to retell their story multiple times. Students expressed that reporting seemed like it would be worse for their mental health as they would have to keep remembering the event.

“What I know of the Title IX rules is that they are rigid and rightfully need a lot of evidence but it is easier for me to try to forget the whole incident than to go through all the procedures because I don’t think that will help me feel better,” an anonymous student said about their decision not to report to the Title IX coordinator.

Other students echoed this concern of reporting making the situation more difficult.

“It also seems like too much hassle and mental drain to me for it to be anywhere near worth it,” another anonymous student said about choosing not to report to Public Safety.
“We try at all ends to stop individuals from having to tell their stories more than one time to any individuals on campus.” Jenifer Campbell, dean of students
Campbell explained that this is something the university considers with their protocols. When training Resident Assistants to be mandatory reporters, Campbell noted that they are taught to get minimal information. This is so that the individual does not have to retell their story multiple times, as they will have to tell it to Public Safety if they chose to make a report.

“We try at all ends to stop individuals from having to tell their stories more than one time to any individuals on campus,” Campbell said.

One student noted that their experience with their counselor was positive, but when they initially called CPS, that was not the case.

“When I had initially told her that I did not want to give her my name (I) just wanted to call and find out what my options were, she got very annoyed with me,” they said.

One student also mentioned their concern over the number of steps needed to file a report.

“It seems like more work to me to dwell on it,” another anonymous student said.

CPS did not respond to The Observer’s request for comment.
“We figured that a real life action would be best to increase visibility and usher a response from the university.” Ellen Sweeney, FCRH ’23
Fordham Student Response
Fordham has been receiving more attention regarding its alleged failings to address sexual assault and harassment complaints during the fall 2021 semester. A new Instagram account called fu.dobetter was created by three juniors at Fordham College at Rose Hill (FCRH). Ellen Sweeney, Maddie Newall and Hannah Quinn, made the account and organized a rally a week later to take a stand against sexual misconduct at Fordham. The rally took place on Fordham Plaza on Dec. 4 in the Bronx following two reports of Fordham mishandling allegations of sexual assault.

“We figured that a real life action would be best to increase visibility and usher a response from the university,” Sweeney said.

The first lawsuit came from allegations of Fordham covering up sexual assault allegations against a former student. In the second lawsuit, a Fordham student called Fordham’s decision to find her alleged rapist not liable, “clearly biased and unsupported by the testimony and evidence it had discovered.”

Newall explained that after starting the Instagram account, they also realized how many students related to the issue.

“We kind of realized how much the issue resonated with students at Fordham so then that was a bigger catalyst for really wanting to do this,” Newall said.

Sweeney, Newall and Quinn created an anonymous Google form for students to share their thoughts regarding Fordham’s response to sexual misconduct and their experience with the resources available at Fordham in order to get an idea of what was wrong and what needed to change.

One aspect that the anonymous Google form indicated needed changing was with counseling services. The form revealed issues with CPS and how they handle cases.

“People were saying there were issues with CPS and how they handled victims cases in an inexperienced way that they gave responses you would not want from a psychological counselor,” Sweeney said.

The organizers stated that the anonymous Google form also revealed that many students found the investigative process unclear. Very few people said the process made them feel better or that the accused were punished in any way.

Quinn said that many students noted they were upset because the Title IX office does not provide a way for students to give feedback regarding their experiences.

“I feel like there is a pretty general distrust of the processes of Title IX at Fordham, just from hearsay or people not wanting to go through with it because it is scary,” Quinn said.
“This is a pervasive problem across all grades and in all parts of the university which shows there is an underlying culture of sexual misconduct.” Ellen Sweeney
Sweeney noted that there is not one factor that can be blamed for sexual misconduct on Fordham’s campuses.

“All the incidents we know about are isolated and unrelated to each other but that shows us that this is a pervasive problem across all grades and in all parts of the university which shows there is an underlying culture of sexual misconduct,” Sweeney said.

Newall noted that Bob Howe, vice president for communications, responded to News12, stating that the premise of the strike was not true and that Fordham has a “robust and fair Title IX and sexual misconduct policies and procedures developed in compliance with relevant state and federal laws.” The organizers did not receive any communication from the university themselves.

Howe did not respond to The Observer’s request for comment.

Available Resources
In the Student Life section of the Fordham website, the Caring for Students tab contains resources available to students and Campus Assault and Relationship Education (CARE). Under this tab, Fordham states that the university responds to all sexual and related misconduct incidents with a trained response team. Students can contact Public Safety, the dean of students, the Title IX coordinator, the associate vice president for student affairs, the office of Residential Life, health services and counseling services. The office of human resources is also available as well as off-campus resources if needed.

If you or someone you know has been a victim of sexual assault or harassment, the following outside resources are available for consult: