‘Brecht on Brecht’: An Inclusive and Bold Take on Brechtian Theater 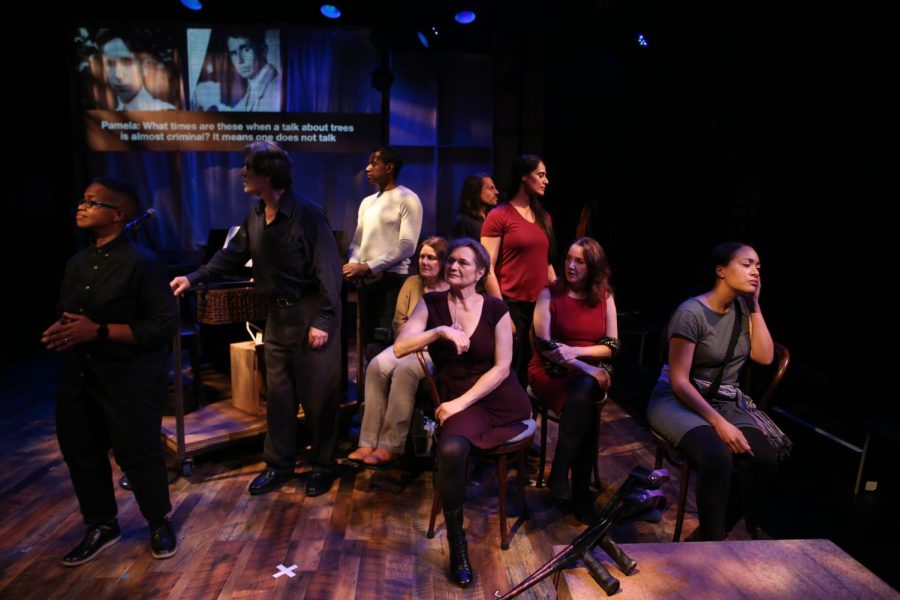 Whether you recognize it or not, Bertolt Brecht has always been one of the most influential and important pieces in the puzzle of the dramatic arts. His work stretches and grows through every wall like a root. It covers entire ideas and becomes the seed that gives birth to others, but even so, not many people seem to be aware of the power it holds. That’s not the case for the creators of “Brecht on Brecht.”

With a cast of nine actors who are constantly changing characters and personalities, “Brecht on Brecht” attempts to bring Brecht’s work to life in an odd yet, at times, fitting way.

“Brecht on Brecht,” which ran at the A.R.T. / New York Theatres until Nov. 20, started with a public warmup, something that didn’t seem planned and maybe wasn’t. As the audience entered the small space and sat down in their chairs, the nine performers stood in the middle of a small, purple-lit room singing, moving around, yawning and going on as if there wasn’t an audience watching them.
Through their performance, the cast gave the audience a chance to experience their version of Brechtian theater.
They spoke to the audience and among themselves about the mundane, which may seem completely out of the ordinary and even wrong, but that was the point. As the show began, each performer introduced themselves and detailed intimate aspects of their characters and physical appearances.

The cast — Fareeda Pyracha Ahmed, Scott Barton, Stephen Drabicki, Ann Flanigan, Anita Hollander, Dionne McClain-Freeney, Ann Marie Morelli, Pamela Sabaugh and Sean Phillips — created an environment of inclusion and warmth toward the audience and, through their performance, they gave the audience a chance to experience their version of Brechtian theater.

The organizers made sure to include clear details and even an online program with transcribed descriptions so that the audience could access their work even after they left the space. During the performance, the theater was made accessible for anyone with movement disabilities; a transcript of the spoken word projected onto the back wall for all of those with a hearing impairment, and there were vivid descriptions of location and clothing for the visually impaired.

In addition to their inclusive approach, the cast, crew and creators of the show immersed themselves into multiple aspects of Brecht’s life.

The play is dominated by what seem to be short vignettes depicting Brecht’s work. We hear some poetry, which is often introduced by one actor and recited by another. We listen to songs and experience short plays from Brecht’s endless repertoire of work, but in them wanting to include every aspect of the Brechtian style in their performance, the point may be a little lost. They jump from one section to the next quickly, which can be enticing but at times causes a gap in the understanding or appreciation of the play.

This piece aimed to do it all, and while they achieved a certain level of success, there was also a certain “hit or miss” feeling to it all. Maybe that was a part of the experience.

Brecht’s theater is known for its defamiliarization effect. In all of his work, there is a certain feeling of separation or confusion on stage, which naturally leads the audience to lose track of the piece or at times find themselves uninterested in the work. The fact that “Brecht on Brecht” was able to achieve a similar alienation shows a deep understanding of Brecht’s work.
If the intention of “Brecht on Brecht” was to replicate those feelings common in Brecht’s work, they succeeded, even if it involved a certain level of alienation from the audience.
The show is filled with references to Brecht’s influence in theater, to his style and to his form. It is tailored to people who know Brecht, so if you’re not familiar with his work, this show probably isn’t for you. Knowing where the performers are coming from and where the stylization and technique fit into Brecht’s style makes this performance enticing and enjoyable, but without the background information that holds this piece up, one may find themselves bored during the play. Yes, “Brecht on Brecht” aimed to be very inclusive of everyone, but in doing so, it fell short of including the members of the audience who may not have been as versed in Brecht’s work.

If the intention of “Brecht on Brecht” was to replicate those feelings common in Brecht’s work, they succeeded, even if it involved a certain level of alienation from the audience. Brecht’s influence in the theater is never-ending and ever-changing that continues even after his death 65 years ago.

But most of all, his work is something that can’t be measured in any sense. Adapting his work into a performance and attempting to include every inch of it on the stage is not an easy task. Kudos to those who dared to try.