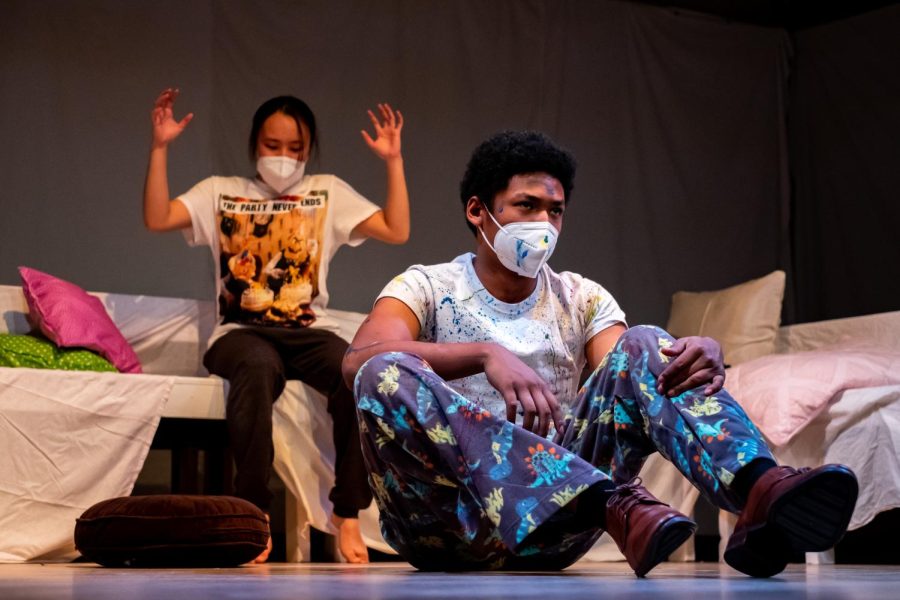 “The Pillowman,” a story with such dark themes, required the commitment from every member of the production to pull off a gripping work in such a powerful way. A dark work showcasing child abuse, police brutality and murder, “The Pillowman” made its debut on Nov. 11-13 in the Whitebox Theatre at Fordham Lincoln Center.

It tells the story of an author, Katurian, played by Aaron Dorelien, Fordham College at Lincoln Center (FCLC) ’24, who is being interrogated by the police about his gruesome writing on child murders that resemble real-life murder stories. The imagery of Katurian’s stories, presented in kaleidoscopic flashbacks, illustrates many gruesome stories of children getting murdered. We later learn that Katurian’s brother, Michal, played by Kana Seiki, FCLC ’24, was responsible for killing the children inspired by Katurian’s stories. Director Jayla Pollock, FCLC ’21, discussed some of the theatrical decisions she made and how they were inspired.

“The most important thing that I wanted to convey to the audience was the consequences for sharing more disturbing art,” Pollock said. “The play also brings up questions about systemic injustices when casting people of color in Katurian and Michal’s roles, but after the last couple of years we’ve had as a society, I chose not to focus directly on that aspect of the show as much.”
Pollock’s directorial choices acknowledged race-based traumatic experiences, instead of ignoring them completely.
The show touched on aspects of police brutality in the beginning act when Detective Ariel, played by Alexa Smith, was seen inflicting pain on Katurian.

One can argue that this show spreads awareness of systemic racism in the police system, but one must also consider that explicitly highlighting systematic racism exposes the audience to traumatic content that could have psychological repercussions.

Intimacy director and fight choreographer Zoë Lishinsky, FCLC ’22, played a role supporting the actors with taking on such heavy roles.

“As an actor myself, I wholeheartedly understand the detail and work that we put into our characters, and how it can take a toll on the mind and body if done unsafely,” Lishinsky said. “I wanted to create an open space where we checked in with our mind and body before and after each rehearsal period. I wanted to understand where everyone was at so that we didn’t push any limits.”

In the behind the scenes, Lishinsky would have choices between exercises that would help get their energy up. Practicing these exercises at the end of rehearsals helps the actors separate their characters from their personal lives. If the actors take their heavy work back to their personal lives, it has the potential to negatively impact their mental health.

Seiki and Dorelien experienced some challenges as they approached their characters’ scenes.
“I would go into his memory of torture as well as his love for his brother and all the stories he had told Michal, and let that change my physicality.” Kana Seiki, FCLC ’24
“Because of his (Michal) parents’ physical and emotional abuse he received as a child, Michal was a character I had to think about and learn in terms of his intellectual and physical, influenced by his past,” Seiki said.

Seiki talked about how she has done research on traumatic brain injury. Moreover, she discussed with her peers how Michal would connect with the outer world when he was isolated as a child.

“For Michal’s physicality, I worked from the inside out: I would go into his memory of torture as well as his love for his brother and all the stories he had told Michal, and let that change my physicality,” Seiki said.
Dorelien took inspiration from his childhood and personal life to spark some connection between him and Katurian.
Seiki not only explored her role’s physical qualities but connected them intellectually to how Michal would look at the world. She felt Michal was an innocent, pure being and wanted to convey the message of his childlike nature, despite the fact that he murdered multiple children.

Dorelien took inspiration from his childhood and personal life to spark some connection between him and Katurian.

“It was easy at first to put Katurian in this box of ‘this guy is bad’ but I had to find reasons to justify everything I did and why I did them,” Dorelien said.

One of many stories in “The Pillowman,” were inspired by the story of Jesus’s crucifixion also known as “The Little Jesus” which was one of Katurian’s darkest stories about a child getting crucified like Jesus. However, with storytelling Dorelien grew up hearing happier stories, and was not able to relate to his character in which Katurian told darker stories. “My mom used to tell me (much, much happier) stories all the time when I was little, and a lot of my storytelling attempted to emulate that and evoke that childlike feeling,” Dorelien wrote.
At the end of the show, the audience was able to catch a glimpse of Michal and Pillowman, and it became clear that Michal chose the path to live.
Part of being a theater actor is not only becoming your character but also learning to bring that character to life.

Toward the end of the play, Katurian was executed, and his only wish was to preserve his stories. But, naturally, as a writer, he didn’t want to just preserve his stories but write more. He thought of Michal, and before he can even think of the ending for Michal and his relationship with Pillowman — a creature that can travel back in time and tell children details of their horrible future — the trigger went off, and the ending wasn’t written.

At the end of the show, the audience was able to catch a glimpse of Michal and Pillowman, and it became clear that Michal chose the path to live. Pillowman knew of the miseries Michal would encounter. Yet, despite everything that Michal had gone through, he still wanted to live. I think Michal would like to believe that Katurian would be his Pillowman, and it would be his stories that would change the ending of his life story, or even perhaps his whole life. That is my personal interpretation, and I trust that the audience can build their own interpretation of the tragic story of the strong bond between two brothers and their love of storytelling.

The performances of these talented actors and the hard work that was done behind the scenes, conducted by Lishinsky and Pollock got me sitting on the edge of my seat. Notably, the work that these actors put into their characters translated the cruelty that Katurian and Michal went through. The actors portrayed that the world isn’t black and white, rather, it is filled with scribbles of colors.