Rams compete against national powerhouse Baylor and others in nonconference showcase 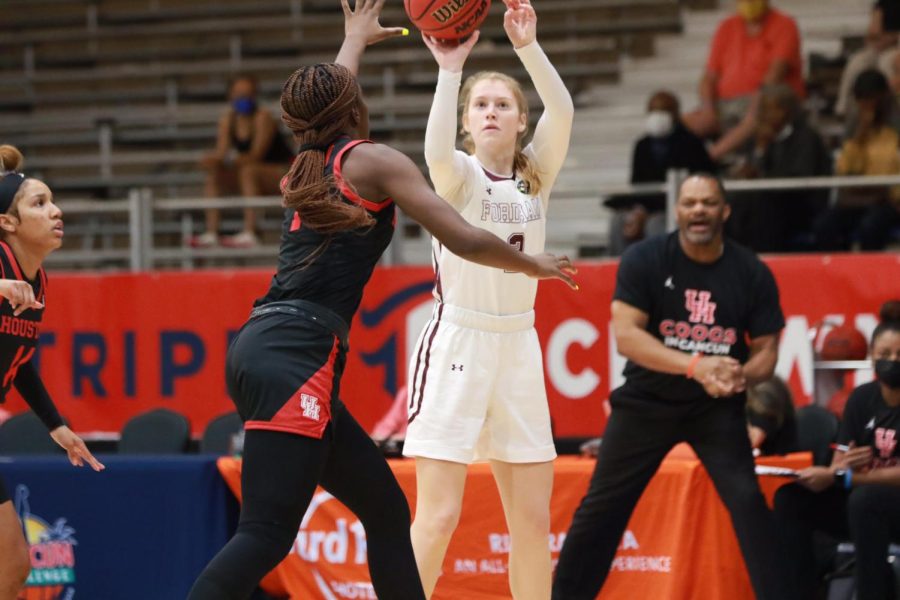 By PATRICK MOQUIN and GABRIELLA BERMUDEZ

The Fordham women’s basketball team completed its run in the Cancún Challenge on Saturday, wrapping up a showcase that will only improve the program’s credibility on the national stage. In the three-game tournament beginning on Thursday, Nov. 25, the Rams lost to Baylor University (BU) and Arizona State University but also earned a decisive 67-53 victory against the University of Houston.

Before the season, Head Coach Stephanie Gaitley said this trip to Mexico was going to be a highlight for the team. Fordham was one of nine women’s programs competing at the event, along with the likes of the University of Southern California, Seton Hall University and an early NCAA Tournament favorite, Baylor. The invitation was a testament to Gaitley’s immense success after a decade in the Bronx.

“I didn’t put the schedule up there to look at it,” Gaitley shared with her athletes. “I put the schedule to compete and be successful because I believe in you, I believe in this team, I believe in the talent.”
Fordham seemed to be in razor-sharp form as they headed down south.
Moreover, the Rams entered the tournament with plenty of momentum. After a tough defeat on the road against the University of Notre Dame on Nov. 18, Fordham took on Michigan State University in the Rose Hill Gymnasium on Nov. 21. National recognition mattered little as the final buzzer sounded. The Spartans fell, 71-68.

Since 2011, Michigan State has made eight appearances in the NCAA Tournament, but the Rams got the better of them to advance to 3-1 on the season. In the face of one of the toughest nonconference schedules ever assembled for the program, Fordham seemed to be in razor-sharp form as they headed down south. The Baylor Bears were next.

At this point in the 2021-22 season, Baylor ranks fifth in the country in the Associated Press Poll and eighth in the USA Today/Women’s Basketball Coaches Association Poll. The Bears are a notoriously challenging team to face, and in 2012, they were the first team to finish a season 40-0. In 2019, Baylor won its third NCAA Tournament.

Heading into a matchup against Fordham, the team was 5-1 this season, its only loss coming in a close game against University of Maryland, which ranks eighth in the Associated Press Poll, the Bears lost 79-76.

The prestige that followed the Baylor Bears was displayed by the playing abilities of NaLyssa Smith, BU ’22, and Jordan Lewis, Baylor University Graduate School ’23, who gave Baylor 15 combined points in the first half of the game. Smith created a four-point lead within the first two minutes, and Fordham failed to score for nearly five minutes.

Halfway through the quarter, Kendell Heremaia, Graduate School of Arts and Sciences (GSAS) ’23, showed her star power again as she rebounded a missed shot from Smith, maneuvered her way down the court and found a clean three-point shot. Heremaia seemed to break the ice with the belated opening score, as the Rams finished the first half of the game with a four-point lead. The women from the Bronx were ahead of a national contender, 24-20.

The start of the third quarter proved to be unpredictable as both teams took turns holding the lead. Eventually, two successful three-pointers from Ja’Mee Asberry, BU ’23, and Lewis created a five-point gap. Baylor’s team effort and ability to make consistent shots put them 10 in front at the end of the third quarter, 44-34. The gap continued to grow as almost every member of the Baylor team put at least one point on the scoreboard, leaving the final score 68-53.

In its next two games, Fordham faced off against the Houston Cougars and Arizona State Sun Devils, two teams with their own lists of accolades. Houston defeated the Sun Devils on the first day, but in Fordham’s second game of the Cancun Challenge against the Cougars, the Rams rose to the occasion.

After three competitive quarters against Houston, Fordham scored 11 unanswered points to begin the fourth quarter and cruised to a commanding 67-53 victory. Anna DeWolfe, Fordham College at Rose Hill (FCRH) ’23, led the team with 18 points while Heremaia and Asiah Dingle, FCRH ’22, earned 10 rebounds each. The Rams were 1-1 in the tournament and could have exited with a winning record if not for a poor showing against Arizona State on Saturday.

One day after taking down Houston and two after competing with Baylor, Fordham simply appeared flat against the Sun Devils. The team managed to take a seven-point lead in the first quarter but gradually lost ground and went on to lose by 15. The team shot 30% from the field, and DeWolfe’s 20-point performance accounted for nearly half of the team’s points in the 58-43 defeat.
“On paper a lot of teams are better than us … We didn’t back away from anybody. We’re excited for the challenge.” Head Coach Stephanie Gaitley
A 1-2 record in a tournament is rarely an appealing result, especially for a historically successful team like Fordham. Considering the quality of the competition, the Rams made a solid showing against a nationally ranked rival and two very competitive unranked programs. The fact that they belong in such ranks is astonishing in comparison to nearly any other program at Rose Hill.

Before the season, Gaitley pointed out that playing with a successful reputation involves far more stress than that facing an up-and-coming team. The goal is not necessarily to improve, but to maintain a level of excellence.

“On paper a lot of teams are better than us … We didn’t back away from anybody. We’re excited for the challenge,” Gaitley said.

There are still challenges ahead for Fordham with a month left of nonconference play, but in an inspired scheduling decision, the Rams will not have to leave the Rose Hill Gymnasium to compete for the entire month of December. They begin their six-game home stretch on Thursday, Dec. 2, against Stony Brook University at 7 p.m.