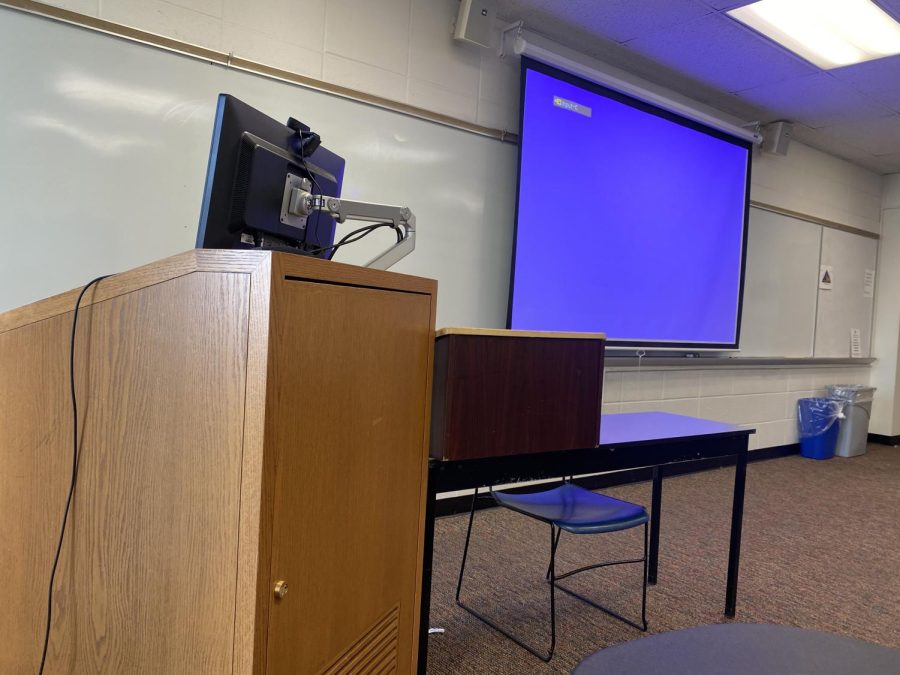 Christopher Trogan was terminated on Oct. 25 following reports of racism in his English class and is preparing for potential private action.

A former lecturer in the English Department, Christopher Trogan, was terminated by Fordham on Oct. 25 after a series of communications with students that stemmed from an incident where he confused the names of two Black students.

The name mix-up occurred on Sept. 24 in a Composition II class taught by Trogan.

The two students whose names were mixed up sent Trogan an email after class expressing that they felt disheartened and disrespected, and believed the mistake occurred because they were both Black.

Later that day, Trogan sent an email addressing the situation to all of his students in both sections of his Composition II course.
“I did not feel heard because every time he (misnamed me) I would tell him, and it just seemed like he would brush it off or that he did not care.”anonymous student
He referred to the name mix-up as an “innocent mistake” and said he had a “confused brain” because the two students arrived late while he was reading the work of another student at the lecturer podium.

“The offended student assumed my mistake was because I confused that student with another Black student,” Trogan said in his email to students. “I have done my best to validate and reassure the offended student that I made a simple, human, error. It has nothing to do with race.”

One of the first-year students who was involved in the name mix-up incident said their experience in Trogan’s class prior to the incident was not great. The student, who asked to remain anonymous due to privacy concerns, told The Observer that Trogan repeatedly got their name incorrect over the course of four classes.
Trogan encouraged students to relay any complaints to Dean of Fordham College at Lincoln Center (FCLC) Laura Auricchio, English Department Chair Mary Bly and other administrators.
“I felt really disrespected,” they said. “I did not feel heard because every time he (misnamed me) I would tell him, and it just seemed like he would brush it off or that he did not care.”

Chantel Sims, FCLC ’25, was the other student involved in the name mix-up. Sims, who is also a member of The Observer’s reporting team, said she did not report Trogan to the administration so she felt like a lot of his action and communication seemed unnecessary.
Trogan concluded the email by stating he is willing to give up his position if the students feel like they have been discriminated against.
“It seemed a little excessive, like all you needed to do was say sorry and it would have been fine,” she said. “We were not actually that upset about him mixing up our names. It was more so the random things he would throw into the response.”

In the email to students, Trogan assured students the course was “centered specifically and explicitly around issues of justice, equality, and inclusion,” and that he has devoted his “entire life” to these issues — describing his dedication to racial justice throughout his career in depth.

Sims said the section of the email that listed his credentials and “everything he has done for minorities” gave her the impression of a white savior complex. The other first-year student interviewed by The Observer agreed with this assessment.
Trogan said both his physical and psychological health declined during the weeks between the Zoom meeting and his termination.
Trogan concluded the email by stating he is willing to give up his position if the students feel like they have been discriminated against.

“Depending on your response to the officials above, I may — or may not — be your professor in class next week. It’s all up to you,” he wrote.

On Sept. 26 — two days after the incident — Eva Badowska, dean of the faculty of arts and sciences and associate vice president, arts and sciences, notified Trogan that he was placed on immediate suspension with pay and benefits and that his actions were under investigation by the university. She gave him an order to not contact any Fordham student or he would face immediate termination. Part of the suspension included barring his access to Fordham’s electronic systems — including email.
The anonymous first-year student did not think Fordham would respond so swiftly to the incident.
Badowska held a Zoom conversation with Trogan on Oct. 5. He was joined by a union representative after he employed his Weingarten Rights, which guarantees union representation during investigatory interviews.

Trogan said both his physical and psychological health declined during the weeks between the Zoom meeting and his termination, which was delivered on Oct. 25 by Badowska.

“I was never informed of the charges against me, nor of the nature of the investigation of which I was the subject,” Trogan said in an email to his former students on Oct. 29 after the termination. “I was kept completely in the dark.”

Pradanya Subramanyan, FCLC ’25, was in the other section of Trogan’s Composition II class and said she was disappointed in how Fordham handled his termination.

She said she thought Trogan was a “really great professor,” so when she received the email about the name mix-up on Sept. 24 and later learned about his suspension and then termination, she was in disbelief.
Foley added that the union could not file a grievance on behalf of Trogan because he is a recent hire.
“I was really shocked because it did not seem like that big of a deal to me,” Subramanyan said. “I did not think he did anything wrong.”

The anonymous first-year student did not think Fordham would respond so swiftly to the incident. “I was surprised that they just got rid of him,” they said.

According to Trogan, in Badowska’s letter of termination, she did not focus on the original name mix-up. The email he sent to his students on Sept. 24 was the catalyst for termination. He also said Badowska ruled that he had not exhibited “proper development” from the Oct. 5 conversation, which also contributed to the decision.
“There may not be much that he can do.”Jeffrey Hirsch, professor of labor and employment law at the University of North Carolina at Chapel Hill School of Law
“Badowska may have carried things out legally, but definitely not morally and certainly not justly,” Trogan told The Observer.

Subramanyan said she understands that the mass email may not have been necessary, but she did not think it was worthy of punishment.

Ashar Foley, chief steward of Fordham Faculty United (FFU) and professor of communications and media studies, said because Trogan stated that he may take private action against the university, FFU cannot make comments regarding his case.
The faculty member, who asked for anonymity due to the sensitive nature of the topic, added that Trogan is “reactive, not reflective.”
Foley added that the union could not file a grievance on behalf of Trogan because he is a recent hire. In a collective bargaining agreement, it was agreed that to be considered full-time faculty and receive the full benefits of the contract, an instructor must teach two full academic years as full-time faculty or one full academic year if they served as an adjunct professor in eight courses prior to the switch.

On Sept. 1, 2021, Trogan began this transition by committing to a one-year lectureship, departing from his role as an adjunct instructor. He lost his union full status because of the categorical switch.

“The eight semesters I had taught as an adjunct were erased,” Trogan said.

Foley said this probationary period for new hires is standard with union contracts.
Trogan emailed a nine-page letter to all of his 80 former students and advisees explaining his experience through the termination process.
“Prior to unionization and our first contract, contingent faculty (adjuncts and lecturers) were always considered in an ‘at-will’ relationship to the University and could be let go at any time without explanation, presumption of reappointment, or recourse to the grievance process, no matter how long or how many classes they had taught at Fordham,” Foley said.

If lecturers are part of at-will employment, they can be fired for “any reason or no reason at all,” according to Jeffrey Hirsch, a researcher and professor of labor and employment law at the University of North Carolina at Chapel Hill School of Law.

In reference to Trogan’s case, Hirsch told The Observer that having at-will status versus being covered by a union’s just cause protections can make a big difference.
The letter also stated that since Trogan no longer has an academic relationship with his former students and advisees, he should refrain from communicating with them in any form.
“He’s sort of falling into this union coverage gap — which frankly most private-sector employees are always in — and it’s hurting his ability to challenge it,” Hirsch said. “There may not be much that he can do.”

Trogan told The Observer that he believes he should be paid his remaining salary for the academic year, and that his benefits should be immediately reinstated to rectify his termination. He also demanded that the Office of Human Resources expunge the incident from his record and stated Badowska should take questions openly from the Fordham community on his termination.

“If any student would like to help me achieve some justice now that my name is mud and my reputation has been ruined, they could insist that Badowska carry out the above three actions at a bare minimum,” Trogan said.
Bob Howe, assistant vice president of communications, said although he understands students have questions regarding Trogan’s termination, Fordham cannot comment on individual cases.
A faculty member at Fordham who has had interactions with Trogan on more than one occasion described him as a person who is “very good at stirring up energy around him but not very mindful of the consequences, for himself or others.” The faculty member, who asked for anonymity due to the sensitive nature of the topic, added that Trogan is “reactive, not reflective.”

Trogan shared a letter with The Observer that he received on Nov. 1 from John Carroll, associate vice president of Public Safety, directing him to not come onto university property based on his terminated employee status and that he could have trespassing charges filed against him if this directive was ignored. The letter also stated that since Trogan no longer has an academic relationship with his former students and advisees, he should refrain from communicating with them in any form.

Prior to receiving the notice from Public Safety, Trogan emailed a nine-page letter to all of his 80 former students and advisees explaining his experience through the termination process.

“Their team of lawyers may now even come after me — even after my termination — with threats and charges against me personally and professionally for sending this to you, but I will deal with those when they come,” he wrote in the Oct. 29 communication to his former students.

“The University takes personnel matters very seriously, reviews decisions on multiple levels, and addresses such matters confidentially in accord with University policies,” he said.

Samantha Stone, a lecturer of English, will teach Trogan’s two Composition II sections for the remainder of the semester. Sims said Stone is continuing to teach according to the syllabus established by Trogan, so the transition has not been difficult.