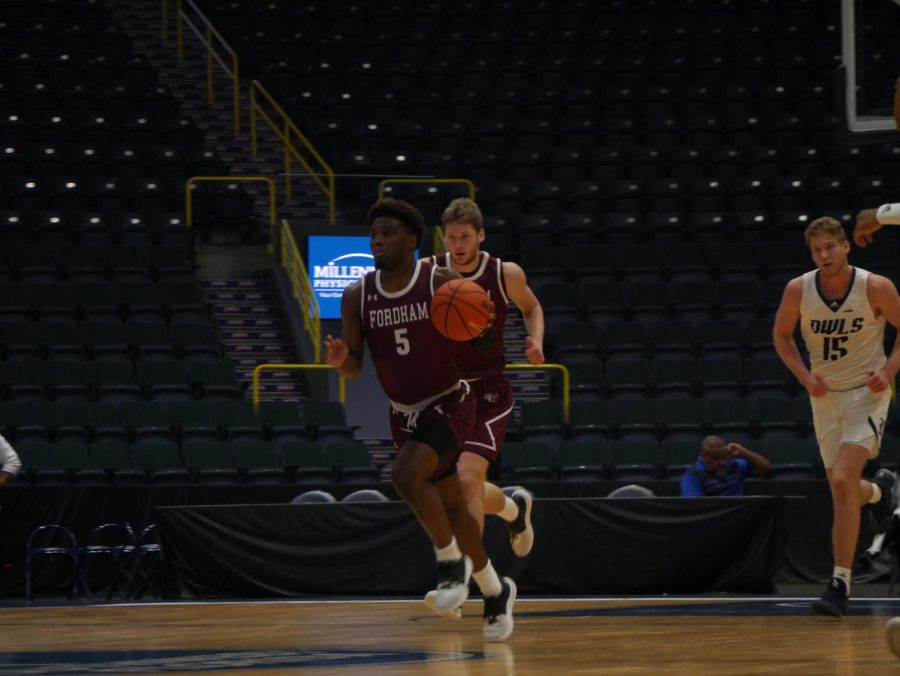 The Fordham men’s basketball team finished in third place at the Gulf Coast Showcase. The tournament took place over the course of three days from Monday, Nov. 22, to Wednesday, Nov. 24, and featured eight teams from all over the country.

The Rams’ schedule consisted of matchups against the University of Akron (UA), University of Delaware (UD) and Rice University. Fordham won two of those contests, but lost in its second game against Delaware, pushing the Rams into the third-place match.

Fordham’s first game was on Nov. 22 against the UA Zips. The Rams were able to subdue the Zips’ offense, holding them to just 43 points. Akron shot just 1-for-18 from three-point range during the game. Fordham, on the other hand, had no trouble scoring as Antonio Daye, Jr., Fordham College at Rose Hill (FCRH) ’23, and Darius Quisenberry, Graduate School of Arts and Sciences (GSAS) ’22, combined for 36 points. Fordham opened the week with a dominant win against the Zips, 63-43.

The Rams’ second game was not as easy. Fordham faced a strong Delaware offense that overpowered its defense. Led by Dylan Painter, University of Delaware Graduate College ’22, Jameer Nelson, Jr., UD ’23 and son of 14-year NBA veteran Jameer Nelson, and Kevin Anderson, UD ’22, the Blue Hens dominated with an 81-point performance against the Rams. The Delaware trio scored 17, 15 and 11 points, respectively, in the game.

Fordham’s offense simply could not keep up with the Blue Hens. Despite a well-rounded attack with four starters scoring in double digits, the Rams fell 81-71 and missed out on the championship game. This set up a matchup against the Rice University Owls for third place in the tournament.

Quisenberry and Daye once again led the Rams in scoring, contributing 24 and 20 points, respectively. But 18 points from Antrell Charlton, FCRH ’24, were what ultimately secured victory for Fordham. The Indian River State College transfer improved on his one-point performance in the game against Delaware by shooting 4-for-7 from three and snatching 12 rebounds for the Rams.

The game was close throughout, and Fordham held just a three-point lead with under two minutes remaining. But two free throws from Chuba Ohams, GSAS ’22, stretched the lead to five before a dagger three-pointer by Charlton with 54 seconds left ensured a win for the Rams.
The two victories marked an important milestone for Fordham, as the Rams surpassed their 2020-21 win total of two.
The Owls kept the game close due to an impressive scoring effort by Carl Pierre. Pierre, a graduate student at Rice, shot 6-for-7 from behind the three-point line and scored 26 points to lead Rice. His efforts were ultimately in vain though, as Fordham emerged victorious, 84-74.

Chuba Ohams played an important role in Fordham’s success at the showcase. Ohams averaged 9.3 points and 6.0 rebounds while operating as a key role player throughout the week.

The Rams’ performance brought their record to 4-3 on the season. The two victories marked an important milestone for Fordham, as the Rams surpassed their 2020-21 win total of two. The showcase illustrated the team’s improvement and dedication to building a foundation ahead of the Atlantic 10 competition starting on Dec. 30.

Fordham also beat Central Connecticut State University on Sunday, Nov. 28, to bring its record to 5-3. The Rams were led by Quisenberry’s 27 points, Daye’s 25 points and Ohams’ 19 points and 13 rebounds in the 89-83 double overtime victory. Fordham will take on the St. Francis College Brooklyn Terriers in their next contest on Dec. 1.