A look into the irresponsible accumulation of manmade objects in space 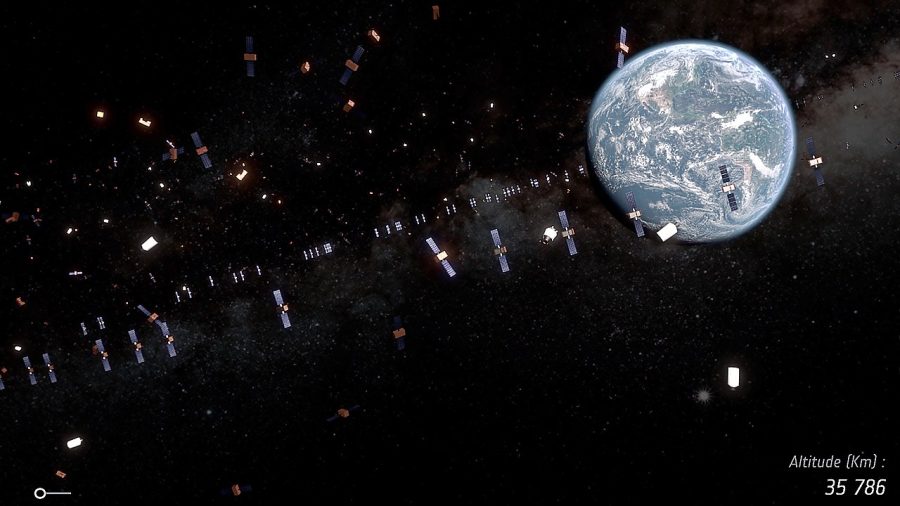 Space junk poses a threat to the ISS and any other spacecraft in the atmosphere. It also can affect us, since it can hit GPS systems, military technology and more.

On Tuesday, Nov. 16, I was sitting in my night class when my classmate looked at her phone and gasped. I glanced over inquisitively, and she turned her phone toward me to display an Apple News alert proclaiming that a Russian weapons test had created multiple pieces of space junk, threatening the Space Station.

I looked around the classroom, expecting to see a frenzy of panic and concern, but instead, the room was perfectly calm and silent. I was wondering why more people were not alarmed about the situation, but then I had to remind myself that stories akin to this are much too familiar.

Russia decided to test an anti-satellite defense weapon on Nov. 15. There was no logistical reason for this test, as no satellites orbiting over Russia were harmful. In fact, the satellite they destroyed, Cosmos 1408, was put in place by Soviet intelligence in 1982. The test was simply a reckless way to prove to the world that the Russian defense system has the ability to destroy a satellite if need be.
Space junk has been accumulating in space for years, but the issue has only recently been acknowledged.
After firing a missile that destroyed the satellite, hundreds of thousands of pieces of debris were sent into orbit. Because of this, seven astronauts residing in the International Space Station (ISS) had to seek shelter to protect themselves as the spacecraft flew through the cloud of man-made debris.

However, the threat presented by the fragmented pieces from the satellite did not end when the ISS made it through the cloud: This space junk will pose a threat to satellites, space missions and the sustainability of outer space for many years.

Space junk has been accumulating in space for years, but the issue has only recently been acknowledged. The earliest known piece of space junk resulted from the first human-made satellite, Sputnik 1. On Oct. 4, 1957, the satellite escaped Earth’s gravitational pull and marked the first permanent footprint from humans in space.

Fast forward 64 years, and now there are 23,000 known man-made fragments larger than about 4 inches — roughly the size of a credit card or bigger — floating around our planet. Furthermore, there are an estimated 500,000 pieces between 0.4 inches and 4 inches across that join those larger fragments in space. Long story short: There is a lot of junk floating around us.

Besides a satellite leaving Earth’s orbit, there are many other reasons for the existence of unnatural objects in space: satellites colliding, tools from the ISS, pieces expelled from a rocket launch, etc.

Space junk is a major inconvenience to, and sometimes dangerous factor in, a spacecraft’s journey. If debris is in the way, the team must calculate the risk of staying on path and the probability of a collision. If they believe that the probability of a collision is low enough, they will execute a debris avoidance maneuver.
With space junk becoming more of a problem with every year that passes, it is incredibly negligent and irresponsible to plan for space tourism without addressing space junk.
The International Space Station has conducted 29 debris avoidance maneuvers since 1999, including three in 2020. Due to an increase in space junk, the rate at which debris avoidance maneuvers are necessary is rapidly increasing, making future space tourism or travel much more difficult, if not impossible.

Jeff Bezos, who famously traveled to space with his space tourism company Blue Origin’s rocket ship earlier this year, has announced plans to open a space tourism station that includes a “space hotel.” As someone who constantly marvels at the intricacies of space, I have always been excited by the idea of space tourism. I would put my name first on any list to take a trip around the Earth, land on another planet or experience zero gravity. However, I know the difficulty in executing my desires and the complications that now threaten the legitimacy of space travel.

With space junk becoming more of a problem with every year that passes, it is incredibly negligent and irresponsible to plan for space tourism without addressing space junk. Bezos even said in an interview that “We need to take all heavy industry, all polluting industry, and move it into space. And keep Earth as this beautiful gem of a planet that it is.”

What Bezos seems to be implying is that we need to try our best to preserve the integrity of the planet, but throw the polluting and harmful industries into space. Putting the questionable logistics of moving industries to space aside, the attitude that claims space can be harmed in order to preserve Earth is dangerous and contradictory; the space orbiting Earth is essential for our present society and future space travel goals.

Sadly, Bezos is not the only person who has a lackadaisical attitude on what is thrown into space. Russia, in the same year that they needlessly put hundreds of thousands of pieces of space junk into orbit, had previously announced they would be returning to the moon. It is extremely contradictory and hypocritical to carelessly throw junk into space while also promising a future of space travel.

Aside from possibly taking away the chances of space tourism, space junk also threatens the functionality of satellites. According to NASA, “a 1 centimeter paint fleck is capable of inflicting the same damage as a 550 pound object traveling 60 miles per hour on earth.” There are roughly 523,000 pieces of man-made debris, of varying sizes, floating through a network of 1,738 satellites currently in orbit. This satellite network is crucial for modern communication, commerce, travel and security systems. Anyone else see a problem here?
Humanity is so careless about the destruction of our own planet that I suppose it only makes sense that the sustainability of space wouldn’t be respected either.
As more and more space junk orbits Earth, many components of our society are at risk: GPS systems, airline routing systems, military technology, business and finance, weather tracking, and phone service. Needless to say, it is vital that we preserve the safety of satellites, and the inconsiderate actions that lead to the accumulation of space junk hinders their protection.

As a young adult trying to make tentative plans and goals for my life, I am constantly aware of the shadow that our dying planet casts on my future. The trash and pollution we have generated for years has changed the trajectory of our planet and poses a potentially irreversible fate. Many scientists, when discussing the grim future of our planet, will make a remark regarding the hope for eventual habitation on other planets and space travel.

While this is very exciting, I can’t help but be pessimistic about the likelihood of it happening. Humanity is so careless about the destruction of our own planet that I suppose it only makes sense that the sustainability of space wouldn’t be respected either. This reckless attitude toward cluttering the space around Earth with man-made objects is causing long-lasting damage, and I am tired of it.

There is no Space B.