Marvel Studios’ ‘Eternals’ Is Not a Bad Marvel Movie, It Just Subverts a Lot of Expectations 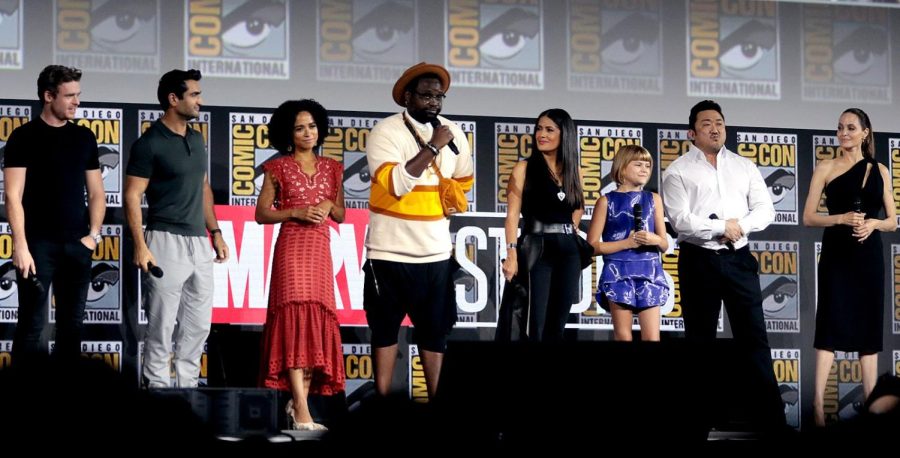 The cast of “Eternals” speaks at 2019 ComicCon in San Diego.

The Marvel Cinematic Universe (MCU) is about to get a lot bigger. While some people might be annoyed that Marvel is releasing so much content this year, many can agree that the studio is dedicated to maintaining its fan base.

“Eternals” is the third film from Marvel Studios to debut in 2021. Just like with the other Marvel films, I was looking forward to this movie. In particular, I was excited to see Chloé Zhao direct a Marvel movie with a star-studded cast. Since her film “Nomadland” (2020) won Best Picture at the Academy Awards, Marvel fans were excited to see how her filmmaking will impact the general audience’s perception of the MCU. The trailers looked beautiful and promised that this new story for the MCU was going to be unique, which proved to be true after watching it.

The film introduces a large group of heroes to this cinematic universe. Each character is part of an alien race named Eternals, destined throughout history to stop the Deviants, a group of human-hunting monsters, from invading Earth. The Eternal Ikaris, played by Richard Madden, is searching for his fellow Eternals in the present day after discovering that the Deviants returned. Throughout the film, viewers are introduced to the other Eternals and begin to see how they have affected the history of the MCU.

“Eternals” makes history in the MCU with the first deaf superhero, Makkari, played by Lauren Ridloff. The scenes where she used her speed were very thrilling and definitely the best portrayal of a speedster in any comic book movie.

While the film was not action-packed, the character development made up for this absence. The relationship between Gilgamesh and Thena, who were played by Ma Dong-seok and Angelina Jolie, respectively, was very heartfelt and fans should be excited for their arc throughout the film.

The humor of the film was also well done. Rather than forcing jokes into every scene like in some Marvel films such as “Avengers: Age of Ultron” (2015), “Guardians of the Galaxy Vol. 2” (2017), and “Ant-Man and the Wasp” (2018), the humor was used to show the personality of the characters. In particular, the Eternal Kingo Sunen, played by Kumail Nanjiani, used his humor to exemplify his life of fame.
While “Eternals” may be confusing at first to understand how these new characters fit into the MCU, their story leaves many doors open for the future of the franchise.
The film’s costume design was also phenomenal. The costume designer, Sammy Sheldon, did a great job and definitely deserves praise for the designs, especially with Madden’s and Kit Harrington’s characters. She was also the costume designer for other Marvel films such as “X-Men: First Class” (2011) and “Ant-Man” (2015).

While I found the film to have many strengths, there were some clarity issues that couldn’t be missed by the viewer. In particular, the start of the movie should have included more exposition to the Eternals rather than immediately introducing their situation in the present day. Also, similar to many Marvel movies, the villain,  Kro, played by Bill Skarsgård, was not great, and his motives were very cliché. His plan to destroy civilization and kill the Eternals did not serve a purpose to the development of the characters and acted more as a lazy excuse for action sequences. However, the twist villain is very surprising and makes viewers wonder if more superhero films should follow this plot element.

While “Eternals” may be confusing at first to understand how these new characters fit into the MCU, their story leaves many doors open for the future of the franchise. As usual, don’t forget to stay until after the credits. The two post-credits scenes are phenomenal and introduce some exciting new characters to the cinematic universe.