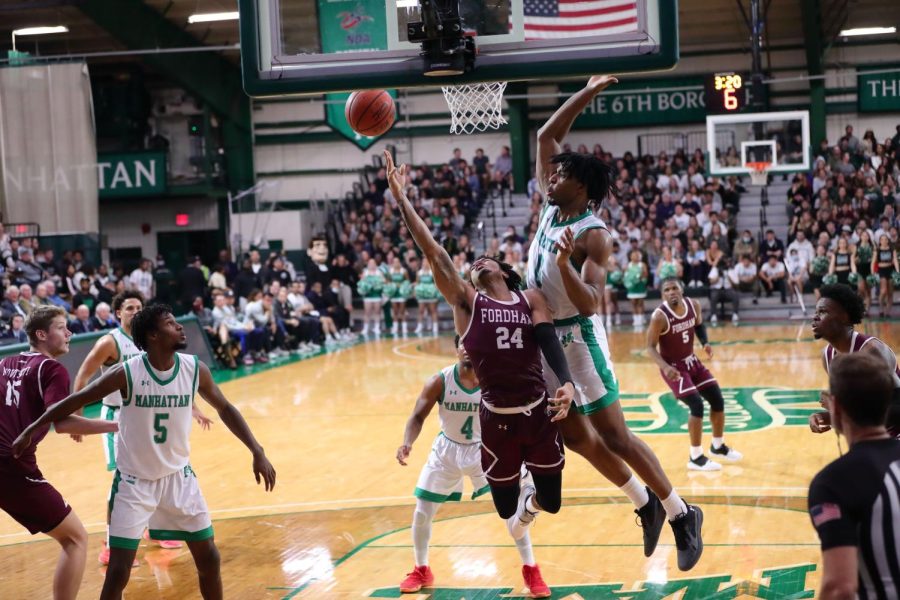 After leading for the majority of the game, Fordham Men's Basketball lost to Manhattan following a 10-point rally in the final two minutes.

The Fordham men’s basketball team lost its first game of the season on Friday, Nov. 12, against Manhattan College (MC), 66-60. In the 113th meeting between these two teams, the Rams led for most of the game but succumbed to a 10-point rally by the Jaspers in the final two minutes.

One could make the argument that Fordham’s rivalry with Manhattan in men’s basketball goes deeper than any other in the school’s history. The cancellation of “The Battle of the Bronx” in the 2020-21 season due to COVID-19 was the first break in annual action between the schools since 1945.

Manhattan students filled the “Sixth Borough” of Draddy Gymnasium in Riverdale, New York, in a triumphant return to the legendary venue after a season without fan attendance. These fans were rewarded for their support with a thrilling come-from-behind victory for the Jaspers, but anyone hoping for a technical classic left sorely disappointed.
Fordham did not make a single three-point attempt in the first half.
Despite leading for most of the game, Fordham committed 25 turnovers while shooting 3-for-15 from beyond the three-point line. Trailing for most of the game, Manhattan didn’t perform much better with 18 turnovers and two three-pointers on 11 attempts.

It was a poor game between two developing teams, but the Rams seemed to have things well in hand at various points in the contest. In the opening seven minutes of the first half, Fordham outscored Manhattan 11-2 as the Jaspers struggled from every spot on the floor.

The Rams’ weaknesses were less noticeable in the early stages because of their opponent’s severe scoring drought, but cracks began to show when the Jaspers started to rally. For instance, Fordham did not make a single three-point attempt in the first half, and to compensate for this, the team began to crash the paint with Chuba Ohams, Graduate School of Arts and Sciences (GSAS) ’22.

In the first half alone, Ohams scored 15 points and went on to collect 18 rebounds by the end of the game. A dunk by the big man late in the half gave the Rams a 29-19 lead, the team’s largest lead of the game, but his production thereafter waned. Following the defensive adjustment to contain Fordham’s primary scorer, Manhattan scored eight points in the final two minutes and only trailed 31-27 at halftime.

The game through 20 minutes was essentially a series of bad turnovers and long scoring runs by both teams, but a three-pointer by Manhattan guard Samir Stewart, MC ’22, with 5:42 remaining was the only shot made by either team beyond the arc. With Ohams contained down low, Fordham’s shooting had to improve.

After a fairly even beginning to the second half, the Rams kicked into gear with 12:30 remaining. On a 7-2 Fordham run, Darius Quisenberry, GSAS ’22, finally broke the ice with a three-pointer to put the team ahead by 10. When the Jaspers began to inch their way back, he made another to put Fordham ahead 51-42 with 8:39 remaining.
A loss in which neither team played well enough to win is a dark mark on what may prove to be a tumultuous season for the Rams.
Firmly ahead on the scoreboard with so little time left, the Jaspers essentially needed their opponent to collapse. Following their second three-pointer of the game, the Rams turned the ball over or missed on four straight possessions, and Manhattan took advantage each time, scoring seven unanswered points to get within two of the lead with seven minutes left.

Fordham continued to fight for the lead and led 58-56 with 1:46 to go in the game, but following a media timeout, the Rams committed one final error. Ohams, who only scored two points in the second half, turned the ball over for an eighth time, leading to a game-tying layup by star guard Elijah Buchanan, MC ’22, with 1:15 remaining.

The Rams failed to score on a visually unappealing attempt in the ensuing possession, and Manhattan assumed control with a chance to take over. The Jaspers didn’t take long, as Stewart scored a three-pointer in transition to give the team a 61-58 lead, their first of the game, with 39 seconds remaining.

The closing seconds of the contest mostly consisted of free throws, and Fordham never led again in a 66-60 defeat. It was a deflating loss in the context of the rivalry, which Fordham currently trails with just 54 wins to 59 losses since 1912. But in more immediate terms, a loss in which neither team played well enough to win is a dark mark on what may prove to be a tumultuous season for the Rams.

Many fans at Fordham are enthusiastic about debuting Head Coach Kyle Neptune, but few are expecting success out of the gate. With that in mind, it’s important to note that many of the new players he has recruited, namely Quisenberry and Antonio Daye Jr., Fordham College at Rose Hill ’23, have already made an impact, even in defeat.

Veteran Ohams’ production, and then lack thereof, ultimately decided this game, but Daye Jr. quietly led the team in scoring with 18 points, though he did commit five fouls and seven turnovers. Quisenberry also proved effective with 12 points, though something akin to his 25-point performance against Columbia University could have proved more useful here.

Neptune’s finished product at Fordham is nowhere near fruition after two games. This loss to Manhattan may prove to be an omen for the rest of the season, one in which expectations are about as low as possible for a Division I program. One question remains on everyone’s minds, though it may take years to answer: Is Neptune the guy who turns Fordham men’s basketball around?