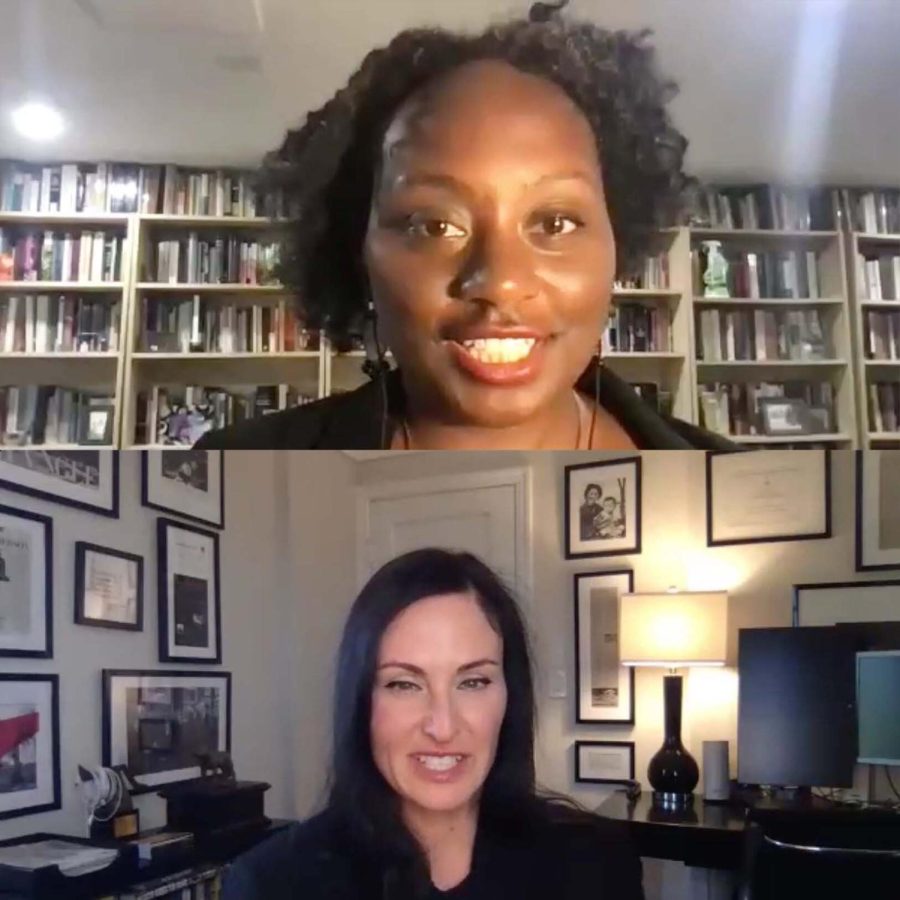 The Sperber Prize was awarded to Lesley Blume and Kerri Greenidge this year in an awards ceremony over Zoom.

The Sperber Prize Committee held its first-ever Zoom award ceremony on Wednesday, Nov. 3. The prize was awarded to two authors this year: Lesley M. M. Blume for “Fallout: The Hiroshima Cover-up and the Reporter Who Revealed It to the World” and Kerri Greenidge for “Black Radical: The Life and Times of William Monroe Trotter.”

The ceremony, which was not held last year due to the pandemic, usually takes place in person at Fordham’s Lincoln Center campus but did not this year due to university COVID-19 restrictions. According to Beth Knobel, associate professor of communications and media studies and director of the prize committee, both recipients do not live in New York City and many of the attendees are not part of the university community, so hosting the event virtually made it more accessible.

“It was really sad for those of us who had been attending the ceremony in person to do it online, but it was a lot better to do it online than not to do it at all,” Knobel said.
“Since I was a teenager, my entire life has been centered on newsrooms and my extended community of reporter colleagues is like family.”Lesley M. M. Blume, author of “Fallout: The Hiroshima Cover-up and the Reporter Who Revealed It to the World”
According to Knobel, there are usually 60 to 100 people in attendance. This year there were an estimated 20 people in attendance in the Zoom meeting. She hopes that because the Zoom event was recorded, it will be watched and used for clips, giving it a “second life.”

During the ceremony, Greenidge and Blume spoke about their books and both emphasized the importance of journalism.

Blume’s idea to tell the story of a watchdog journalist who uncovered information about the Hiroshima bombings came from the attack on journalism by political figures in 2015.

“Since I was a teenager, my entire life has been centered on newsrooms and my extended community of reporter colleagues is like family, and then suddenly in the Trump era, my family was on a hit list,” Blume said.

Greenidge came about her topic differently, writing a biography of a man, William Trotter — a civil rights hero who started a newspaper in Boston and educated many people on racial injustice in the early 1900s — who she had learned about from a young age but was told there wasn’t enough information on. Greenidge agreed with Blume about the importance of journalism and journalists throughout history.

“Having a press that speaks to and holds power accountable — if that doesn’t exist in periods in history, then often stories aren’t recorded as they happen,” Greenidge said.

The awards were held up to the screen and congratulations were made verbally, with the promise of the prize money coming in the mail.
Knobel hopes that the ceremony will return in person next year.
The event also featured a giveaway of the award recipients’ books. One student in attendance at the event, Ana Kevorkian, Fordham College at Lincoln Center ’25 and a member of the copy desk for The Observer, won a copy of Blume’s biography.

“I’m really excited to read biographies and read the story of such an important journalist in American history,” Kevorkian said.

Starting in January the committee will begin its deliberations on books and decide whether they will continue to have two winners each year. Knobel hopes that the ceremony will return in person next year.

“To have this celebration of these books is really like a celebration of the art and craft of journalism, and I really love having that in person and gathering our students for a night of inspiration,” Knobel said.