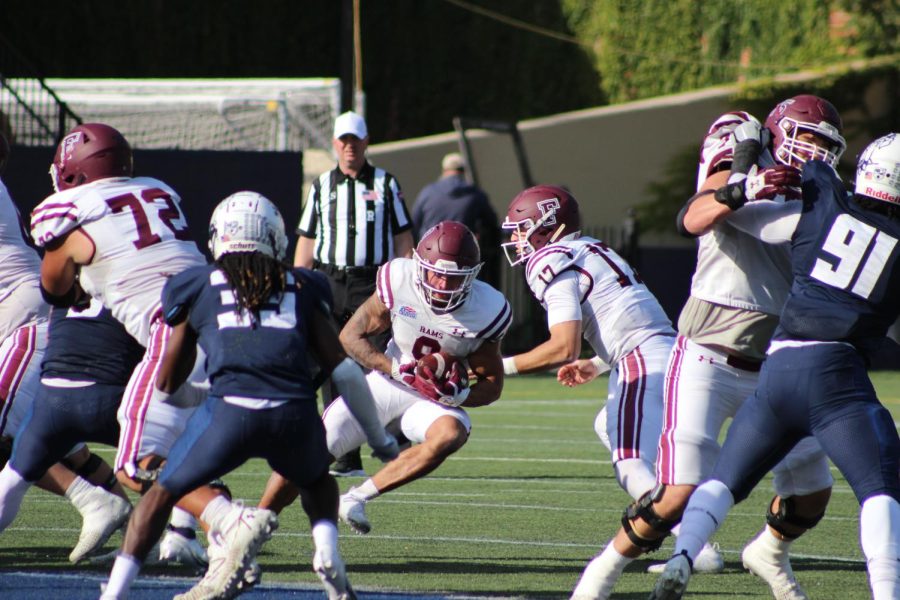 Zach Davis, GSAS ’22, made his first start since the season opener and rushed for 103 yards and two touchdowns.

The Fordham football team defeated the Georgetown University (GU) Hoyas 41-20 on Saturday, Nov. 6, to extend the program’s winning streak to six games in 2021. Now 4-0 in the Patriot League, the Rams will play the similarly undefeated College of the Holy Cross Crusaders next weekend for first place in the conference.

On the road against Georgetown, quarterback Tim DeMorat, Fordham College at Rose Hill (FCRH) ’22, played as well as he has all season, throwing for 273 passing yards and three touchdowns against the Hoyas. But he wasn’t alone on offense, as Fordham also managed to find success on the ground.

In his first start since the season opener, running back Zach Davis, Graduate School of Arts and Sciences ’22, ran for 103 yards and two touchdowns on 21 carries. Meanwhile, Trey Wilson III, Gabelli School of Business at Rose Hill (GSBRH) ’23, made the most of his supplemental role and ran for 76 yards on nine carries, including one for a 33-yard touchdown in the third quarter.
“I thought our guys did a real nice job putting some methodical drives together.” Joe Conlin, head coach
Head Coach Joe Conlin was happy with the offense’s well-rounded performance after the game.

“Offensively, it was just steady all game,” Conlin said. “I think they’re always looking for the fast start, but I thought our guys did a real nice job putting some methodical drives together.”

Though the Rams entered their matchup against the 2-6 Hoyas as heavy favorites, they did not take command immediately. In fact, Georgetown’s first drive of the game lasted nearly five minutes and ended on a three-yard rushing score by running back Jackson Saffold, GU ’22. The extra point attempt was no good, but the Hoyas led 6-0.

Fordham responded immediately with a nine-play, 64-yard drive, and Davis tied the game with his first touchdown of the season from four yards out. But the Rams failed to take the lead when Fordham kicker Nick Leinenweber, FCRH ’22, took his turn missing the extra point.

The first quarter ended in a 6-6 tie, but Fordham was in the midst of another lengthy possession — one that would soon turn the tide. When play resumed, the Rams were already deep in the Hoyas’ territory, and on the sixth play of the quarter, DeMorat found Dequece Carter, GSBRH ’23, in the back of the end zone for a 10-yard touchdown.

Down 13-6, Georgetown’s offense took to the field in search of a countering blow. Instead, the drive ended when a fourth-down pass from quarterback Pierce Holley, GU ’23, was intercepted by defensive back Jesse Bramble, FCRH ’22. The team captain’s first pick of the season gave the Rams momentum, but oddly enough, it didn’t directly lead to a score.

On Fordham’s next drive, DeMorat and Davis moved the offense 59 yards down the field on 11 plays. But on fourth-and-one with 5:51 remaining, Davis was stuffed at the goal line, giving the Hoyas possession. The defensive stop by Georgetown had the potential to change the game, which made it all the more gut-wrenching when Fordham’s opponent immediately blundered the opportunity.

On the first play after the turnover, Saffold took the ball out of his own end zone, mishandled the handoff and fumbled, giving possession back to the Rams at the three-yard line. Davis only needed one play to redeem himself and put Fordham ahead 20-6.

The half ended quietly. Leinenweber missed another kick on a 37-yard field goal attempt with 10 seconds remaining, but it didn’t matter. For all intents and purposes, the Hoyas had already been defeated.

In the second half, the Rams scored three unanswered touchdowns on four drives to take a 41-6 lead with 9:25 remaining in the fourth. Two of these were passing scores from DeMorat to Fotis Kokosioulis, FCRH ’22, who now has 11 touchdowns this season and has scored at least one in seven of the team’s nine games.

On Sept. 4, the Crusaders managed to defeat the University of Connecticut 38-28 in the program’s first victory over an FBS school in 19 years. On Sept. 25, they defeated Monmouth University 45-15, two weeks after the Hawks pulled off a 26-23 upset on Fordham’s home turf. In another stellar season, the reigning conference champions from Worcester have terrorized conference opponents, outscoring Patriot League rivals by 110 points in four games.

Fully grasping the rivalry between these two teams would require multiple lifetimes. Since 1902, Fordham and Holy Cross have played on 58 occasions despite two hiatuses from 1931 to 1947 and 1954 to 1990.

Since resuming their annual tradition, the two Jesuit schools have played one another all over the world, from Bermuda to Ireland to Yankee Stadium. Games between them now are reminiscent of times when they were powerhouses, bowl contenders and household names.

The days of Lombardi and “the Seven Blocks of Granite” have long passed. The world of college football has grown and left both schools behind. But next Saturday, Fordham and Holy Cross will face off as powerhouses on Coffey Field once more, and championship glory may hang in the balance.