In her studio adaptation of Robert Askins’ classic play, director Emily Hoffert opens a window into a world of devotion, puppets and chaos 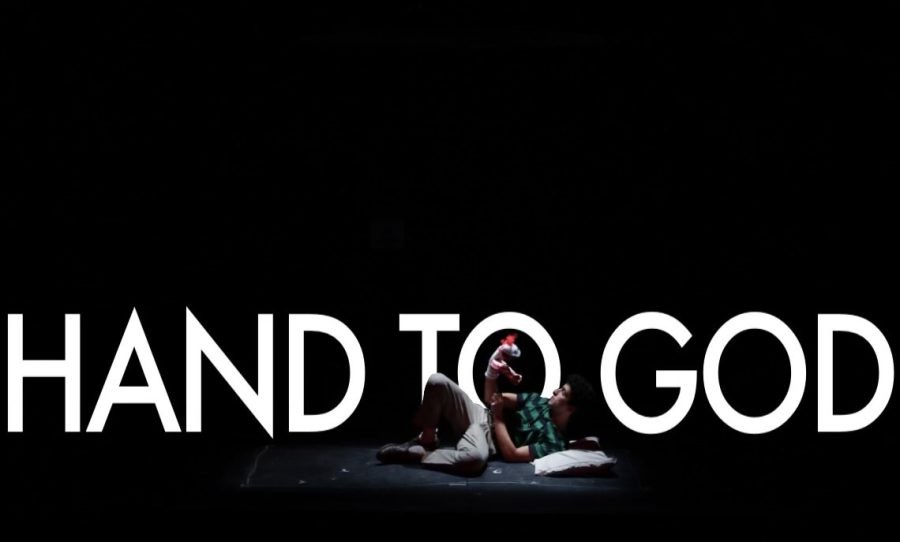 Emily Hoffert's take on the classic “Hand to God” was put on at Fordham's studio theater in October.

There is something very interesting about walking into a theater unaware of what you will see. It adds a sense of mystery and curiosity that rarely fades away, and heading blindly into the theater to watch Emily Hoffert’s — Fordham College at Lincoln Center (FCLC) ’22 — take on Robert Askins’ classic play “Hand to God” was a blessing in disguise.

In her studio debut adaptation of Askins’ play, Hoffert, a senior theater major with a directing concentration, is able to fit the marvels of a Broadway show into the four small walls of Fordham’s Veronica Lally Kehoe Studio Theatre, making it seem bigger than ever.

As the audience steps into the theater to take their seats, they are met with an unusual yet exciting scene. The actors — Ryan Murphy, FCLC ’25; Frederick Bredemeyer, FCLC ’23; Samantha Bohrer, FCLC ’23; Orlando Grant, FCLC ’22; and Lila K. Smith, FCLC ’24 — find themselves moving to the beat of loud rap music, which serves as a prelude to the show.
Even though a feeling of sudden uneasiness still permeates the room, there is now an air of suspenseful stillness.
They move around, drawing books on the walls, writing messages of praise to the Lord and putting up posters similar to the ones found in a children’s pre-K classroom with words of unity and encouragement. In the midst of this relatively calm chaos, the actors move in slow motion under red lights and burst into very calculated movements, which together create the sort of jarring feeling that will permeate the room for the entirety of the play.

As the lights go down, the spectators are met by a sock puppet, monologuing his way through a series of thoughts regarding human stupidity, the birth of right or wrong and the evolution of what seems to be his version of the devil. Immediately, the audience is caught off guard.

In a relatively unexpected turn of events, the audience enters a world of religious devotion set in the small town of Cypress, Texas, where Margery (played by Smith), a recent widow, runs a puppet club inside the basement walls of a church. Her son, Jason (played by Bredemeyer), sits to her right and fiddles with his sock puppet whom we met at the very beginning of the show, and even though a feeling of sudden uneasiness still permeates the room, there is now an air of suspenseful stillness.

The church room and the seemingly normal scenario create a sense of confusion. After the heavy-hearted monologue and the beginning movements from the actors, there is only space to wonder: When will something go wrong?

Alongside Jason and Margery, we also find Jessica (played by Bohrer), a young girl who has Jason’s heart, and Timothy (played by Murphy), a student who is secretly in love with Margery. As the play progresses, we go from a calm environment in the basement of a church to a chaotic series of events that take place in that same room.

Because of the COVID-19 restrictions that have been established in the theater, there is very limited space for any hands-on intimacy scenes. However, Hoffert and her team were able to fit the intimacy of “Hand to God” into the basic guidelines of social distancing.

“Hand to God” is only the third production and the second studio show to be put up on a Fordham stage after the COVID-19 pandemic hiatus, and even weeks after its close, one can hear astounding reviews from every student in the theatre department and out.

With a full house every day, according to Scott Yezzi, FCLC ’24 and a theater major with a stage management concentration, “Hand to God” gave its audience a break from everyday life and welcomed them into a space of fear, laughter, confusion and overall shock. Hoffert’s adaptation of Askins’ classic play is everything you need and nothing close to what you expect, in the best way possible.