The Opioid Crisis is Still Here — Even in a Pandemic

Despite minimal coverage, the opioid epidemic continues to persist in the midst of the COVID-19 pandemic 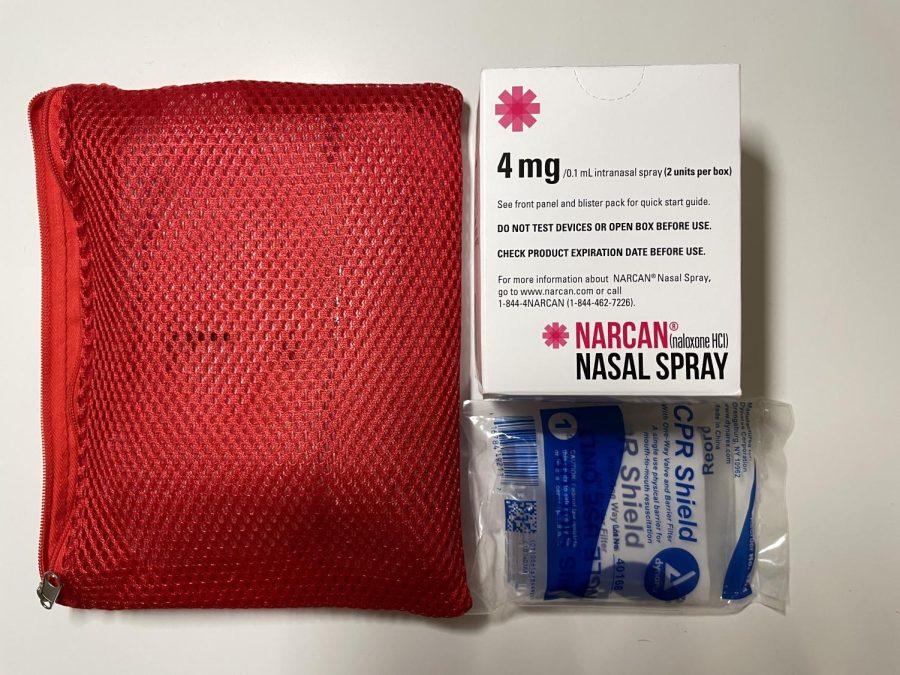 Narcan, a naloxone nasal spray, is a life-saving medication that can reverse the effects of an opioid overdose.

The COVID-19 pandemic has taken over headlines for nearly two years, but ongoing epidemics in the world are still as relevant as they were before. For three decades, the opioid crisis has harmed communities around the country and continues to grow more severe.

Opioids are drugs synthesized from opium poppy plants and include heroin, synthetic opioids (fentanyl), oxycodone, hydrocodone and many more. As of 2019, 70% of drug overdose deaths involved an opioid, a rate that has increased sixfold since 1999.
When It All Started
The opioid epidemic has been divided into three waves which occurred in 1991, 2010 and 2013, years marked by exceptionally high rates of death from drug overdose. The first wave began when there was an increase in prescription opioids for pain treatments paired with misleading information from pharmaceutical companies on its low addiction rate.
Unsafe heroin injections also caused an uptick in other diseases like HIV/AIDS, skin infections, and infections of the bloodstream and heart.
Soon enough, opioids were promoted for non-cancer related pain, resulting in 86% of opioid users being non-cancer patients. Loose prescription tendencies caused vulnerable groups to become addicted to a strong drug despite little-to-no research on aftercare.

The second wave was characterized by heroin abuse as the drug was made harder to obtain by prescription and was largely sold in the illegal market. The number of deaths related to heroin overdose increased by 286% from 2002 through 2013.

Physicians prescribe opioids to help alleviate critical pain due to cancer, post-operational recovery or extreme coughing. When used in the absence of pain, the drug activates a reward process in the brain that causes motivation for repeated recreational drug use.

Opioids block any pain signals sent from the brain, resulting in large amounts of dopamine to be released. Opioid misuse can initiate a chain of possible effects from slowed breathing to hypoxia and even permanent brain damage. Hypoxia is described as a condition in which scarce amounts of oxygen reach the brain for proper function and circulation.

Medicines like buprenorphine and methadone can help people break their addiction to opioids as they bind to the same opioid receptors to minimize the withdrawal side effects and cravings. Injectable naloxone, or the nasal spray, is widely used to treat an overdose patient by immediately blocking the effects of the opioid.
Rates Since COVID-19
There has been a steep rise in the number of drug overdose deaths since the height of the pandemic. According to the National Center for Health Statistics, from December 2019 through December 2020, more than 93,000 Americans have died from an overdose, a 29.4% increase from the previous year. The daily deaths from overdose were close to the daily deaths from COVID-19.

Years of misleading information from Purdue Pharma and other drug companies, economic recession, and constant changes in pain management has led many to reexamine the opioid crisis response. Responses by state and local governments were questioned after an increased prevalence of cheaper illicit opioids like fentanyl and heroin.

Soon the initiation of medication-assisted therapies and overdose prevention workshops increased, and physicians were given approval to prescribe buprenorphine for opioid use disorder in April 2021. Rahul Gupta has been appointed the head of the Office of National Drug Control Policy under the Biden administration to increase financing for addiction prevention and treatment.

Opioid overdose continues to be a major health issue alongside COVID-19. Recent efforts by the federal government to curtail the impact of opioids are just another chapter in one of the country’s most prolonged public health crises.