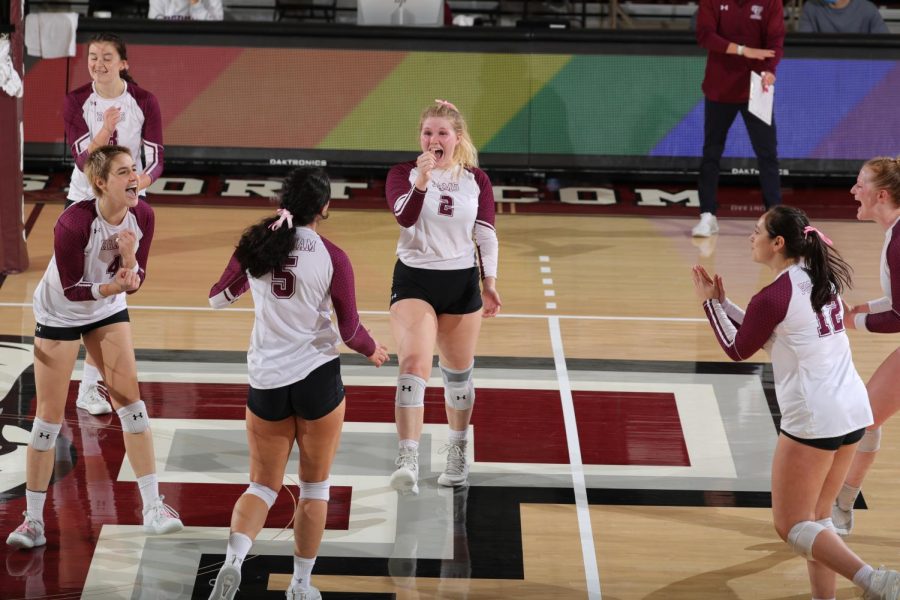 The dominant showing featured the volleyball team's first win in A10 play this season, demonstrating a pivot away from their struggles.

By GABRIELLA BERMUDEZ and AURÉLIEN CLAVAUD

The Fordham volleyball team swept the George Washington University (GW) Colonials in three straight sets on Friday, Oct. 8, in the Rams’ first Atlantic 10 (A10) victory. Entering this game, the Rams were 3-11 overall and 0-3 in A10 play. The Colonials remained winless this season, falling to 0-15.

The first set was contentious with five lead changes and 10 ties until the final few serves when Sarah Pintel, GW ’23, made a significant error and broke a 17-17 tie in Fordham’s favor. Up one, Fordham setter Megan Brzozowski, Fordham College at Rose Hill (FCRH) ’23, served an ace. The Colonials scored two more times, but the Rams did not let up the pressure. Aneliesa Cartledge, FCRH ’23, played aggressively and served two more aces, winning the set for Fordham, 25-19. This was Fordham’s first set win since a third set win over Davidson College on Sept. 25.

Cartledge was the decisive scoring force for Fordham in the first set, but it was the efforts of Mallory Lipski, FCRH ’23, that led the Rams to a 25-11 win, including a 10-point scoring run sparked by great teamwork and communication. After jumping out to a 9-4 lead-off of consecutive kills by Izzy Fichtel, FCRH ’24, and A10 Rookie of the Year Whitley Moody, FCRH ’24, Lipski served three back-to-back aces. Lipski finished the game with a season-high four aces. But she did more than just score, tallying 17 digs and breaking up potential kills by the Colonials all over the court.

The Rams were up 12-4 at the end of the run. This sequence of scoring and teamwork by Fordham shocked the Colonials, and two subsequent scoring attempts were blocked by Moody and Brzozowski. Brzozowski’s was one of the best blocks of the game as she expertly redirected a powerful GW attack from the backcourt. By the end of the set, the Colonials were in disarray and had to retreat to the locker room, slightly delaying the start of the third.

Fordham appeared sluggish at the start of the third set and conceded an early 5-1 lead to the Colonials. As the third set went on Fordham continuously fell behind, but a quick timeout allowed Fordham to regroup.

Bella Ureña, FCRH ’22, carried Fordham to its first win of the season. Ureña noticed the Colonials’ backcourt shot preference and kept herself in position to return every shot attempt with a kill. Fitchel and Aria De La Rosa, FCRH ’23, brought an intimidating energy throughout the entirety of the last set. Fitchel had just scored a total of 10 points for Fordham and De La Rosa had scored seven points. De La Rosa’s towering height of 6’2” helped protect her team’s momentum as she blocked five points.

The final moments of the game had audience members, coaches and players nervous as the game was 22-24 with Fordham in the lead. But a block by Brzozowski gave Fordham its first win of the 2021 season.

After dominating all three sets, Fordham’s volleyball team is in a better position to confidently take on any opposing team, setting the foundation for a strong season.