SJP Continues Fight for Club Status After Legal Loss: ‘We are not going anywhere’ 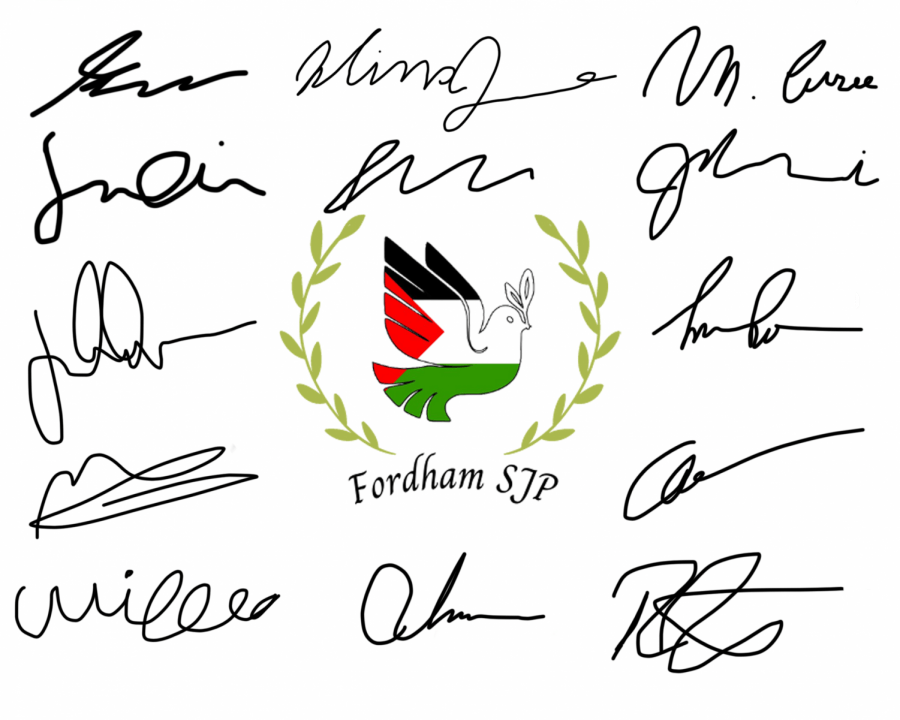 Students for Justice in Palestine received over 350 signatures from their letter-writing campaign, working to make their situation known on campus.

Continuing a six-year-long battle for the club’s existence on campus, Students for Justice in Palestine (SJP) launched a letter-writing campaign on Sept. 9 to demand that Fordham reinstates the group as an official club.

In January 2021, the New York State Supreme Court Appellate Division overturned the original ruling that mandated Fordham’s recognition of the club. Now, the decision to sanction SJP once again lies within the power of Fordham administrators.

“We were officially sanctioned for three semesters without any issues from the Office of Student Involvement or United Student Government,” said one Fordham SJP member who requested anonymity due to Canary Mission, a website that displays compiled information on undergraduate students who advocate for Palestine and seeks to defame them.

“Fordham’s attempts to intimidate us have not worked, and we are not going to be scared into submission,” another anonymous SJP member said. “We are not going anywhere.”

Veer Shetty, vice president of SJP and Fordham College at Lincoln Center ’22, said the letter-writing campaign is to push the issue of SJP’s presence on campus and to tell administrators “you can’t get away with brushing us under the rug.”
“We want this club to continue to exist and have been fighting for it to exist for so long, and now it is up to the younger students to carry that on.”Veer Shetty, vice president of SJP
Within the first 24 hours of the campaign’s publication, SJP garnered more than 350 signatures in support of the club’s recognition. Now, the total is more than 3,100 signatures as of Sept. 21.

SJP began working on the campaign in February 2021 and originally planned to launch it in March, but MPower Change, a Muslim advocacy organization, connected with the group and “changed everything.”

“We had people who were experienced with campaigns like ours helping us in its development,” one SJP member said. They also said the process was prolonged since MPower Change is a busy organization and had delayed responses.
Shetty, who has been at the forefront of the legal battle since February 2019 will graduate at the end of the fall 2021 semester.
SJP launched the campaign during Lincoln Center’s club fair. This decision was based on both the completion of the campaign and symbolism. When SJP was officially sanctioned in 2016, they tabled at the club fair in the special interests category.

“If Fordham did not take away our status as an officially recognized club, we would’ve been tabling on the 9th at 11:30 a.m.,” one Fordham SJP member said. “When we realized that it was Club Week, we thought it would be powerful to do (the campaign) then.”

The link to the campaign was distributed to the club’s mailing list and its social media platforms. SJP members also emailed it to most Lincoln Center clubs, providing an additional social media kit to encourage the clubs to post on their social media accounts as well. The campaign is also circulating among professors who have expressed support for SJP in the past.

Though SJP is not currently sanctioned by Fordham and does not receive a university budget or designated space on campus to hold meetings, the club is making plans for the semester.

Both the Jewish Student Organization at Lincoln Center and the Young Democratic Socialists of America at Rose Hill reached out to SJP to collaborate, which one member said they are “absolutely thrilled about.”

In addition to maintaining connections to other student organizations on campus, SJP is focusing on the preservation of its infrastructure to last beyond the graduation of its editorial board members.

Shetty, who has been at the forefront of the legal battle since February 2019 will graduate at the end of the fall 2021 semester.

“We want this club to continue to exist and have been fighting for it to exist for so long, and now it is up to the younger students to carry that on,” he said.